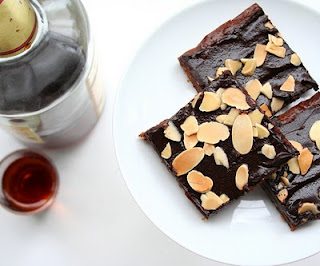 Ever since I was forced to go low carb, I’ve been on the hunt for a truly great, fudgey low carb, gluten free brownie recipe. It isn’t as simple as you might think. It isn’t just a matter of substituting almond flour for regular flour and low carb sweetener for sugar. Gluten and sugar combine in a seemingly magical way that allows for a crispy top and a gooey center that’s hard to replicate in their absence. I’ve tried a number of recipes and a lot of them end up more cakey than fudgey. Others use cream cheese to make them fudgey, but then to me they taste slightly more like cheesecake. They all have pretty good flavour, but they just aren’t what I am looking for.

A few weeks ago, I typed in “flourless brownies” instead of “low carb brownies” and got a whole new set of ideas. There were many hits for the ubiquitous black bean brownies, but black beans are hardly low carb so I wasn’t going down that road. But then I came across THIS recipe, which struck me as quite smart. There are flourless peanut butter cookies…why not spread similar batter in a pan and make them into brownies!?!? And why didn’t I think of that? They certainly looked rich and chocolatey and fudgey. Would they be as good with erythritol in place of the honey? 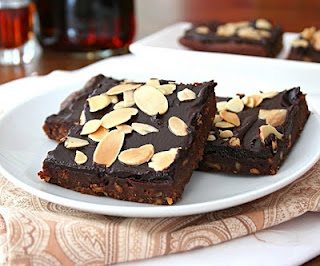 First, I had to get my hands on some almond butter. I had a little homemade in the fridge, but didn’t feel up to the task of making more just to make these brownies. As I happened to be hitting Trader Joe’s, I figured I’d pick some up there. I haven’t really liked Trader Joe’s Almond Butter in the past, and preferred my own. But this time, I picked up one that had roasted flax seeds in it as well, and from the moment I opened the jar, I knew there was a huge difference. It had a richer, more complex flavour and I liked it a lot more than the others I’ve tried. The roasted flax seeds add both flavour and nutrition, so you really can’t go wrong.

I also knew I’d be making more changes to this recipe than just subbing in erythritol for the honey. First off, as honey is a liquid, I needed something to make up some of the lost moisture, so I settled on greek yogurt. And where the recipe said to add in water if the batter seemed dry, I went with almond milk. I also decided to really amp up the almond flavour with a little almond extract. And glaze…to make them really appetizing, brownies need glaze. In keeping with the almond theme, I flavoured the glaze with some amaretto, and sprinkled some toasted sliced almonds on top. 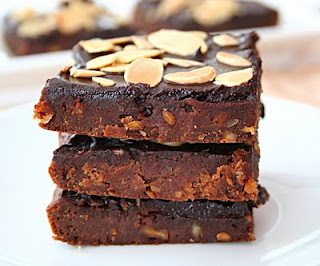 The Results: First, let’s discuss flavour. The flavour of these brownies is wonderful. Intensely chocolate, but with a lovely hint of almond/amaretto that doesn’t overpower. Now, let’s discuss texture. Yes, these are definitely fudgey and dense. They don’t have that crispy/fudgey thing going on that you get with flour-and-sugar brownies, but that might just be something that’s impossible to achieve with low carb ingredients. I did find the edges of these a bit on the dry side, but once you were 1/2 an inch in towards the center, they were lovely and moist. I think the dryness on the edges can’t really be helped, and if you were to try to underbake these, you’d get a gooey mess. The glaze certainly helps to add to the flavour and the consistency, and the crunch of the toasted almonds on the top was great.

There are some things I might do differently next time. First, I might increase the batter by about 50%, to get a thicker brownie. Obviously, this would change the baking time by at least a few minutes. I would also line the pan with a parchment sling, so I could lift the whole thing out. That way, I could cut off that little edge that was a bit too dry and then spread the rest with glaze. Center bits for everyone! 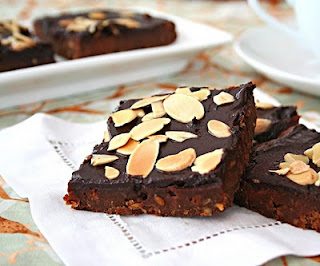 For the brownies, preheat oven to 325F and grease an 8-inch square baking pan.

Spread in prepared pan and smooth the top. Bake 16 to 18 minutes or until just set in center. Do not overbake. Remove from oven and let cool in the pan.

For the glaze, melt butter, chocolate and erythritol in a small saucepan over low heat, stirring until smooth. Stir in cocoa powder. Whisk in stevia and amaretto until combined. It will thicken slightly, so stir in vegetable oil to smooth it back out.