Hooray for homemade eggnog! This rich creamy keto eggnog features almond milk, whipped cream, and nutmeg for a traditional flavor. It’s easy to make and completely sugar free so you can indulge for the holidays. Dairy free and nut-free options too!

An updated recipe with an instructional video for my famous sugar free keto eggnog!

I’d never had homemade eggnog until the first time I spent Christmas at my in-laws house. Up to that point, I assumed it came in a carton and that was that. Like Athena from Zeus’s head, it sprung fully-formed from grocery store shelves. So my father-in-law’s homemade version came as quite a revelation. Thick and frothy and rich, it was truly a meal unto itself. It was gorgeous, and I’ve thought about it every year since (as I bought my fully-formed version from the grocery store).

Finally, when faced with missing out on one of my favorite holiday treats, I finally got up the gumption to try making homemade eggnog. So I simply followed the eggnog recipe in my America’s Test Kitchen Family Cookbook, swapped almond milk for milk and Swerve Sweetener for sugar, and hoped for the best. Turns out it was so easy. Who knew?

How to Make Keto Eggnog

What to do with Homemade Eggnog

Drink it on its own. It makes a wonderful filling keto drink.

Try it as a cocktail. Add an ounce rum, whiskey, or brandy and stir in. Or you can try my Sugar Free Coffee Liqueur. It’s amazing that way.

This sugar free eggnog recipes is also great in low carb lattes. It tastes better than the Starbucks version, I promise! Warm the eggnog base gently in a saucepan or the microwave. Be sure not to overheat it, as it may cook the eggs too much. Then mix with your espresso and top with the whipped cream.

Bake with it! The homemade eggnog base is delicious in muffins, cakes, and cookies. I’ve used it any number of keto baked goods, such as Eggnog Scones, Eggnog Donuts, and Eggnog Cheesecake Bars. 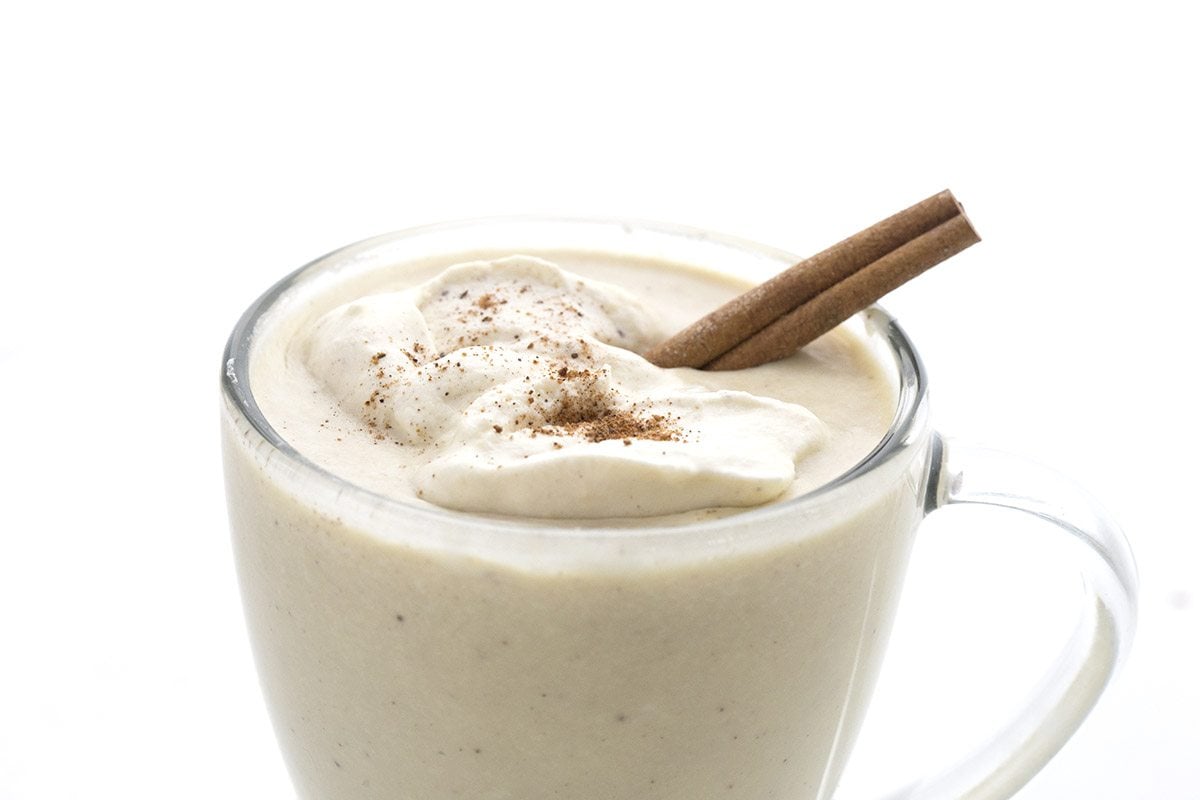 Also, don’t feel you have to make this whole big batch. You can halve the recipe easily. Just be sure to watch your keto eggnog as it cooks. With less liquid in the pan, it will cook more quickly.

Homemade eggnog is good for about 3 days in the fridge but shouldn’t be kept any longer than that. So if you aren’t sharing it with friends, a small batch makes the most sense.

Bottoms up! I am thrilled to discover that eggnog made with almond milk tastes just like the regular kind. It was wonderfully thick and rich, and there wasn’t a hint of almond flavour. With a little whiskey or rum, and the traditional sprinking of nutmeg, it’s a perfect low carb treat with which to ring in the holidays. Or have it alcohol-free as a breakfast or brunch treat. It makes a lot so if people in your house aren’t eggnog fans, just make a half batch, as I did in the video. 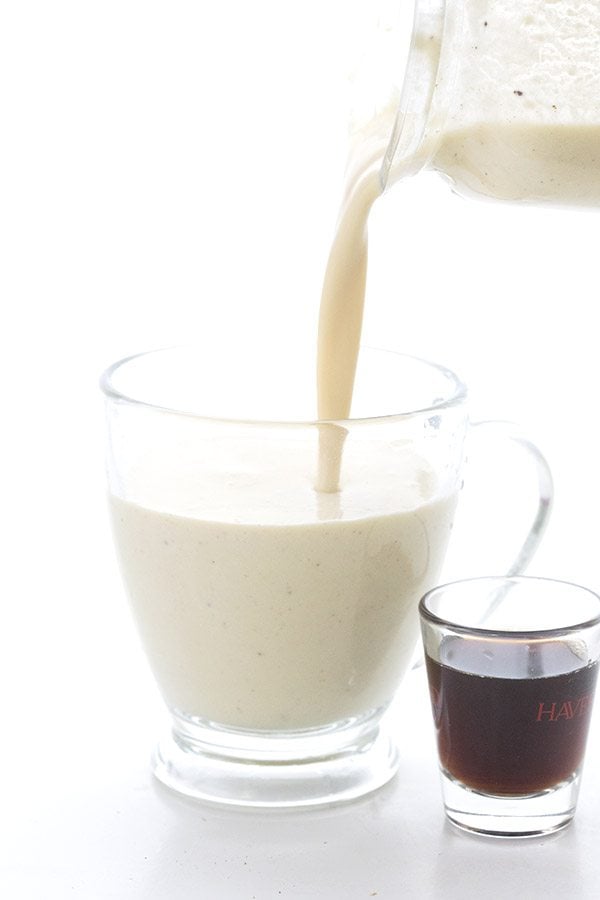 I decided to make mine with the whipped cream that the traditional recipe calls for, to make a really rich eggnog, but if you wanted to go dairy-free , you could add in some low carb coconut whipped cream after the custard is chilled. Either way, it’s delicious! 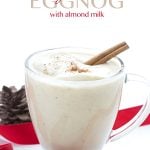 Healthy keto eggnog recipe! So easy to make and totally sugar-free. Like a holiday fat bomb in a glass.

Use coconut whipped cream in place of the whipping cream for a dairy-free version.

Serves 8. Each serving has less than 1 g NET CARBS. 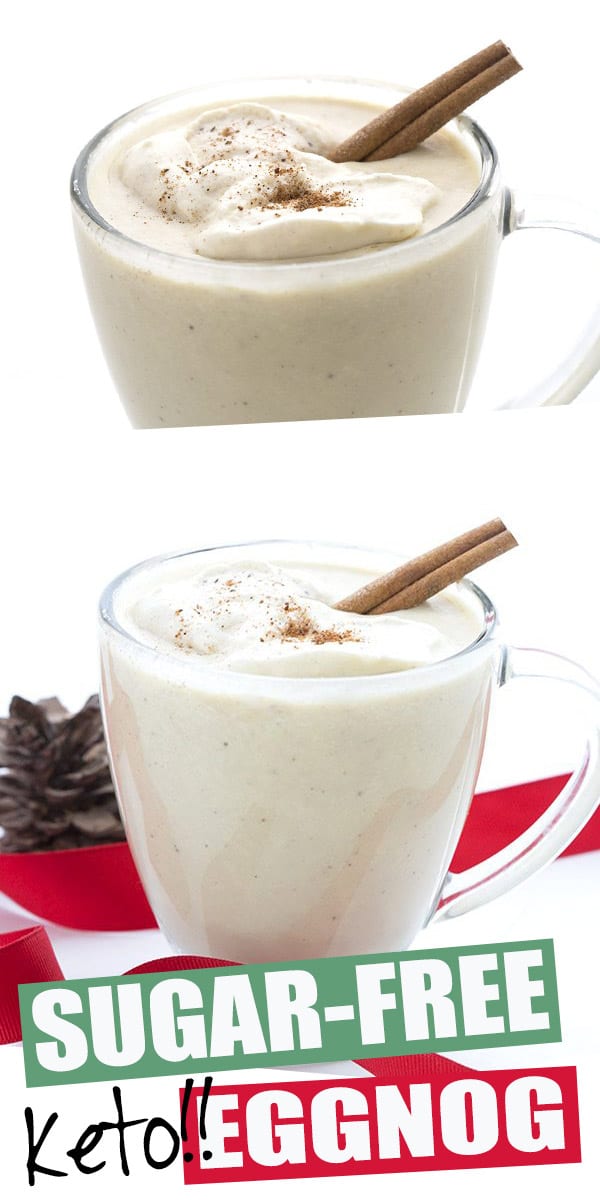