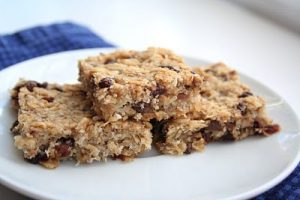 Well folks, it is time for me to face reality and accept the fact that I have a picky eater on my hands. Kiddo number three appears to have an exceptionally delicate palate and disdains all but a handful of food items. I believe this is what they call karma, or payback for all the years of grief I gave my own mother when I was a pint-sized picky eater. I’ve actually been wondering when this was going to happen, as my older two have robust appetites and enjoy a wide variety of foods. This little one, however, makes her distaste for things very clear, either by picking it up daintily and dropping it on the floor, or pushing any mouthfuls out with her tongue. It’s frustrating, to say the least. I suppose I simply have to wait it out and hope she outgrows it, as I did.

In the meantime, I have to be creative in trying to find foods she will accept. I was feeding her some oatmeal and mashed banana the other day and wishing I could make it in a more solid form so that she could feed it to herself. I believe that the guardian angels of parents-with-picky-eaters must have heard my lament, as that very afternoon I happened upon this recipe I’d saved long ago on Foodgawker and promptly forgotten about. At first blush, it looks like a delicious dessert, which is why, of course, it caught my eye in the first place. But a more detailed reading of the ingredients shows it to be a fairly healthy treat, and with a little tinkering, I knew it could be just what I was looking for.

The aforementioned tinkering entailed a few minor changes. I reduced the sugar because I knew that the bananas and the chocolate chips would make them sweet enough. I also omitted the nuts and replaced them with raisins and some shredded coconut for texture. I love nuts and think they would be an excellent addition to these bars. But as is the trend in many areas, my kids’ schools are nut-free and if these turned out as well as I hoped, I wanted to be able to pack these bars in their lunches. I also found that I had to bake them for much less time than the original recipe. 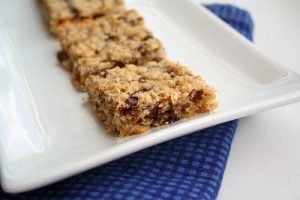 The Results: Success! These bars were a hit with all three kids and the first batch is already gone. On the first taste, my little one did what she does with all unfamiliar food…she spat it back out. But I persisted and gave her another taste and her eyes lit up. She’s been gobbling it for breakfast every day (and sometimes for dinner or snack too!). I had a little taste of them myself, and they are delicious. They are chewy and hold together well, but they are soft enough for a child with only a few teeth to mash with her gums. And the best part of all is how easy and quick they are to make. I will be making another batch today, and this time I am going to leave out the sugar entirely, as I think they will be just as tasty without it.

With an electric mixer, cream butter or coconut oil and sugar, if using. Add egg and beat until well mixed. Add mashed banana and salt and stir until incorporated. Stir in oatmeal, raisins, shredded coconut and chocolate chips and stir until combined.

Spread batter in prepared pan and bake 30-40 minutes or until firm and light golden brown. Let cool in pan and cut into squares.