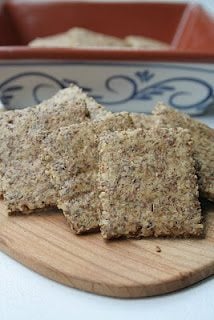 I’ve always been a snacker. And I think I always will be. The idea of three square meals a day with nothing in between is abhorrent to me. Really. Perhaps it’s because I’ve never been able to eat that much at one sitting. Or perhaps I don’t eat much at one sitting because if I did, the pleasure of snacking later on would be denied to me. Hmmmm, one of those chicken/egg questions, I suppose.

This “grazing” is said to be healthy for you, as long as your snacks don’t consist of Doritos and Ding Dongs. And as a general rule, my snacking is healthy (I’m not sure I’d recognize a Ding Dong if it smacked me in the face!). But cutting carbs makes snacking a bit more tricky. A lot of my previously healthy snacks are hard on my glucose levels – like many diabetics, a whole piece of fruit can make my blood sugar soar. In a snack attack, I sometimes look in my cupboard and realize that there is very little I can eat. So many snack foods are wheat, corn or potato based, and that just isn’t an option for me any more. Nuts and cheeses are wonderful, but they can get tiresome after a while.

I’ve been thinking of making my own crackers for a while, and I was inspired by a recent post on Elana’s Pantry. I did a little google-searching and found any number of good-looking low-carb cracker recipes, so I decided to do a little experimenting. This seemed like a good recipe to use as a base, but how exactly did I want to flavour them? Opening my spice cupboard, I caught sight of a container of Hidden Valley Ranch dressing mix that has been in there for several years. It gets used once in a blue moon when we’re too tired or lazy to make our own salad dressing. It made me think of one of my favourite pre-diabetes snacks, the Ranch flavoured TLC crackers from Kashi. I thought about just adding some of the dressing mix to my cracker dough, but that seemed like cheating. Not to mention not very healthy. I knew I could play with the spices to get an original ranch flavour without the preservatives and MSG that have allowed the dressing mix to stay open in my cupboard for years! 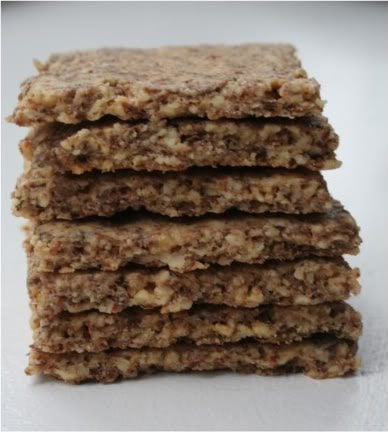 The Results: These are delicious and incredibly easy to make! They came out of the oven lovely and crisp, and they have a nuttiness to them that goes well with the ranch flavourings. The ranch taste is not overwhelming, and perhaps could be increased, depending on one’s preferences. And the basic recipe is so straightforward, it can be tailored for any variation of flavours. Left plain, they’d be a wonderful accompaniment to any number of soft or hard cheeses, hummus, or dips.

A few days on the counter in an airtight container, and the crackers are no longer as crisp as they were the first day. I suppose this isn’t surprising, given their lack of preservatives and the fact that the warm, humid summer is upon us. They still taste great, and a few minutes in the toaster oven and they are as good as new!

In a medium bowl, combine dry ingredients and mix well.

Add in butter and egg whites and stir until a cohesive dough forms.

Bake one hour or until crispy. Let cool and break into squares.

Total carbs for the entire recipe is 52g. I cut mine into about 30 one-and-a-half inch crackers, each cracker having 1.7g of carbs and 1.1g of fiber.