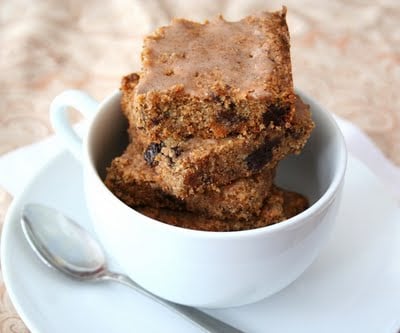 I have a long list of recipes I want to make. A very long list, indeed. I have tons of recipes saved in virtual recipe boxes all over the internet. I have dog-eared pages in cooking magazines, and little tabs stuck out of various cookbooks. And on top of all that, I have pieces of paper all over my desk with lists of my own ideas for recipe creation. There is some method to the madness and I have something of a mental list in my head of the order of recipes I want to make for this blog. And for the most part, I follow it. But every so often a recipe comes along that usurps the whole mental list completely and I have to make it right away. Or at least, I have to make a low carb version of it. If it’s so tempting that it takes precedence over the mental list, you know I have to be able to eat some of it.

This was one such recipe. I came across the full-sugar, high carb version of it last week on Tastespotting, and I nearly fell out of my seat. They are from a blog called Bakergirl, and I may owe a debt of gratitude to her for bringing them into my life. Well, not her version exactly, because I am pretty certain that her version would send me into a diabetic coma. To my eyes, the bars on her blog appeared to be crumbly coffee-flavoured shortbread studded with chocolate chips and with a cinnamon glaze. Which amounts to four of my favourite things all in one bar…coffee, shortbread, chocolate and cinnamon. You can perhaps begin to understand why these bars usurped the mental list and became a must-make-right-now recipe. 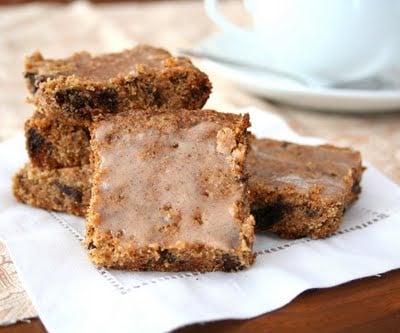 It took a bit of thinking to get an idea of how to make a low carb version of these gorgeous bars. I cut her recipe in half because I wasn’t quite sure how they would turn out and didn’t want to waste the ingredients if they were a failure. At first, I tried for a similar ratio of flour (almond flour, in my case) to butter as in the original recipe, but it quickly became clear that it was much too moist, so I increased the almond flour. Since they weren’t going to have any eggs, I added a little xanthan gum to help bind the bars together, so they wouldn’t crumble into dust, and a little whey protein powder for structure. And to get that brown sugar colour and taste, I used some Ideal Sweetener Brown (xylitol with a little molasses) along with erythritol and stevia. I didn’t have any sugar free chocolate chips at hand, so I chopped up a 90% cacao chocolate bar into small pieces. 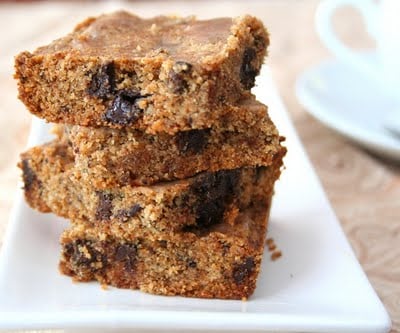 The Results: These bars were intended to be my dessert for the next week or so, but they didn’t last much longer than about 48 hours. I ate them for dessert, but I also ate them for breakfast and for snacks. They were so intensely good, so rich and flavourful, that I could hardly stay away from the pan. They were a tad crumbly but for me, this only added to their charm. I’ve always loved bars where I can scoop up a handful of crumbs out of the pan into my mouth after cutting them.

I wouldn’t have thought to add cinnamon into a bar like this if it hadn’t been a part of the original recipe, but it really does round out the flavour. The glaze on it’s own was delicious, I nearly licked the bowl clean after spreading it on the bars! The cinnamon makes me think of a cappuccino so I took the liberty of renaming my version of the bars with that in mind. 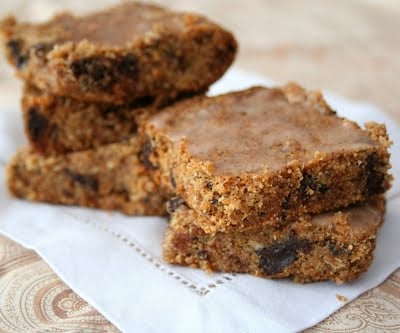 For the bars, preheat the oven to 325F and lightly grease an 8×8 inch pan.

In a large bowl, cream the butter with the erythritol, brown sugar substitute, espresso powder, vanilla and stevia until combined. Add almond flour mixture in two batches, beating until just combined. Stir in chocolate chips. Dough will be quite sticky.

Bake 20 to 25 minutes, or until bars are lightly browned (edges will be quite brown). Remove and let cool in pan 20 minutes.

For the glaze, whisk together powdered erythritol and cinnamon in a small bowl. Add milk and stir until smooth. Spread over bars and let cool completely. Cut into bars.