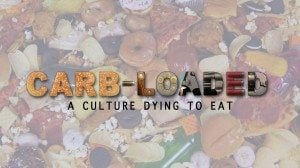 I am sharing another press release, which I know is highly unusual.  But this is a project that I think is worthy of all of our attention.  It’s for a documentary film called Carb-Loaded: A Culture Dying to Eat, which explores the rise of diabetes in Western culture.  One of the film-makers is Lathe Poland, whose story is somewhat similar to mine.  Active, healthy eater, with no family history of diabetes, he was diagnosed in 2010 with Type 2.  Like me, he wondered what the heck was going on and came to realize that our emphasis on carbs, carbs  and plenty of ’em may be to blame here.

I have been watching the Carb-Loaded team on social media for a while now and they already have some amazing interviews completed with leading medical professionals, researchers and nutrition scientists.  So far, I am highly impressed with the approach.

Making such a thorough documentary takes funding and since this is something of a “fringe” topic still, they are going the route of crowd-funding.  Right now, they need your (and my) support for their kickstarter campaign.  I have already contributed and I have also promised to share with my readers and friends.  Every dollar counts, so even if you can only afford to contribute $1, $2, $5, please do it. 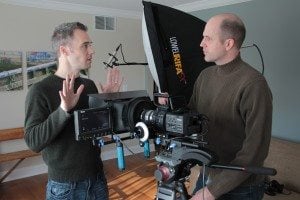 If you are living the low carb lifestyle, chances are you know how important this is.  We are still “fringe”, our diet choice is not accepted as healthy and yet we all know it is.  We have seen the changes in our own bodies, our blood sugars, our cholesterol levels but the conventional nutritional community keeps touting the same old advice.  Please help me spread the word about this important project.

Donate to the Carb-Loaded Kickstarter Campaign

Article on Carb-Loaded:  A Culture Dying to Eat

Carb-Loaded: A Culture Dying to Eat, is a documentary film being produced by The Scene Lab, LLC a production company in Bethel, CT.  The film will explore the exploding diabetes epidemic. Not by coincidence one of the films creators, Lathe Poland was diagnosed with Type 2 diabetes in 2010. Lathe always thought of himself as a healthy eater. He rarely ate sweets, never drank soda, and had no family history of diabetes. Why would a seemingly healthy thirty-something man like Lathe get a disease like this?  The misconception that he had, like many people was that diabetes is either hereditary and it’s not your fault, or you eat junk food like it’s going out of style and you end up diabetic.

“My general practitioner wanted to start me on three different prescription medications, IMMEDIATELY. I guess what alarmed me was the ‘matter of fact’ rubber stamp approach,” recalls Lathe.  He wondered if this was the way it was for everyone?  Feeling discouraged, he resigned himself to the fact that he would be taking medication for the rest of his life.

Then came a moment of clarity.

“I remember the day I heard a news story  on NPR about cases of diabetes and pre-diabetes skyrocketing.  For me it was the tipping point…for my own sanity, I needed to piece this puzzle together.”  The news story was about the Journal Pediatrics study of pre-diabetes and diabetes cases in children ages 12-19. In the year 2000, 9% of that group had pre-diabetes or diabetes. Eight years later that number had grown to 23%.

“I realized that there was more to the story then my mater-of-fact diabetes diagnosis,” says Lathe.  “One in four people are pre-diabetic or diabetic, and research indicates that number is rising fast.”

Was our lifestyle, culture, or food ecosystem, enabling this shift? Or was it the catalyst? And, more importantly, could this wave of momentum be reversed?  These are the questions that will be answered in the film Carb-Loaded: A Culture Dying to Eat.  Leading nutrition scientists, doctors and researchers will weigh in on this unparalleled epidemic. Additionally, the film will explore our connection to a food culture that may be responsible for the most expensive healthcare crisis in modern memory.

“This is a bigger project than anything we’ve ever tackled,” states Eric Carlsen, the other half of The Scene Lab. “We produce commercials and marketing pieces, and Lathe was proposing we create a full length documentary.” Eric continues, “a project like this takes a lot of money…how in the world were we going to pay for this???”

Lathe and Eric will be producing the film by means of a relatively new financing approach called crowd-funding. Crowd-funding allows independent filmmakers to raise capital while growing their market at the same time. It makes it possible to “pre-sell” a creator’s work before it is made. There are a number of popular crowd-funding companies on the internet, but Lathe and Eric will be using Kickstarter. So in the instance of a film, people can pre-purchase the movie on DVD. Once the goal amount is raised, the film can start production.

Eric explains, “The great thing about crowd-funding is that once you’ve finished making your movie, there is already an audience waiting for delivery of your film.” One aspect that the audience will no doubt appreciate is that if the project doesn’t get enough support no one pays anything. This avoids the problem of a few people supporting a project that never gets produced, and being out the funds they contributed. “It’s a win win for everyone involved,” continues Eric. “The filmmaker gets the financing they need and the audience gets content they’re interested in.”

As of the writing of this article (Jan. 2013) Lathe and Eric have not started a campaign at Kickstarter yet. They are building their following in order to have a successful launch when they do. If you would like to receive more information about the film, sign up for updates at the Carb-Loaded website: www.carbloaded.com

So what exactly is this documentary all about?
In short, it’s a journey of discovery, to find out the reasons behind the enormous spike in various forms of diabetes, over the last three decades, and what can be done about it.

Oh…I get it another movie about how we eat too much and we’re all going to die.
Not really. Well, yes…as a culture we do certainly eat too much. But more importantly it’s what we’ve been eating that may be the biggest problem. Refined and processed foods, especially processed carbohydrates have become a staple of our culture, and we are reaping the consequences.

What makes Lathe and Eric experts on the topic?
Nothing. They are not claiming to be experts in any way shape or form. They are filmmakers talking to a variety of experts in several fields who will present some very interesting data.

When will they start filming?
They already have begun some of the parts and pieces necessary, including some of the B-Roll. However, filming begins in earnest after they complete their crowd-funding campaign on Kickstarter.com in March of 2013.

When will they finish filming?
Filming should be complete and post-production is targeted to begin in late 2013. Lathe and Eric hope to release the film in early 2014.

Okay…not that I want to, but hypothetically how could someone help?
First of all spread the word. The more people who know, the better. We encourage people to sign up on http://carbloaded.com for updates or follow us on Twitter (@Carb_Loaded) or Facebook (Carb.Loaded). If people would like to donate to our campaign to fund all of the costs associated with acquiring the many interviews, they can do so when we launch our campaign on Kickstarter.com.

I have other questions or thoughts that you didn’t cover…
No problem. Contact us at [email protected]