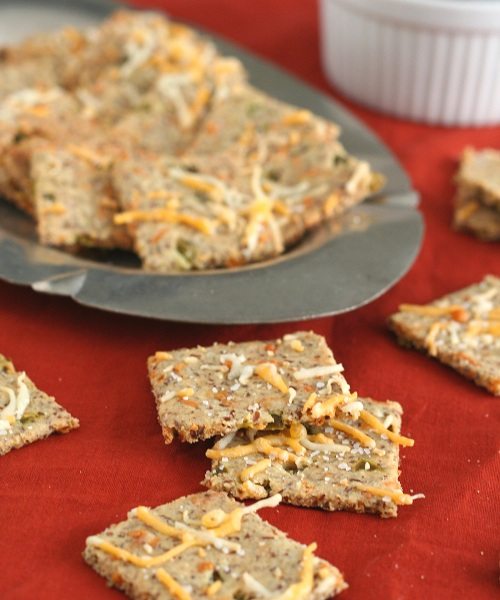 I had intended to post these homemade Cheddar Jalapeno Crackers yesterday, but I decided to hold off for a day to help out a friend.  It might seem strange that a low carb cracker recipe can be used to help someone out, but it is true nonetheless.  And in this case, it all seems very serendipitous.  See, I just so happened to be on Twitter on Tuesday and I am rarely on Twitter these days at all.  And Twitter moves fast, very fast, so tweets from friends can be missed easily.  But I just so happened to catch a desperate call for guest posts from a blogger friend who had just found out she had to take a business trip and wouldn’t be able to post any of her own recipes.  Since I had this recipe all ready to go, photos and everything, I said she could have it.  Aren’t I the best???  And don’t feel too sorry for Claire, of The Realistic Nutritionist, as her “emergency business trip” just so happens to be taking her to Mexico.  Oh, that’s a hardship indeed! 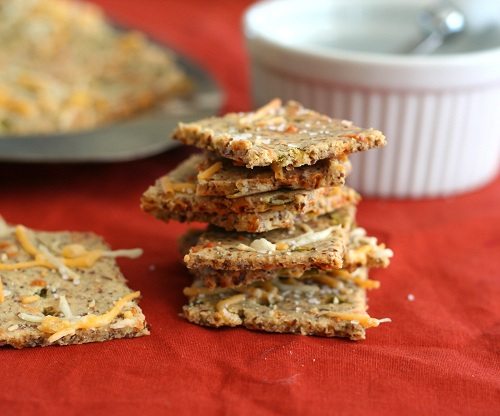 The inspiration for this recipe came from another blogger friend, Kiersten of Oh My Veggies.  Although she and I differ significantly in our dietary preferences (she’s a vegetarian, I am an unabashed carnivore, she eats gluten, I do not), I find plenty of flavour inspiration on her blog.  And I just so happened to see her cheddar jalapeno crackers last week and get inspired enough to get straight to work.  The base of mine is completely different (almond and flax vs. wheat flour), and I added in more jalapeno, but the basic idea is the same.

I think these might be the best crackers I’ve ever made.  I took the time to roll the dough as thin as I could, while still making sure the edges weren’t so thin they would burn before the middle cooked.  And sprinkling them with sea salt or kosher salt before baking meant that had a true cracker saltiness.  And, let’s be honest here…the cheddar and the jalapeno don’t hurt either!  So please do my “poor” friend Claire a favour as she languishes in Mexico, and hop  on over to The Realistic Nutritionist for the recipe.