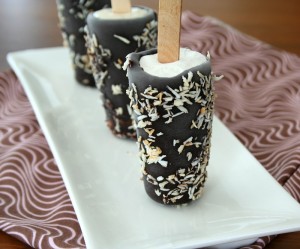 My husband is always clamouring to be featured in my blog.  I suppose he thinks it is a reflection of my love for him, if I write about him.  Well, you asked for it, darling.  I am going to tell my readers a story about you that is only minimally connected to the recipe at hand.  And we’ll see if you want me to feature you again after that!  This story is about two young people, a far away island in the Caribbean, and rum.  A whole lot of rum.

Imagine, if you will, a very, VERY tall young man who comes to visit his girlfriend while she is working on the beautiful island of Barbados.  She shows him around the island that has been her home for the past few months, and they take in all the sights, play in the ocean, and bask in the sun.  One late afternoon, they decide to take a tour of the Mount Gay Rum Distillery, one of the oldest rum distilleries in the world.  They manage to catch the very last tour of the day, and in the manner of lovers who have been apart, they hang back from the group and whisper smart ass, goofy comments, paying little attention to anyone or anything but each other. 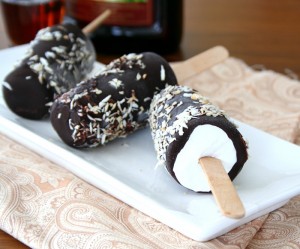 The tour winds up in the Mount Gay tasting room, where everyone can have a taste of the various grades of rum and buy as many bottles as they like.  Being the last tour of the day, the bartender, astonishingly named Chesterfield Brown, is a little restless and giddy.  He spies the tall, young American and challenges him to a rum shooter contest.  Suddenly, all eyes are on the man and never being one to back down from a challenge, he heartily accepts a snifter full of at least 4 ounces of dark Mount Gay Rum.  Whoever finishes first, wins.  Our hero closes his eyes, opens his throat and pours the contents straight back, draining the glass in one large gulp.  Chesterfield is vanquished!  And our hero seems none the worse for his consumption of liquid fire. 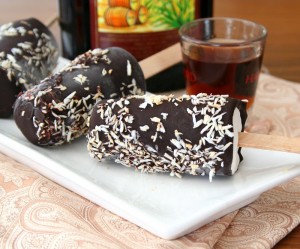 The tourists wrap up their day and start to head back to their hotels, but the young woman notices something amiss with the hero.  He has propped himself up against the wall in the bar and looks as if he’d topple over if not for the support.  He admits to some wooziness and clearly needs something in his stomach to soak up the alcohol.  Chesterfield graciously steps in and he and the young woman somehow manage to get our hero back to Chesterfield’s house, where his wife fills their bellies with copious amounts of traditional Bajan food.  The day is saved, more rum is drunk, and a fast friendship is formed between all parties.  The day at the Mount Gay Rum distillery lives in infamy. 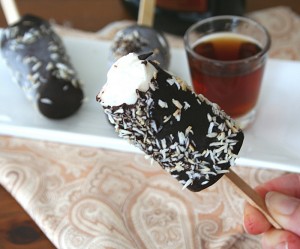 So rum and I, and my husband, have quite a history.  And when I thought about making my Chocolate Fudge Pops with coconut milk, they ended up evolving into this recipe.  A delicious coconut and rum popsicle dipped in dark chocolate and rolled in toasted coconut.  Yum! 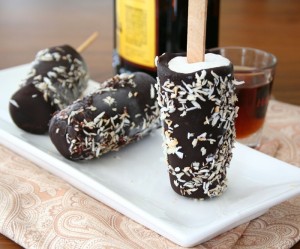 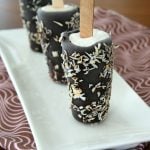