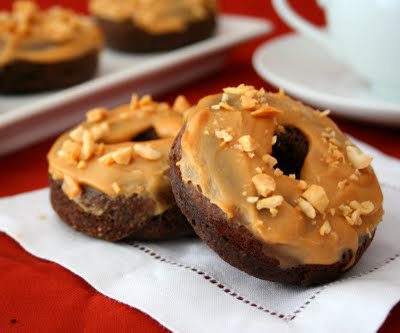 Stop me if you’ve heard this one before: I love peanut butter. Oh wait, that’s right. You have heard this one before…about a gazillion times. As it turns out, I also love my little donut pan. It was an impulse purchase, but one that has turned out to be tremendously useful for such a specialized kitchen gadget. I hardly needed it, on top of all the various bakeware I already own, but I had a gift certificate to a kitchen supply store and thought it looked like fun. It sat in my bakeware cupboard for months, untouched, until I dreamed up my Blueberry Pomegranate Donuts. But it worked so remarkably well for those that I knew it would get used again. And again. And again.

It was really only a matter of time before I married my two loves, peanut butter and donut pan. After all, when one has two beloved friends who are unknown to each other, one tends to get pretty excited to introduce them. Sometimes this doesn’t work out that well, the chemistry between two individuals just not quite mixing the way one would hope. But I had little to fear here, being quite certain that peanut butter and donut pan would get along. Well, let’s be fair, I did introduce a third party into the mix, namely chocolate, who I thought would help ease the transition. And rightly so, as chocolate is always the perfect party guest and has a way of putting all other ingredients at their ease. And so, chocolate donuts with peanut butter glaze were born. Made with peanut flour, naturally. 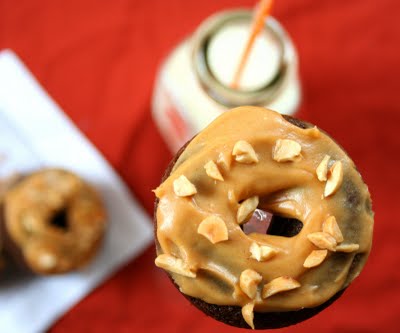 The funny thing is that I’ve never been a huge donut person. Muffins, I love. Quick bread, I love. Donuts, ho-hum, they’re okay. But we’re talking store-bought donuts here, and these homemade donuts are really a different creature altogether. Because really, donuts from a donut pan are muffins or quick bread in disguise. They’re shaped like a donut, but they have the density and texture of a muffin. They aren’t fried, and they tend to be much more reasonably apportioned compared to what you might get at your local coffee shop. The best part for me, as a mother of three, is that I get to tell my kids that they are having donuts for breakfast and see their sweet faces light up with joy – all the while serving them something that is quite healthy and good for them. 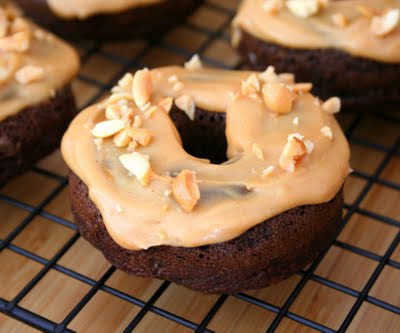 The Results: No false modesty here. I love these donuts. So do my kids. They were easy and quick to whip up. I was up a bit early one morning and had them ready to go before my kids were even awake. The only thing that stopped us from devouring them all was that I still needed to take pictures! I am really quite impressed with how moist they are, too. After they cooled on the baking racks, I thought the outsides seemed a bit dry. But I realized my fears were baseless when I bit into one and it was perfectly tender and cakey.

***Edited to add – I’ve heard from several readers that their batter ends up too thick. There are several varieties of peanut flour available and the defatted variety soaks up a lot more liquid than the non-defatted. I used the non-defatted here. I am adding some additional instructions below for those of you who are using defatted or partially defatted peanut flour. 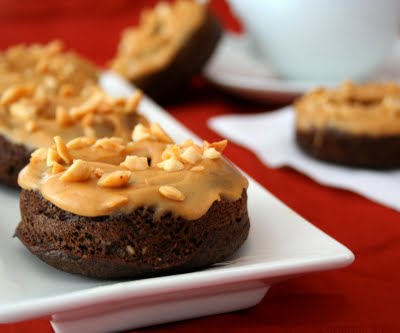 Preheat oven to 325F and grease a donut tin.

*If you are working with defatted or partially defatted peanut flour, you will need to add additional liquid. Simply add more almond milk, 1 tbsp at a time, until you get a consistency like muffin batter.

Fill holes of donut tin 2/3 full (you will likely have to do 2 batches). Bake for 18 to 20 minutes, or until set and donuts spring back when touched. Let cool in pan 5 minutes and then flip out onto a wire rack to cool completely. Repeat with remaining batter.

For the glaze, place peanut butter in a microwave-safe dish, and warm gently in 20-second intervals until peanut butter is very soft. Stir in whipping cream and almond milk until smooth and well combined. Stir in powdered erythritol and stevia. Spread glaze onto donuts with a knife. The glaze won’t be pourable, but is should be fairly thin and spreadable. If you find yours too thick, add another tablespoon of almond milk until it thins out a bit.

**Not all donut pans are created equal. Mine is made by Fox Run and appears to be somewhat smaller than those made by Wilton, although it is not a mini-donut pan. So you may only get 6 donuts out of this recipe.