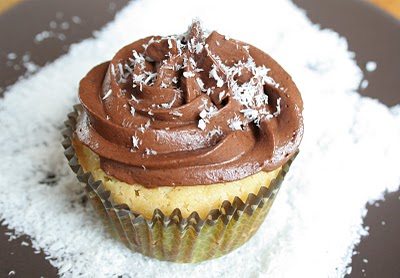 Two cupcake recipes in a row, this is odd! I know that there is quite a trend out there for making fancy cupcakes and that there are whole blogs and cookbooks dedicated to subject. As a matter of fact, there is a whole chain of stores in one of my favourite cities in the world, Vancouver, that sells nothing but cupcakes (and is aptly named “Cupcakes”!). So you might think that I am just jumping on the already crowded bandwagon. Truth of the matter is that, although I like cupcakes, they are hardly my favourite dessert. Give me a dense, chewy brownie, cookie or dessert bar over a cupcake any day.

What makes cupcakes enticing to me is the fun that comes in baking and decorating them. With a decorating set, a few fancy tips, some food colouring and coloured sugars, you can while away quite a few pleasant hours. For my son’s fifth birthday last year, the request was for “superhero colours”, so I settled on bright blue frosting with red sprinkles and a red number 5. They were hideous, but he loved them!

Obviously, traditional cupcakes made with sugar and flour are a big no-no for me to eat now. So I’ve had in my head for a while to make some with coconut flour. I’ve been experimenting with coconut flour with limited success, up to this point. I made some apricot streusel muffins that turned out way so moist that they were almost mushy. I tried chocolate chip cookies that were so dry, I needed to drink a full glass of water to get them down. My cinnamon rolls were tasty but didn’t rise as much as I had hoped. So I was determined to get these cupcakes right. And I didn’t want to hide the coconut flavour, I really wanted to TASTE the coconut in these. I took some of my cues from THIS recipe, but in the end, I played with the ingredients until the batter felt like it was the right consistency. Then I popped them in the oven and crossed my fingers.

I also wanted to make a low carb frosting that really resembled buttercream. I love the coconut/chocolate combination, so I wanted a rich chocolately buttercream to top my coconutty cupcakes. Again, I just played with the ingredients until I had something that felt (and tasted) right. 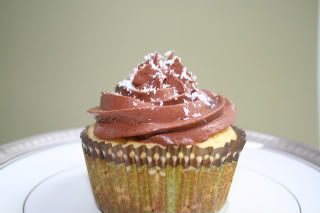 The Results: Finally, a coconut flour recipe that really worked! As always with coconut flour, the cupcakes are dense, but they are moist without being wet and they have a nice, strong coconut flavour. They aren’t overly sweet but nicely balanced by the chocolate buttercream on top. They’d be a good base from which to make various coconut muffins as well, so I think I have a recipe I can really play with.

As for the chocolate buttercream, it’s delicious and thick and chocolately. I sweetened it only with stevia but it doesn’t have a bitter aftertaste at all. I used both cocoa powder and unsweetened chocolate to get a rich chocolate flavour. I could easily see doubling or tripling the recipe to use this on layer cakes as well.

Word to the wise: since coconut flour recipes always take a lot of eggs and oil, be sure to store these in the fridge after the first day so they don’t spoil. I like them straight out of the fridge but you can let them come to room temperature for half an hour if you prefer.

For the cakes: Preheat oven to 350F and line 6 muffin tins with paper liners.

Divide batter evenly among prepared muffin tins. Bake 20-25 minutes or until the tops of cupcakes spring back when touched lightly and a tester inserted into the middle comes out clean. Let cool in pan.

Whip cream with an electric mixer until it forms stiff peaks. Set aside.

In a medium bowl, beat cream cheese and butter together until smooth. Beat in cocoa powder and stevia or other artificial sweetener. Carefully fold in whipped cream and stir until combined. It may look slightly lumpy at this point. Pour melted chocolate into bowl and mix with a rubber spatula until chocolate is combined and mixture is smooth.

Serves 6. Each cupcake has 6.3 total carbs (not counting erythritol, if you use it), and 3.3g of fiber. Each serving of buttercream has 2.8g of carbs.