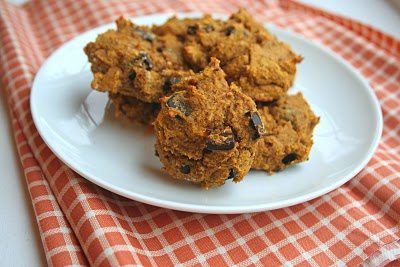 Do not be alarmed. No one was hurt while conducting these experiments. Except, perhaps, a cup of pumpkin puree and some coconut flour. And maybe my pride. I thought I was getting pretty good at working with coconut flour, but this substance continually surprises me. It simply refuses to behave like wheat flour, and resists me most vehemently when I try to make it do what it’s carb and gluten-laden counterpart would do.

I had a brilliant idea…pumpkin fritters made with coconut flour. I had come across several pumpkin fritter recipes that sounded delicious and I didn’t think it would be terribly hard to make a low carb version. Using these recipes as a guide and knowing what I thought I knew about coconut flour, I mixed up a batter that looked, tasted and smelled the part. I heated up my oil for deep-frying, dropped in a little batter, and it sizzled delightfully. So far, so good. So I dropped in a few tablespoons of batter, hoping for the best and expecting some golden brown balls of pumpkin deliciousness. And that’s when it all fell apart. Quite literally! The batter began to disintegrate and spread all over, floating on top like the remnants of the BP oil spill! As it began to brown, I scooped it out and gave it a taste. It wasn’t awful, but it wasn’t good either. It has soaked up so much oil, that’s all you could taste. 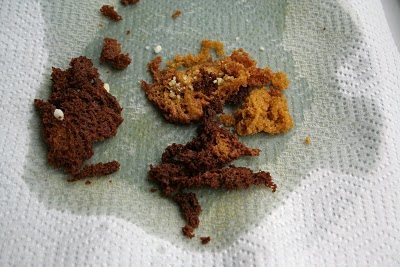 I was a little disappointed, but I rallied and regrouped. So they weren’t going to be the deep-fried, donut-style fritters of my dreams. Fine. Let’s make them like pancake-style fritters. How hard could that be? After all, I had made coconut flour pancakes before. I had no question that this would work, but pride goeth before the fall. My first attempt didn’t hold together at all, so I added a bit more coconut flour. My second attempt wouldn’t spread in the pan without being flattened by the spatula, and even then, it wouldn’t hold together. Trying to flip it to cook on the other side was disastrous, there was simply no way to make it stay in one piece. It did, however, taste a far sight better than the other fritters. In fact, I made a full breakfast from the the bits and pieces of coconut flour pumpkin fritter/pancake that ended up emerging from my pan. 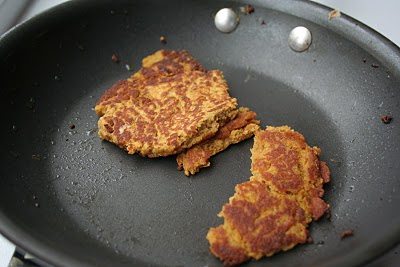 I still had about half the batter left and I was flummoxed. I didn’t want to throw it away, as it tasted pretty good, but what the heck could I do with it that would actually resemble something someone wanted to eat??? Finally, I tossed in some almond meal, a handful of chocolate chips, formed it into balls and baked it as cookies. Even that was only semi-successful. They took a long time to bake and still remained overly-moist in the middle. The flavour was decent, nothing to write home about, although my little ones liked them well enough. Don’t read anything into that, they are not the most discerning palates and it was likely the chocolate chips that drew them in! I won’t even provide you with a recipe, for when it comes to low carb, gluten free pumpkin cookies, I know I can do a lot better than this!

The moral of the story here? The take-away point? For me, I suppose it’s that I shouldn’t assume I know what I am doing when it comes to coconut flour. Or perhaps it’s simply that everyone, no matter how good a cook, has wonderful ideas that don’t pan out. But it’s also important to experiment, and even when it doesn’t work out as you had imagined it would, it can be rather fun. And if you’re lucky, there might be something semi-edible at the end. When push comes to shove, just throw in a handful of chocolate chips and feed it to your kids!

Feel free to make me feel better and share your recipe experiment disasters. Please? My ego could use a little boost!

Leave a Reply to A SPICY PERSPECTIVE Cancel reply