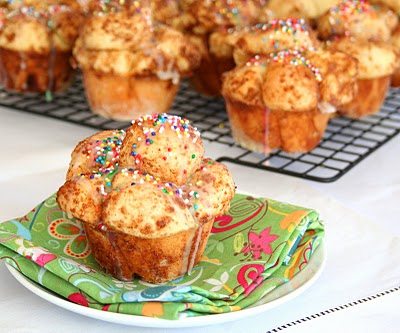 Tomorrow is the first day of April, April Fool’s Day, and it seems only fitting that Mother Nature is about to play a big trick on us here in New England. After the winter we’ve had, it has finally felt a tiny bit like spring. Bright, sunny, and with the thermometer slowly creeping upwards I actually got out to the park yesterday with my son, and it was glorious. But now they are calling for a Nor’easter tomorrow. You’ve heard of our famous Nor’easters, yes? Wind, rain, snow. The joke’s on us! Mother Nature just wanted to see us put away our gloves and hats before she decided to dump on us again. She wanted to seduce us with a tiny taste of spring before blasting us with one last (oh lordy, please let it be the last!) round of snow. 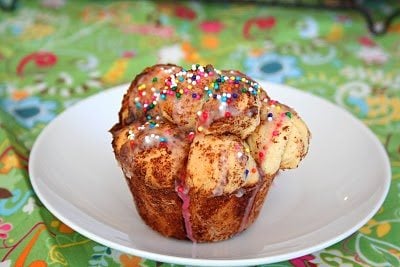 Nevertheless, time marches on and in advance of Easter, my kids and I had some fun in the kitchen. I saw this idea in the April issue of Disney Family Fun, a magazine that neither my husband nor I recall ever signing up for. It just started coming to us, so it must have come free with some other subscription. It’s not exactly the sort of magazine we would seek out, but I always flip through it a bit before tossing it in the recycling bin, and these cute cinnamon buns caught my eye. Much like monkey bread, you take sweet dough and make little balls rolled in cinnamon sugar. But in this instance, you arrange them carefully in muffin tins, so that they come out looking like little flowers, with a center ball surrounded by five petals. 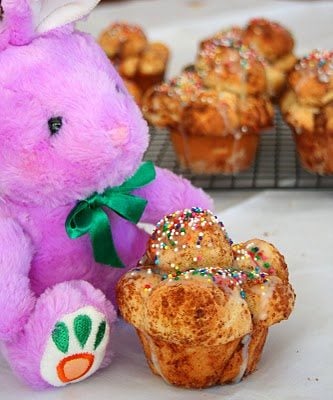 Or at least, that’s the idea. The ones in the magazine all look lovely and uniform. But you try letting a 6 year old and a 4 year old have their way with balls of dough, some melted butter and some cinnamon sugar and see what yours end up looking like! I couldn’t quite get the kids to understand how to fit the first five balls of dough at the bottom and then make a hole to fit in the sixth ball in the center. In most cases, the center ball was just plopped on top of the others. But we had a lot of fun and made an unholy mess in the kitchen. I made the dough ahead of time but then let the kids go to town on dipping the balls in butter and sugar, and then drizzling in glaze and sprinkles afterwards. They thoroughly enjoyed themselves and I have to say, it was worth all the clean-up afterwards. 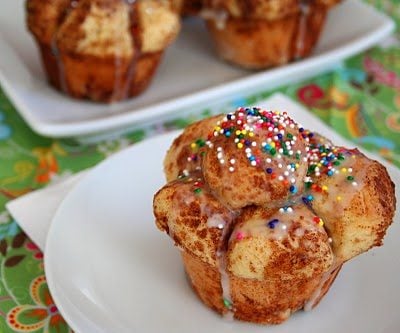 Place water in bowl of stand mixer and sprinkle yeast over. Let stand until bubbly, 5 to 10 minutes. Stir in butter, sour cream, sugar, egg and vanilla. Beat in 2 cups of flour, the salt and baking soda until incorporated. Add remaining flour and continue to mix until a smooth, soft dough forms.

Turn out dough on a lightly floured surface, reserving mixing bowl. Knead dough until smooth, about 3 minutes, adding in more flour if dough is sticky. Do not exceed 2 additional tablespoons of flour.

Place dough back in mixing bowl and cover with plastic wrap. Let rise in a warm place until doubled in size, about 1 hour.

In a small bowl, mix cinnamon and sugar for coating. Place melted butter in a small, shallow dish.

Lightly grease a 12-cup muffin pan, and then flour the cups and tap out excess flour.

Punch down dough to deflate. Form into a long cylinder and then divide into 12 equal portions. Divide each portion into 6 equal pieces and roll each piece into a ball.

For each bun, coat six balls with melted butter and then roll them in cinnamon sugar. Arrange five balls in the bottom of a prepared muffin cup. Using your fingertip, make a small well in the center and press in the sixth ball.

Repeat with remaining dough and muffin cups. Cover buns loosely with plastic wrap and let rise in a warm place until puffy and have doubled in size, about 40 minutes.

Preheat oven to 350F. Bake buns until golden, 20-22 minutes. Let cool in pan 5 to 10 minutes and then tilt pan and gentil tap on a work surface to release buns. If needed, use a knife to help release them.

Place buns on a wire rack over a cookie sheet (line with waxed or parchment paper for easy clean up). In a small bowl, mix glaze ingredients and stir until smooth. Drizzle each bun with glaze and sprinkles, if using.