Low carb ice cream with all the flavors of a rich, spicy gingerbread. Perfect for holidays in warm weather climates, or just because you love ice cream even in winter. 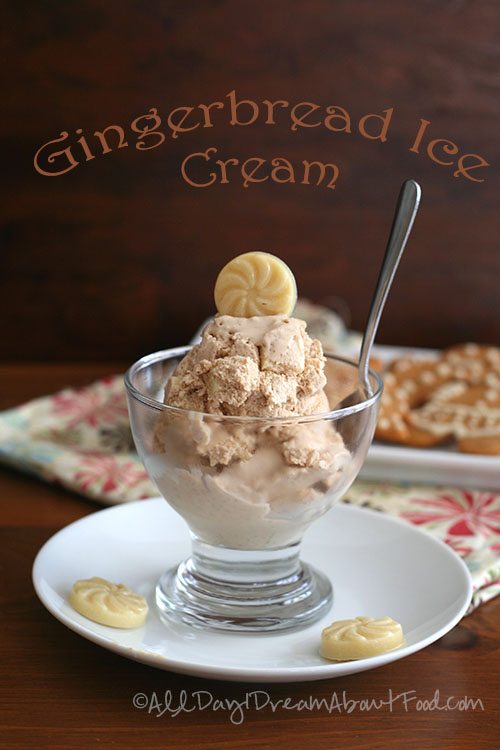 It’s so cold and snowy out now that ice cream is just about the last thing on my mind. It doesn’t seem like a very fitting dessert this time of year, that creamy coldness melting on your tongue and sliding down your throat. Though eating ice cream would only reduce one’s body heat infinitesimally, the very thought makes me chilly. Unless, of course, it is full of warm winter spices like ginger and cinnamon; spices that conjure up images of warm fires and chestnuts roasting and singers caroling and that sort of thing. Then maybe, just maybe, you could persuade me to eat a little ice cream. And I suppose that since some of you live in places where it isn’t very cold, I ought to be considerate and bring you a cold creamy treat that cools you off while warming you to your toes. This low carb gingerbread ice cream is just the thing. 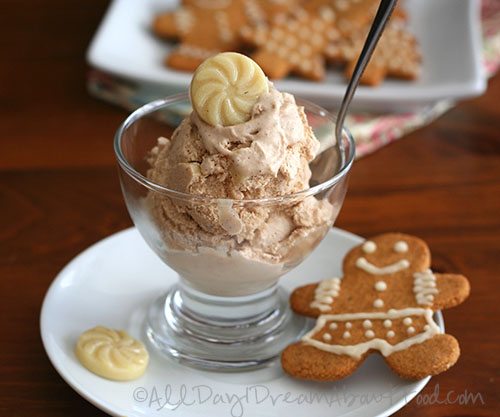 The truth is that I actually created this recipe sometime before Thanksgiving, when it was cool but not frigid here in New England. It was a little easier to take when the mercury stayed above the freezing point and there was nary a flake of snow in the air. Now that it’s December and we have a thick cover of white stuff, I have to jack up the thermostat just to write about it. I’d much rather cozy up with a cup of hot chocolate and a few low carb Christmas cookies than eat or write about ice cream.

But I will say that this was lovely ice cream, with an intense gingery bite that did rather offset the coolness. It truly tasted like gingerbread, but in semi-solid, frozen form. And I think that part of its success was deciding to leave the fresh ginger in the mix instead of straining it out. I minced it really finely and steeped it with the hot cream and almond milk, and then just left it in. I also used two full teaspoons of ground ginger, along with cinnamon and cloves. The end result was amazing, and what my husband called “sophisticated”. With that epithet, I was certain my kids wouldn’t like it, but they did. They downright loved it. 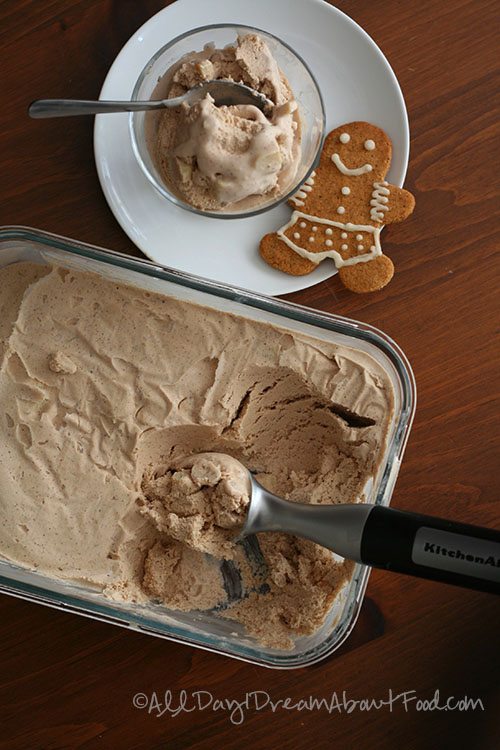 Ginger has some wonderful health benefits, including relieving nausea and reducing inflammation, so one could say this ice cream is actually very good for you. But if you prefer a little less gingery kick, feel free to cut back on the fresh ginger and/or the powdered ginger in the recipe.

And can I confess that it also makes for a really great boozy milkshake with some added cream and a little dark rum? I can’t tell you how I know that, I just do. Call it gut instinct. 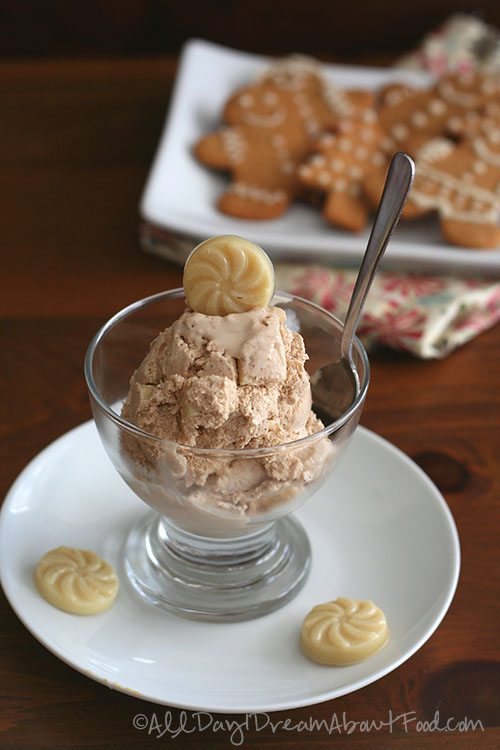 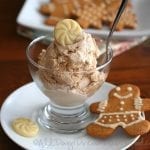 Low carb ice cream with all the flavors of a rich, spicy gingerbread. Perfect for holidays in warm weather climates, or just because you love ice cream even in winter.

Serves 8. Each serving has 5 g of carbs.