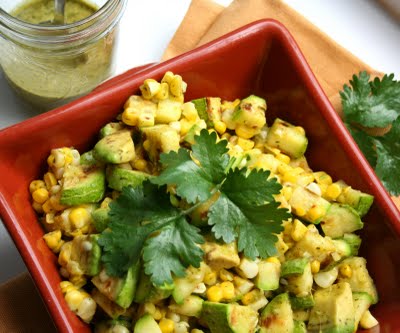 Cilantro. It’s one of those love it or hate it herbs. I know several people who swear it tastes like soap. Soap? Really? I rather think it tastes like cilantro, but other than that, I can’t quite describe the flavour. I love it though. If memory serves, I can pinpoint the first time I ever tasted it. I was home from university for summer vacation and it was too hot to cook. My mother had thrown together a black bean salad with red peppers and cilantro. I’d always like bean salad well enough, but I knew instantly that there was something different about this one. Different in a good way. There was a flavour there that I couldn’t quite name but I loved it. I’ve been a cilantro devotee ever since. 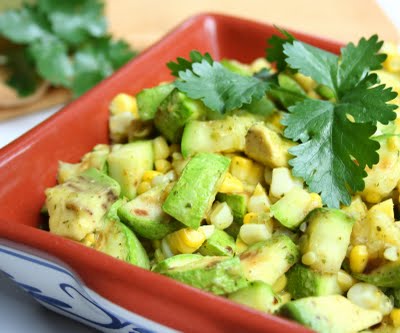 Last year, we planted some cilantro in a special garden container on our patio and it flourished…so much so that we were giving it away by the fistful. This year, I thought we’d be slightly more moderate in our cilantro-growing. But no. We planted just as much in the same container as last year, plus my husband filled several other smaller containers as well. And we have some growing wild where the seeds blew from last year. It’s a regular Cilantro Fiesta out there, I tell you. If you are in need of fresh cilantro, feel free to stop by! (The basil is going gang-busters too, if you need any of that). 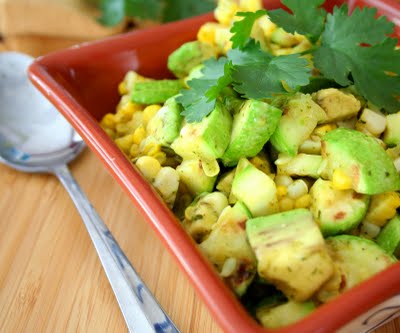 So cilantro, and finding ways to use it, is clearly on my mind. I was talking to my husband about having seen Cilantro Lime Chicken recipes, but we’d just had chicken and needed something different. The idea for the grilled zucchini and corn just came to me, and I knew it would make a perfect summer salad. I found a decent-looking recipe for a Cilantro Lime Vinaigrette at For the Love of Cooking, but I had some changes in mind, not least of which was adding some heat with chipotle powder. And then as I went and tasted, I changed it a little further. Grilled my veggies, chopped them up, and away we went. 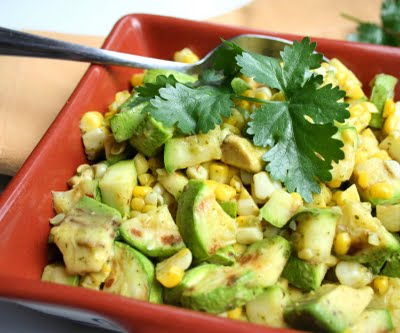 The Results: Perfect summer salad, yes indeed! Let me just say that as wonderful as all the grilled, fresh veggies are, it’s the dressing that makes the salad. For a cilantro junkie like myself, this stuff is heaven. I could have drunk the whole batch straight out of the blender, that’s how much I liked it. I think the touch of chipotle powder really rounds it out as well and gives it a southwestern kick.

I know this recipe is not very low carb with the corn in there, but it could be easily modified to up the zucchini and other low carb veggies, with just a small sprinkle of corn for flavour. Consider grilling some pretty yellow summer squash and some red pepper, along with the zucchini. Really, it’s the dressing that makes this salad phenomenal, so it almost doesn’t matter what you put under it!

Cut zucchini lengthwise into 1/2 inch thick slices and brush both sides with olive oil. Sprinkle with salt and pepper

Soak corn in its husk in large container of water for 10 minutes. Remove from water and shake off excess.

For the dressing, combine all ingredients in a blender and process until smooth and well combined. Pour dressing over vegetables and toss to combine. Refrigerate salad until chilled.

Serves 6. I won’t give you a carb count because it all depends on what veggies you put into it!