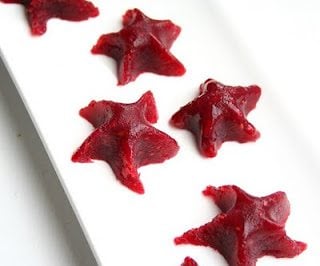 Summer is officially over. Well, not officially according to the officials who officially officiate these things. But as far as I am concerned, it is officially over. For anyone who has ever been beholden to a school year schedule, which is practically everyone, summer is over when school is back in session. And tomorrow my son heads off to Grade 1, and we become slaves to the school schedule once again. When that first school bell rings and the kids head into their classrooms, that is the start of fall. It hardly matters what the actual temperature is, or what the officials say, I will always feel like summer ends when school begins.

And with the start of school comes the start of packing lunches, one of my least favourite tasks of the day. I steadfastly refuse to purchase the school meal plans because I know I can do much better, both health and cost-wise, with home-packed lunches. But packing meals and snacks that are both healthful and flavourful is more difficult than it might seem. I have multiple children, and keeping track of each child’s likes and dislikes requires some mental dexterity. And since so many schools are nut-free, I have to be mindful of the ingredients in pre-packaged snacks. There is also the possibility that a snack that doesn’t actually contain nuts might have been made on a facility of one that does, thereby risking cross-contamination and disqualifying that snack too. 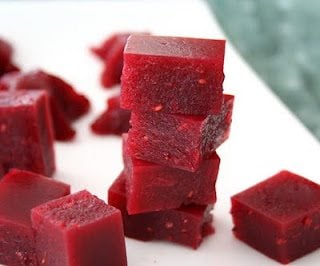 One snack that my kids love, and that I feel pretty good about giving to them, are these little gummy fruit snacks from Trader Joe’s. They’re called Fruit Flakes and are something like a cross between fruit leather and gummy bears. There are other brands on the market, but the Trader Joe’s brand does not contain any added sugar. My biggest beef with them is that there are only 6 packs to a box, and at $3.50 a box, they aren’t the most economical. So I somehow got it in my head that I should try making my own. How hard could it be?

I cast around for some idea on how to go about it, and although I didn’t come up entirely empty-handed, I didn’t really find what I was looking for. Most of the recipes I came across were made with sugar, and plenty of it, which rather defeated the purpose of my mission. The TJ’s Fruit Flakes are made simply of fruit puree and pectin, but most pectins on the market take sugar to help them jell properly. So I was a little stumped. I finally came across a parenting messageboard where someone had made gummy fruit snacks with gelatin, and as I had plenty of gelatin on hand, I decided to give that a go. It wasn’t quite what I was looking for, but I figured it would please my kids. I didn’t follow the recipe exactly, as I used some ideas and instructions from the back of the box of gelatin. I also thought I’d get a little fancy and use these cute little starfish-shaped ice molds I’d bought at Ikea a while ago, just for kicks. 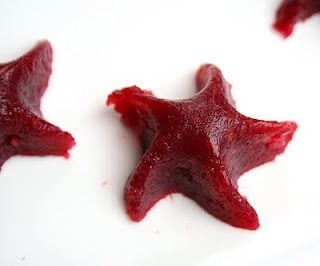 The Results: Although very good in their own way, these definitely weren’t what I was looking for. They were really much more like good-for-you Jell-o Jigglers than the fruit snacks I had in mind, and because they were made with gelatin, they had to be kept cool, lest they melt into goo. That said, they were a hit with my kids, who were perfectly happy to take them to daycamp in their cooler bags for snack time. I tasted them myself and I loved the intense berry flavour and found the jelly texture quite nice. They just weren’t what I’d originally had in mind.

The ones in the starfish molds were a big ol’ pain in the you-know-what to get out in one piece. It may be that the mold is really meant for ice cubes, but I thought they’d just pop right out. When they didn’t, I tried sitting the mold in warm water for 30 seconds, but they just became gooey so I had to refrigerate them again. I know the folks who make jelly shots and such must have good tricks up their sleeves, but I certainly don’t know how to do it. In the end, I had a much easier time with the ones I just poured into a pan and cut into little blocks. You could also try cutting them into shapes after they’ve jelled.

Since making these, I’ve thought a lot about how to make them more like the Trader Joe’s fruit snacks. I think in the end, I would actually use some pectin, and try drying the mixture in the oven for a while, to get that cross between fruit leather and gummies. I may give that a go someday and if I am successful, I will let you know. In the meantime, if you are looking for a healthy, fun snack for you kids, these ought to fit the bill! 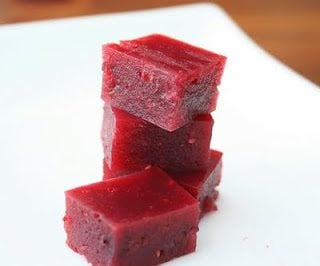 In a small saucepan over medium heat, combine the berries and water. Bring to a boil and cook until berries are soft, about 5 minutes. Transfer to a blender or use an immersion blender to puree berries until smooth. Return to pot. Add applesauce and return to a boil, then remove from heat, cover and set aside.

In a large bowl, sprinkle gelatin over fruit juice and let stand one minute. Add hot fruit mixture and stir until gelatin completely dissolves, 3 to 5 minutes.

Pour into 8 x 8 inch glass or ceramic baking dish (or into molds, if you want to go that route). Refrigerate until firm, about 3 hours. Cut into blocks or shapes.