Healthy keto energy bites that taste just like your favorite brownies! So easy to make and filled with healthy fats from ghee and cocoa butter. These paleo friendly fat bombs are always a hit and they store and travel really well. Perfect for keto meal planning. 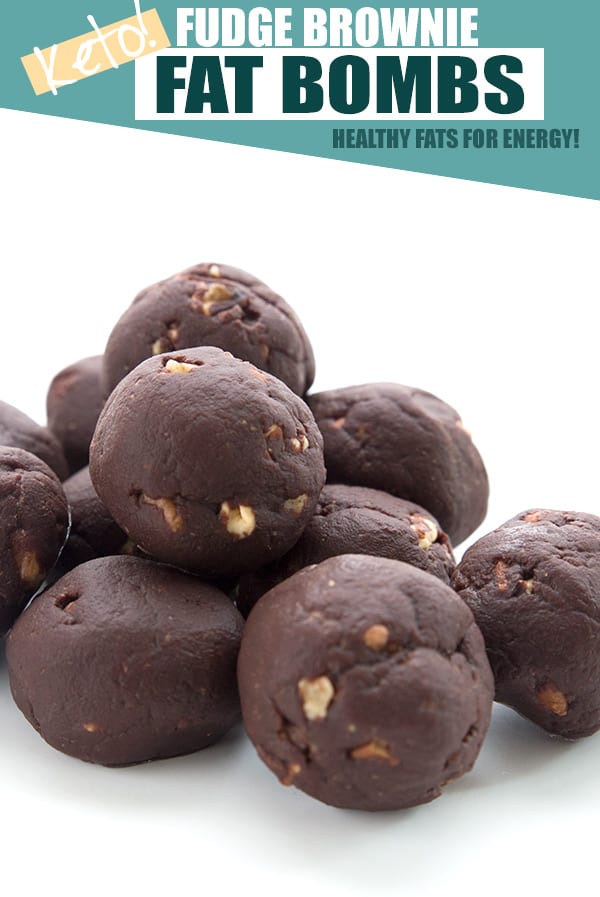 I first made these brownie fat bombs for a Facebook live video almost a year ago. It was one of those last minute recipes that I threw together one day and it worked so remarkably well, they became an instant success. I decided I had to give these tasty energy bites their very own recipe.

I have several other delicious fat bomb recipes, and all of them are easy to make. If you want something a little different, try the Peanut Butter and Jam Cups. The Raspberry Coconut Bark is also delicious. And both are dairy-free!

Technically, these brownie fat bombs are not dairy free as they contain ghee, which is a form of clarified butter. But it is considered paleo and almost dairy-free, as it has no lactose in it and is appropriate for those who have any kind of dairy intolerance. 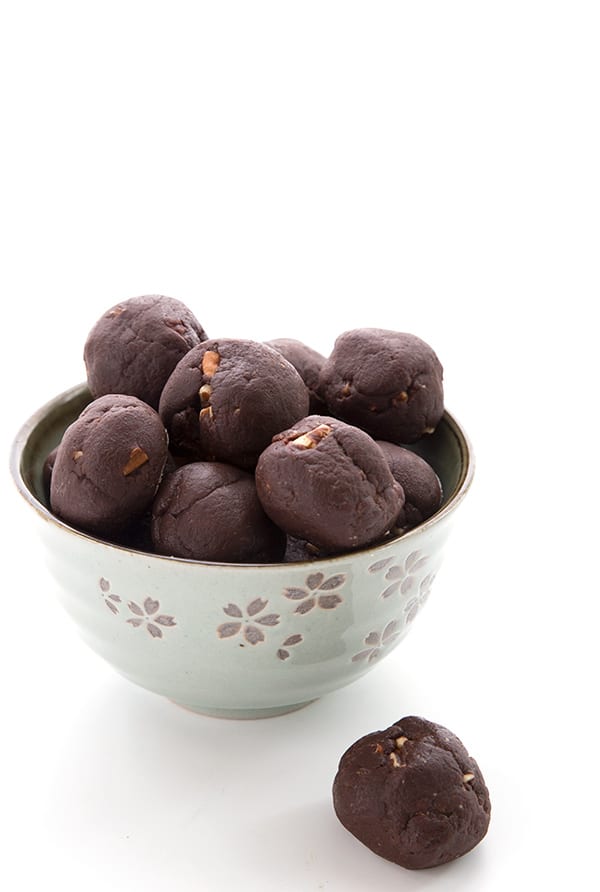 Do you need fat bombs on a keto diet?

Fat bombs can be a bit of a controversial issue in the keto world. Why is that?

Well, on the one hand, they are a great way to snack without blowing your carb count for the day. But on the other, people come to rely on them too much and eat too much fat, which can stall weight loss.

Yes, you can eat too much fat on a ketogenic diet. When keto was first gaining in popularity, the thought was that fat was an unlimited macronutrient and you could eat as much as you wanted. As long as your protein and carbs were within the target range, you could, in essence, gorge yourself on fat.

It quickly became apparent that this isn’t true. It may seem true at the beginning, for those folks with a great deal of weight to lose. But many people find that the closer they are to their target weight, the more too much fat can impede the process.

And for anyone who follows a keto diet for other health issues and has no weight to lose, too much fat can actually cause weight gain. So you can see why fat bombs have become a bit contentious.

That said, I think there is merit behind the concept, and used appropriately, fat bombs can be a great energy snack that helps you stick to your macros. I find that when I am on the go or traveling a lot, having an easy energy bite like these brownie fat bombs can ward off temptation and keep me on track.

The verdict? No, you don’t NEED fat bombs on a keto diet, but they can also be incredibly helpful. Just don’t overdo them and don’t rely on them too much. 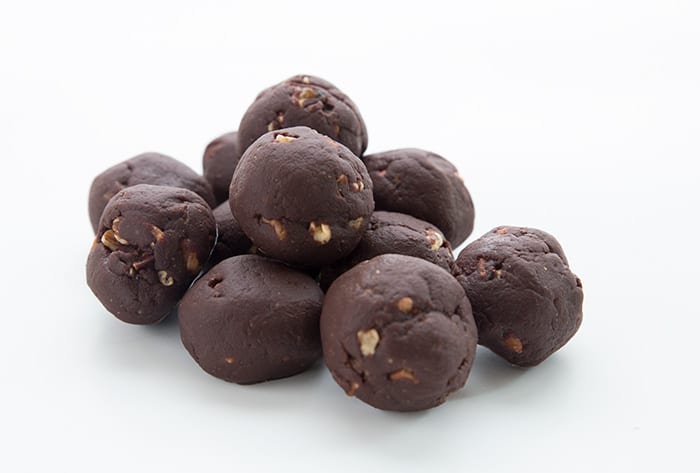 These rich fudgy chocolate fat bombs are essentially flourless no bake brownies. And they are full of healthy fats from both the ghee and the cocoa butter. Coming in at less than 5g total carbs and 17g of fat per serving, they really are an ideal keto snack.

The trick to making these healthy energy bites is to force your chocolate mixture to seize. Normally, seized chocolate is a bad thing and you have to throw the whole mess away. But in this case, it helps give the fat bombs structure so you can roll them into balls.

Cocoa butter is prone to seizing when it comes into contact with any moisture. So the cocoa butter is critical to the success of this recipe. I purchase my cocoa butter on Amazon, although I have now started to see it in my local Whole Foods. I like the Terra Soul cocoa butter, as well as the one from Wild Foods.

I also use raw cacao powder here instead of cocoa powder because it too is more prone to seizing. The Thrive Market brand of raw cacao is perfect for these brownie fat bombs.

If, by chance, your mixture doesn’t seize properly, you can add a few tablespoons of a keto flour like coconut flour or almond flour to give it the right consistency. For coconut flour, you’d probably only need about 2 tablespoons. Almond flour would be more like 1/3 cup. (Obviously this will raise the carb count a little).

In the end, you want a mixture that you can roll easily into balls without having to refrigerate it first. Your hands will be greasy but the mixture shouldn’t stick to them. 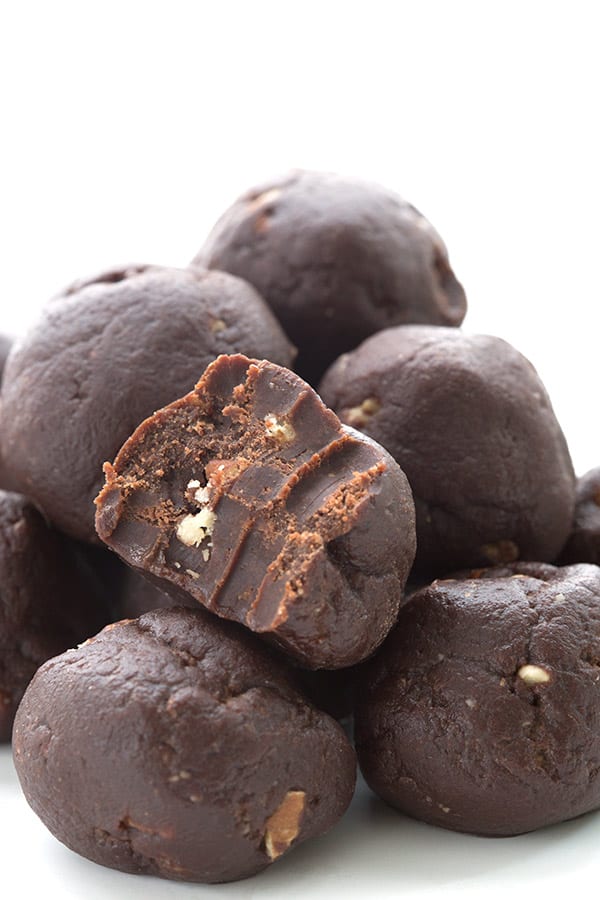 The fabulous thing about these chocolate fat bombs is that they don’t require any refrigeration at all and can be stored for use to a week. Which means they are great for meal planning and they travel well too. I even took them with me all the way to Australia last summer!

The trick is the fats you use. Unlike butter, ghee is stable at room temperature for months. And while nut butter can go rancid eventually, it’s fine at room temp for a week or two.

Cocoa butter is completely solid at room temperature, which gives the energy bites some solidity and structure. They will be soft like a brownie, but they won’t goo all over the place or melt in your hands.

Store them in a covered container and they can go with you anywhere. If you do want to keep them longer than a week, the fridge is your best option. They should keep for up to a month that way. 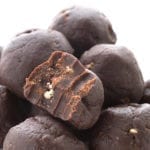 Healthy keto energy bites that taste just like your favorite brownies! So easy to make and filled with healthy fats from ghee and cocoa butter. 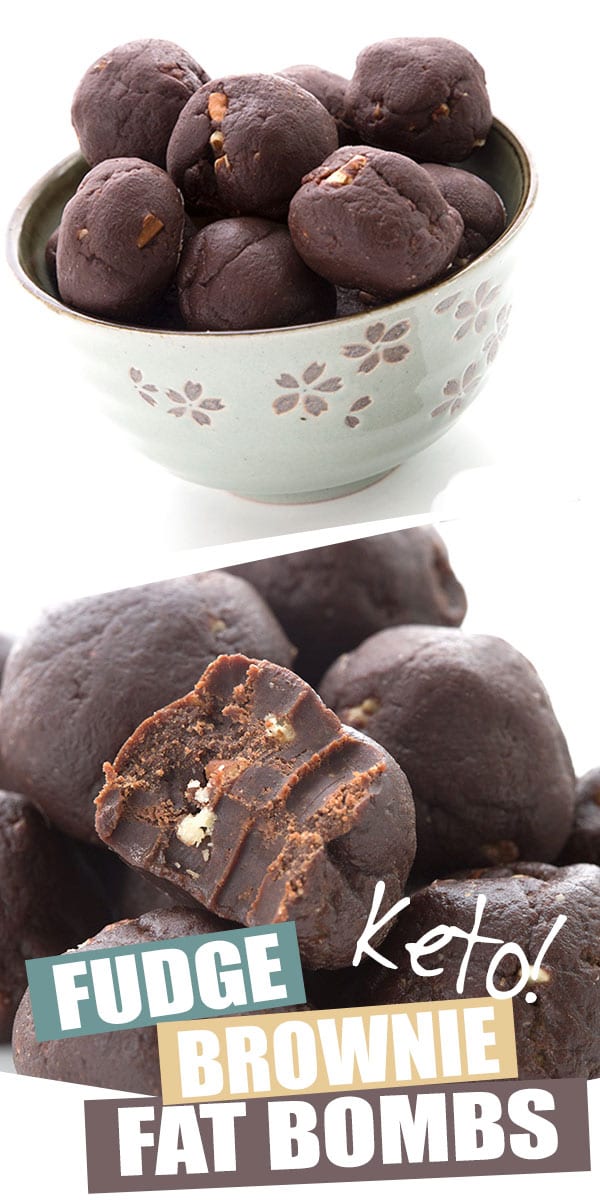 Leave a Reply to Erica B Cancel reply