Keto bread recipes don’t get much better than this cheesy skillet bread, with its wonderfully crisp crust of cheddar cheese. This gluten-free skillet bread is perfect to serve with soups and stews, and makes the BEST low carb Thanksgiving stuffing! Check out my new how-to video. 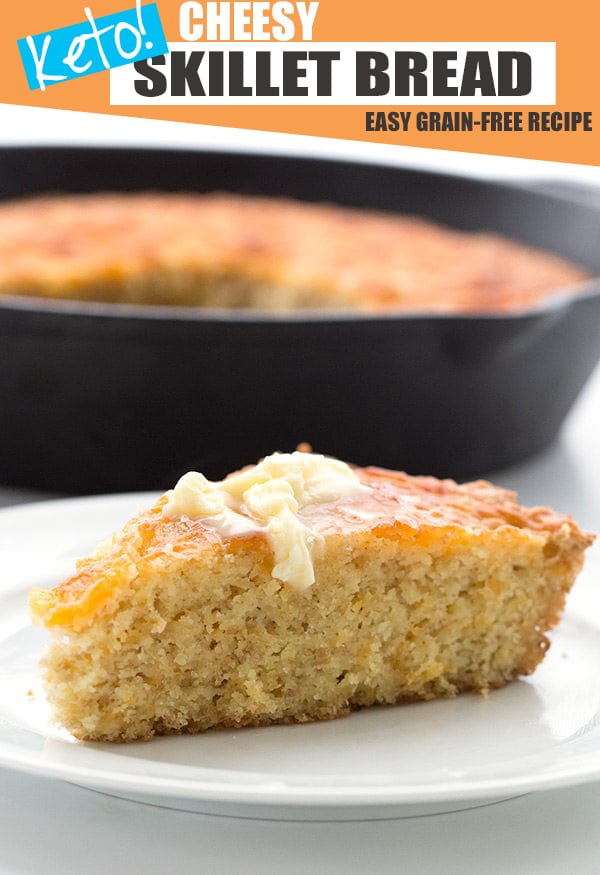 This tender skillet bread might just be my favorite keto bread recipe. And it’s not just me! It’s a fan favorite and goes with everything! Try it with some Keto Soups and Stews for the perfect comfort food.

I approach skillet recipes that are baked in the oven with some trepidation, because it’s almost inevitable that someone will try to pick up the hot skillet with their bare hands. I remember in vivid detail my husband wrapping his hand around the handle of skillet I had removed from the oven only a few minutes before.

It was one of those slow motion moments, where I could see him reaching for it and I couldn’t get the words out of my mouth fast enough to stop him. The single syllable “No” never seemed like such an intricate word in that millisecond of time, as my tongue and mouth tried to form it in advance of the huge mistake he was about to make.

I didn’t manage it and he burned the palm of his hand quite badly. It blistered mightily and was painful for days. That was over 10 years ago and I have the whole scenario imprinted on my brain.  I’ve now learned to leave the oven mitt ON the handle of the skillet once it’s removed from the oven, if only as warning to the unsuspecting soul who is simply trying to help get dinner on the table.

Third degree burns aside, this cheesy skillet bread is my new go-to low carb quick bread recipe. It’s savoury, easy to make and every single member of my family loves it.  The inspiration  for this keto bread recipe started with one for skillet cornbread that I used to make on occasion.

Cornbread may be gluten-free, but it is not even remotely low carb, and I was wondering if I could come up with a savoury skillet bread that would bake up in a similar fashion. It was pure gut feeling on this one, trying to get a consistency that I thought would work. I was actually worried that if I made it too moist, I would end up with a center that wouldn’t cook through. 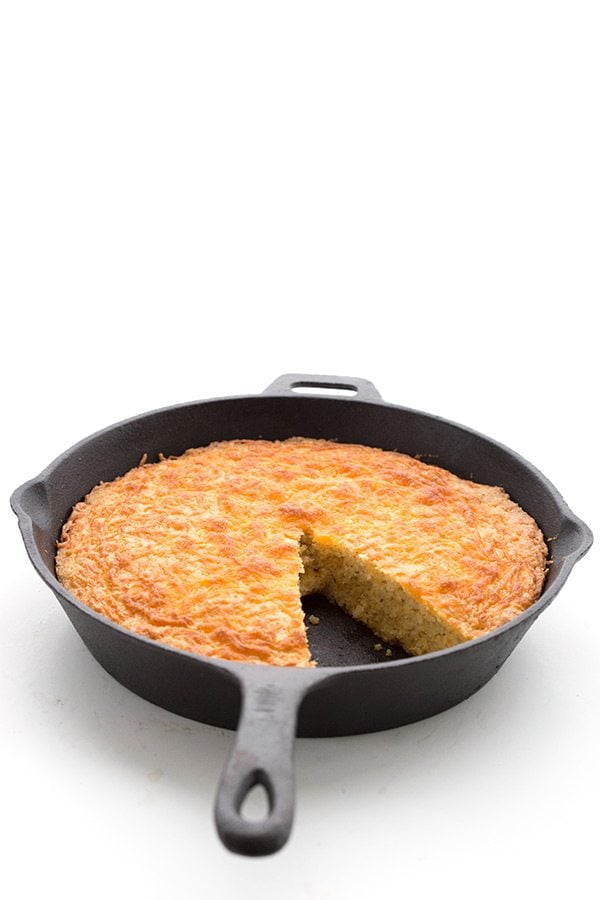 Thankfully, my fears were groundless. The keto bread recipe worked! The skillet bread baked up beautifully, and pouring the batter into a hot buttered skillet meant that it had a crispy browned crust.

It was a perfect accompaniment to soup for dinner. I actually wasn’t going to post it right away but it suddenly occurred to me that it’s a perfect Thanksgiving side dish, and as I haven’t really put up many Thanksgiving recipes this year, it was time to make amends. So I made it a second time to get photos and it paired it with my low carb fish chowder.  And I am already planning to make it again on Christmas Eve. 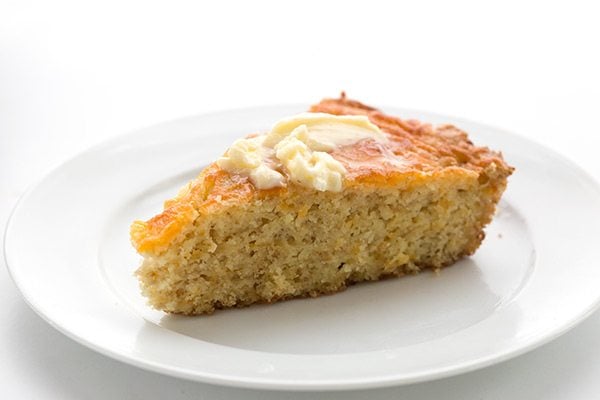 I have turned this easy keto bread recipe into Thanksgiving stuffing numerous times and it always gets rave reviews. The trick is to dry the bread out very well in your oven the day before. Then proceed with the usual stuffing ingredients and bake. I really like to turn it into this low carb Spicy Cheddar and Sausage Stuffing.

Many people have made this same recipe and loved it. One reader showed me photos from her Thanksgiving dinner which included my low carb stuffing as well as a conventional one. The only one that was all gone was mine! 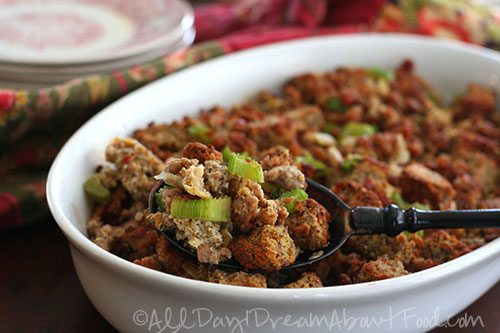 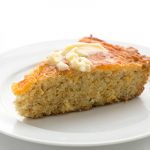 Easy low carb skillet bread with a wonderful crust of cheddar cheese. This keto bread recipe is perfect with soups and stews, and makes the BEST low carb Thanksgiving stuffing! 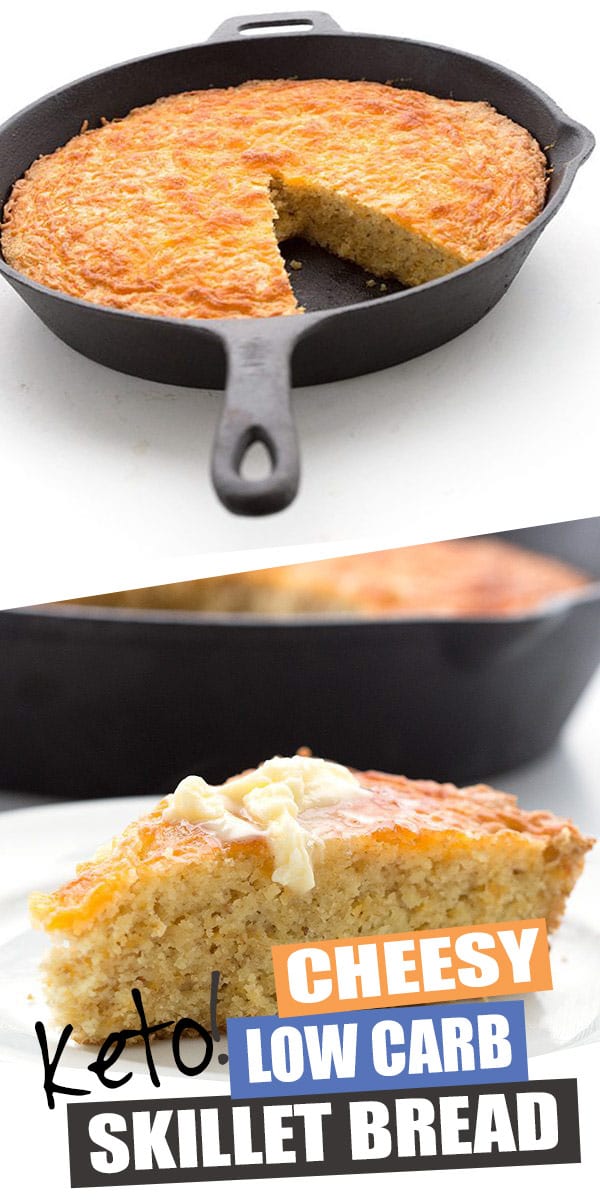