This keto pizza recipe will quickly become a family favorite. All the great flavors of a jalapeño popper in a low carb, gluten-free pizza! Jalapeño, bacon and cream cheese on top of a fathead pizza crust. Many thanks to al fresco® for partnering with me to bring you the best low carb recipes. 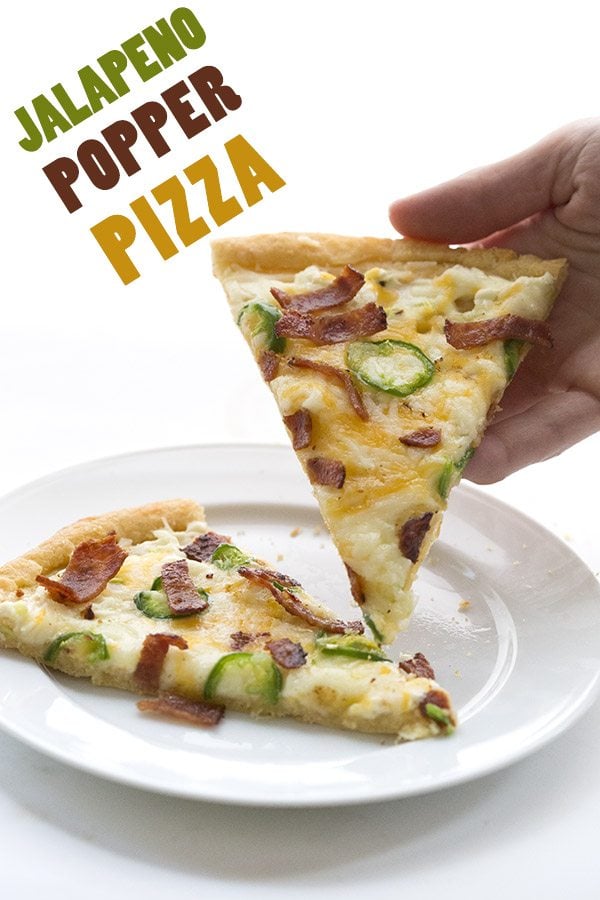 You’re not going to believe that this keto pizza recipe is made with chicken bacon!

Sometimes, there’s no getting around it, you’ve just got to eat crow. You have your mind all made up, you think you know exactly what you’re talking about, you’re absolutely certain that you know the truth of the matter. And you are very vocal about it too, making your opinion known in no uncertain terms. You brook no opposition, you are very set in your ways. And then you find out that you were, in fact, wrong. Yep, that’s a big ol’ plate of crow sitting in front of you and you’ve got to eat the whole thing. 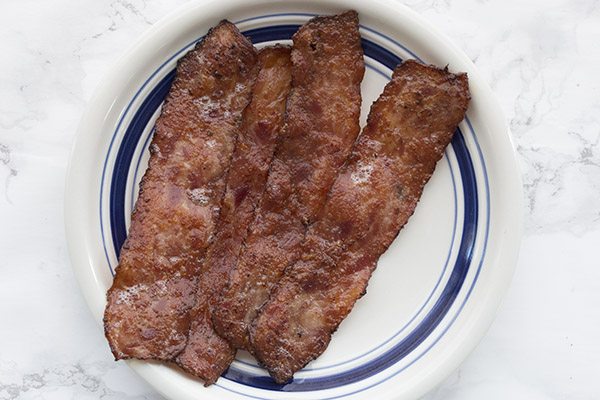 That was me with the bacon on this keto jalapeño popper pizza. Chicken bacon! Can you believe it? I couldn’t believe it until I tried it with my own tongue. Although, in retrospect, I can see that it’s not all that crazy an concept. There’s beef bacon and lamb bacon, so why am I so surprised that there’s chicken bacon?

I suppose I am not really surprised that it exists, but more surprised that it’s really very good. I think I was automatically assuming it would be like the turkey bacon I’ve had in the past, that flaccid, flavourless stuff that tries to convince you it’s the healthier choice. Which we know isn’t really healthier at all and certainly no where near as good as pork bacon. 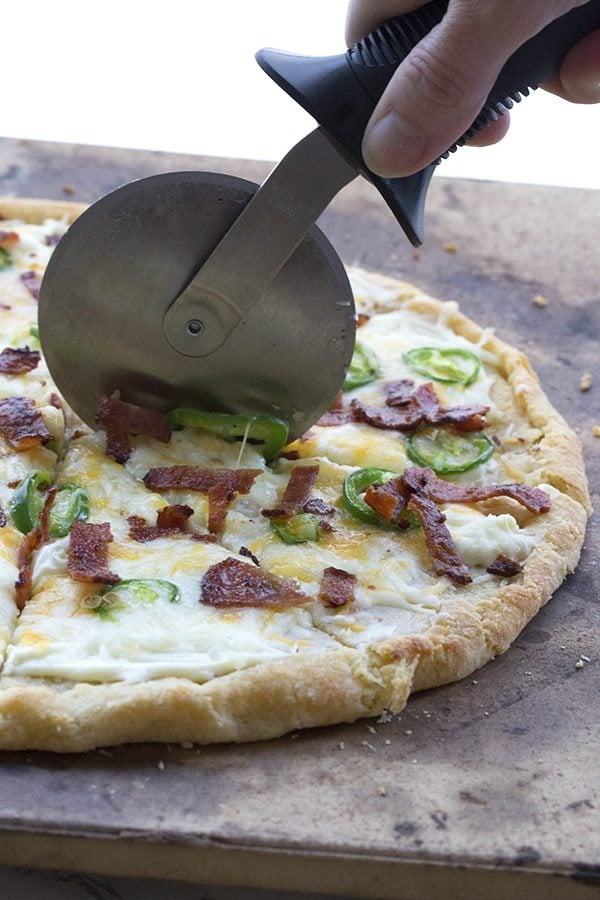 But this chicken bacon stuff is, as I said, very good and bears little resemblance to the turkey bacon I used to know. When the folks at al fresco® asked me to test it out, I was hesitant and skeptical and I said as much. But the reviews on their website were all favourable and I thought…what the heck, why not? I could sense that I was being a bit close-minded, a bit of a bacon snob, so I thought I should expand my horizons. I also knew that everything al fresco® does, they do very well. We love their chicken sausages  and gluten-free meatballs. 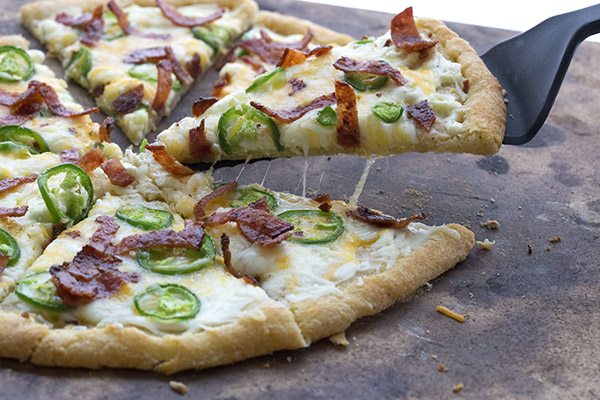 So of course they do bacon well, too. It’s uncured, it smells like real bacon, it cooks like real bacon and it tastes like real bacon. Honestly, if someone plunked it down in front of me and didn’t tell me it wasn’t pork, I wouldn’t have a clue. I cooked some up for this keto pizza and it barely made it into the recipe, as I kept nibbling on it. I am impressed. It doesn’t mean I am going to stop eating regular bacon, of course, but for anyone who can’t eat pork, due to religious or health reasons, this is absolutely a wonderful replacement. It’s delicious and I will happily use it again. 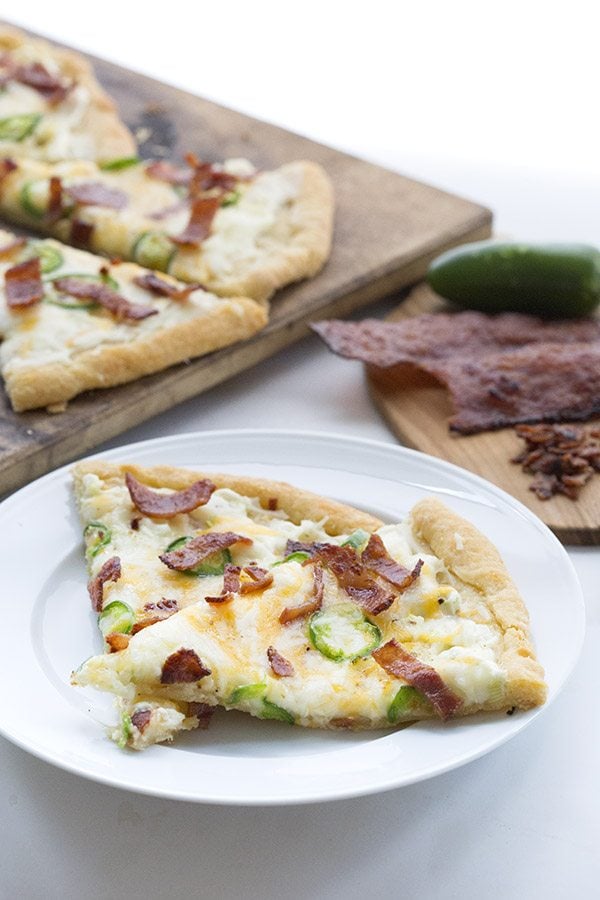 And as for the pizza, my husband actually declared it some of the best pizz he’s ever had, low carb or otherwise. And trust me, this man knows his pizza. Now to eat that big plate of crow… 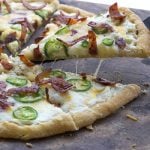 This keto pizza recipe will quickly become a family favorite. All the great flavors of a jalapeño popper in a low carb, gluten-free pizza! 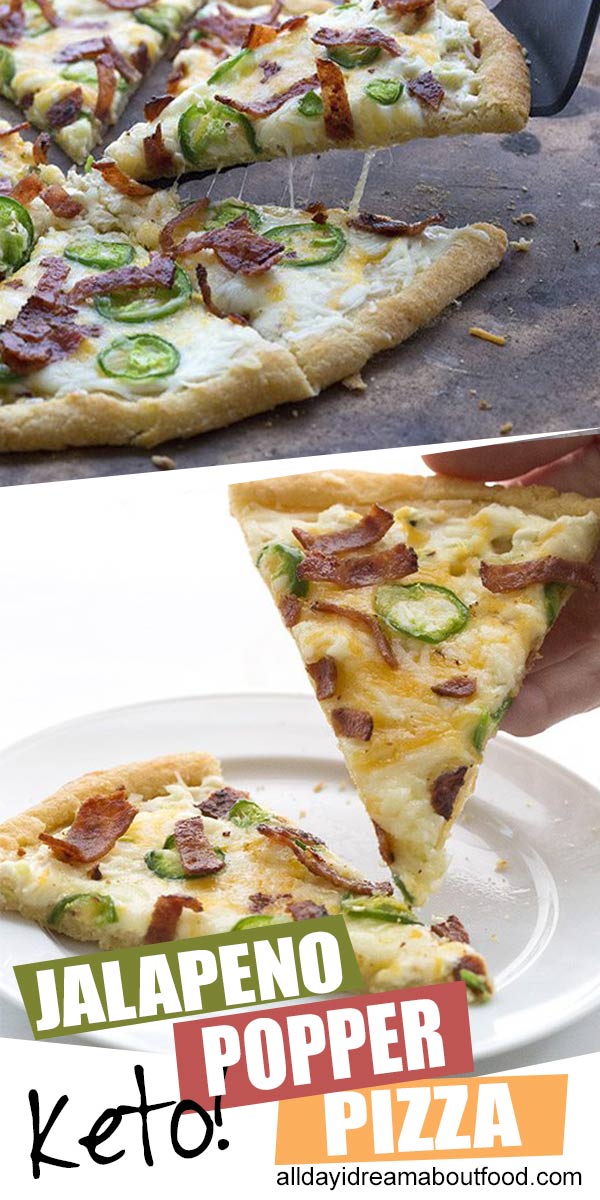 Many thanks to al fresco® for partnering with me to bring you great low carb recipes.