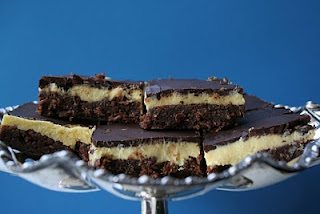 There are very few foods that can truly be considered uniquely Canadian cuisine. I can literally count them on one hand. Poutine, that rather revolting dish of french fries smothered in gravy and cheese curds. Tortiere, a delicious ground meat pie usually served at Christmas. Butter tarts, which are essentially like pecan tarts, but with currants in the place of pecans. And then there are Nanaimo Bars. How do I describe these sweet bars, with the yellow buttercream sandwiched between layers of chocolate? For lack of good adjectives, I refer you to the Wikipedia entry on Nanaimo Bars. The fact that they have their own Wikipedia entry, with a whole history of their origins, should tell you something about the popularity of these delicious treats!

When I was little, Nanaimo Bars were my favourite dessert. I remember my aunt taking me to Just Desserts, a restaurant that only served desserts and coffee. The glass cases held rows upon rows of beautiful cakes and tarts, each more decadent than the last. But I eschewed these fancy confections and went straight for the simplicity of the Nanaimo bar. One bite and I was hooked. A crumbly chocolate crust, a thick sweet center, and a layer of chocolate ganache…what’s not to love?

The fact that they are a no-bake bar makes them an ideal treat for summertime. With Canada Day just around the corner (July 1st), I thought I should take a stab at making a low carb version. I wouldn’t want any diabetic Canucks thinking that they had to go without dessert on our national holiday! I may be the only person in the state of Massachusetts actually celebrating the day, but I will toast my countrymen/countrywomen with a low carb Nanaimo Bar and a tilt of my head towards the north. Given our low key national pride, that’s about all anyone does to celebrate as it is!

The Results: Okay, not to toot my own horn here but I NAILED this recipe! I would say, in all my low carb experimentation, that these are the closest to the real thing I have accomplished. They are almost identical in both taste and texture. They are a little less sweet, which is actually okay by me as conventional Nanaimo Bars are really rich. And to my delight, I found the crust to be a little less crumbly and messy than the original. It holds together so well, I don’t end up with a lot of chocolate crumbs at the bottom of the pan. Which means MORE of the crust in my mouth!!!

Just a note…I wasn’t sure if I could call these gluten free as well. The sugar-free pudding mix has lots of fakey-fake things in it (only for Nanaimo bars could I stoop so low!) and I don’t have full confidence that there isn’t a little gluten in there somewhere.

Chocolate ganache:
4 oz unsweetened chocolate
1 tbsp butter
15-20 drops stevia extract, depending on how sweet you like it.

For the crust, melt butter in a medium saucepan over low heat. Stir in cocoa and erythritol and then slowly whisk in beaten egg. Cook, stirring constantly, until mixture thickens. Remove from heat and stir in vanilla, almond meal, flax meal, coconut and nuts. Press crust into prepared pan evenly and refrigerate until firm (30-45 minutes).

In a medium bowl, beat softened cream cheese until smooth. Add cream, pudding powder and vanilla and beat until combined. Spread over crust and refrigerate for at least half an hour.

In a small saucepan over low, melt butter and unsweetened chocolate together. Add stevia extract and stir until combined. Pour over prepared bars and spread with a knife or offset spatula. Refrigerate until firm (1+ hours). Cut into 25 squares.

Serves 25. Each square has 7.4g total carbs, 5.5g carbs if you subtract erythritol.