156shares
There are more and more low carb products hitting the market these days. The question is…are they any good? Read on to find out! 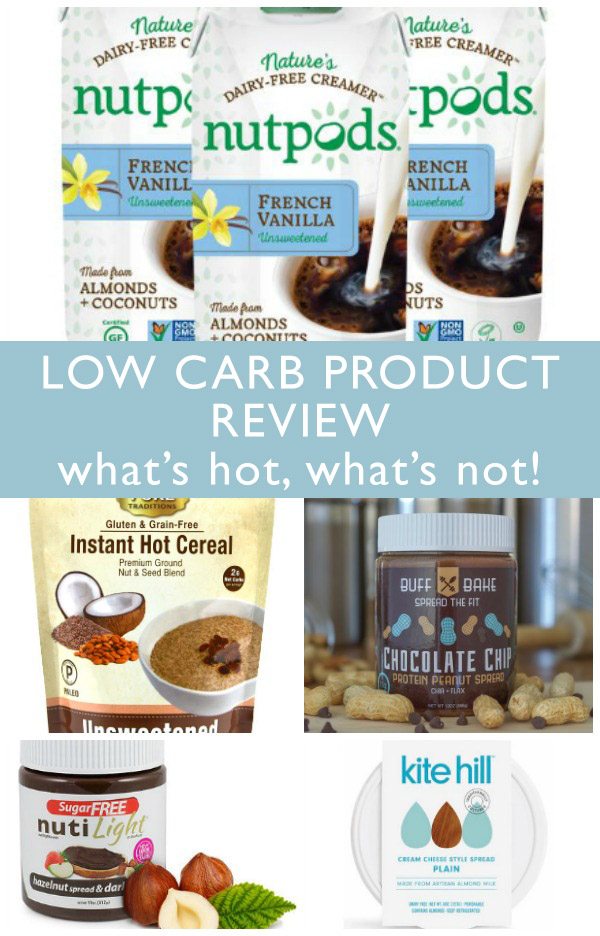 I have a bit of an obsession with grocery stores. I mean, as a food blogger, I frequent them…frequently. More than frequently. Sometimes every day. On occasion, when I’ve forgotten some important ingredient, I’ve gone twice a day. And when I am visiting a new place, I love checking out the grocery stores in the area, seeing what they carry and how it’s all displayed. Even grocery chains have different selections in different areas, so I will poke in and wander about, picking things up, putting them down again, and usually coming home with a few fun finds.
My poking about like this does have a purpose, however. Whenever I find healthy low carb products, I snap them up and bring them home. And then I test them out on myself and my family to see what we like and what we don’t. I get sent quite a few products too (especially now that I am signed up for Keto Krate), and I’ve been keeping notes. I consider it part of my job to be in the know about the latest low carb trends, and to tell you what’s good and what’s not. It’s a real hardship, you know, to taste test so many things…

If you love to test out the latest low carb snacks and treats, you may want to sign up for the Keto Krate subscription box. It’s a fun way to test drive some of these products in small quantities first. Please be aware that this post contains links to some of my affiliate accounts. Thanks for your support!

Not Ketchup: In the interest of full disclosure, let me tell you first that this is a product created by a fellow blogger and friend. And of course, I want to support her efforts. That said, if it was something I didn’t like, I would quietly put it to the side and never mention it again. But it is good and so much more interesting than store-bought tomato ketchup. At this time, the only flavour that is sugar-free is the Tangerine Hatch Chile but I do know she’s planning on attempting to make the other flavours without sugar as well. It’s great as a burger topping, a marinade, or a dipping sauce. My youngest (and pickiest!) loves it so that tells you something!

It is available in some grocery stores such as Whole Foods but it’s probably easiest to get on Amazon at this point. Not Ketchup on Amazon.

Epic Bacon Bites: I wanted to like these, I really did. I mean, it’s really just uncured bacon and has zero carbs, what’s not to love? I saw them at a Whole Foods when I was at a conference in Chicago and thought they’d be perfect for me. But I didn’t really like them at all. The trouble was the consistency, I think. Instead of being dry and chewy like jerky or crispy like bacon, these were…moist. Ugh, isn’t that an awful word? They had decent flavour but an off-putting mouthfeel. At least for me. I think it’s a matter of taste so who knows…you might like them! 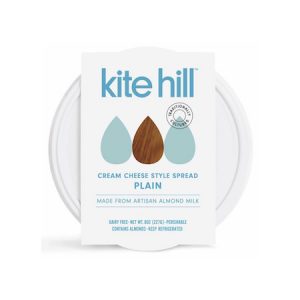 Kite Hill Cream Cheese: Now this stuff I like! A big thumbs up for this dairy-free almond milk cream cheese product. I’ve tried a couple of dairy-free cream cheesee substitutes before and been less than impressed (and often concerned about the fairly high carb count). One was so awful, I had to wash my mouth out to get rid of the weird plasticky taste. So when I spotted this at Whole Foods, I tried it with trepidation. I was happy to see the low carb count per serving (only 2g, compared to the 5g in Daiya) and I was utterly impressed with the flavour too. The chive cream cheese is awesome but the plain cream cheese is great too, with no funny aftertaste. I am even featuring it in an upcoming recipe!
Kite Hill makes a number of other products, including some fresh cheeses and ricotta which I have yet to try. I did try their plain almond milk yogurt and sadly, I was not a huge fan. It lacked the tanginess required for yogurt, and it just didn’t really do it for me.

Nutpods: Another dairy-free product for the win! I saw an ad for these on Facebook and being a sucker for new products, I clicked through. I am not dairy-free but I do have a sister who is lactose intolerant and who was coming to visit, so I added some to my Amazon shopping cart. I was delighted to see that they don’t contain any soy, carrageenan, gluten and are completely unsweetened. And they actually taste pretty good, too! At zero carbs per tablespoon, they are a delicious dairy-free way to lighten your coffee and give it a little flavour. I tried the French Vanilla. Oh, and it froths nicely too for dairy-free lattes and cappuccinos.

On The Go Paleo Hot Cereal: This was an impulse purchase at New Seasons one day and it was a very good impulsive buy. Although it’s pretty easy to make your own low carb hot cereal mixes, sometimes it’s nice to have other people do the work for you. It was tasty and my two girls were big fans, asking for it quite a lot. It was especially delicious with a few sugar-free chocolate chips melted in there! It’s now been renamed under the brand Pure Traditions.

Steaz Iced Green Tea: Summer is coming (okay, summer is HERE!) and you need to stay hydrated. When you’re sick of the taste of water, these Steaz green tea drinks make a delightfully refreshing change. I’ve tried the raspberry and the half & half (half lemonade, half green tea). Make sure you go for the ZERO kinds, as the others do have a little sugar. I am planning on getting the Peach Mango flavour next! They are sweetened with erythritol

Ayoba Yo Biltong: It wouldn’t be a proper low carb product review without some jerky, would it? I received a package of this in one of my Keto Krates and I was a little leery, having had some awful Biltong from Trader Joe’s (biltong is a traditional South African style jerky). But this stuff is really good, as are their meat sticks. I gave them a thumbs up in a video review of my box and they kindly sent me a whole bunch more just for the shout out. It’s quickly becoming one of my favourite snacks.

Buff Bake Peanut Butter: Jury is out for me on this one. They are…okay. The chocolate chip one really didn’t do it for me but the white chocolate was tastier. I found they had a bit of a strange mouthfeel, sort of pasty, which might be the added protein powder. The good thing is that besides the jars, they also come in little travel size packs you can take with you. Do know that they do contain a little sugar, but still only come in at 3 g net carbs per serving.

So here we have two sugar-free Nutella copycats. I’ve tried both and they are both good, but I think that in a blind taste test, NutiLight would be the clear winner. It’s smoother, more chocolatey and less overtly sweet. And it’s less expensive, which is a big bonus. On the plus side for Go-Lo, their product is made with sustainable palm oil and they sell the little on-the-go packets. But the reality is that while these are both great products, it’s so ridiculously easy to make your own sugar-free Chocolate Hazelnut Spread, it’s much more cost effective, and you can add whatever natural/sustainable oils you want, you should really do that most of the time!

So there you have it, friends. I have more products I’d like to review but I don’t want this to get too long winded. Until next time!