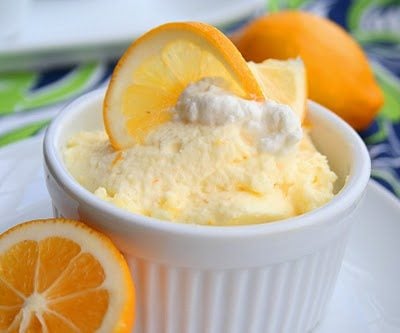 I’m in love. I didn’t mean to fall in love, I swear I didn’t, but it just happened. It took me by surprise. Fortunately for me, there is room in my life for both my husband and my new love. Because my new love is a food item…Meyer Lemons. I had heard of this lovely citrus fruit long before I ever saw one up close and personal. I first heard of them from my father-in-law a few years ago, and since then I’ve seen them making the rounds all over the foodblogging world. Those bloggers lucky enough to live in California seemed to have more of them than they knew what to do with. But my local grocery store up here isn’t exactly known for carrying the more exotic or interesting gourmet items, so I was surprised to see them a few weeks ago. I bought a bag and practically ran home to try them out.

Meyer lemons are smaller than conventional lemons, they are more orange in colour, and they aren’t quite as tart. The minute I cut into one, I could smell the difference – to me, it seemed to have an almost spicy aroma. I made Meyer Lemon curd with some of them, which was wonderful, and I wanted to find another dessert that would showcase their unique flavour. I also wanted to try working with gelatin. Beyond the occasional box of Jell-O, which I don’t much like, I’ve never made anything with gelatin in it. I’d long had my eye on a recipe for Lemon Mousse in How To Cook Everything by Mark Bittman, so it seemed like the perfect match for my Meyer Lemons.

I did modify the recipe a little bit. To make it low carb, I obviously had to forego the sugar in favour of a low carb sweetener. And I only had three eggs in the house, so I decided to attempt it with one less egg than his recipe called for. I don’t think either of these changes made much difference to the end result, but I do have one little issue which is purely cosmetic. I originally wanted to chill and set the mousse in individual servings but the instructions said to stir the mixture occasionally while it chilled, so I decided to leave it one big bowl. However, the mousse set very quickly and stirring it was not really an option. Dishing it out into a pretty serving for pictures was not an easy feat and after I’d played with it a while, trying it in different bowls and cups, it bore a strong resemblance to scrambled eggs. I would have been better off dishing it out at the beginning and letting it set in ramekins or dessert cups. 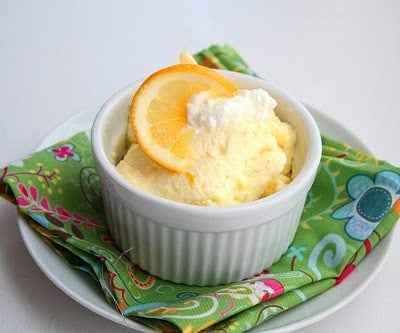 The Results: But the flavour, oh the flavour was wonderful – tart and lemony, but with a Meyer Lemon sweetness. And the texture was incredibly creamy and rich, despite it’s not-as-photogenic-as-I-had-hoped appearance. I am thoroughly infatuated with Meyer Lemons and their unique flavour and I think this mousse is a dessert worth making. Just be forewarned that it sets quickly and if you want to show off with an elegant dessert, you will want to divide it up before you let chill it. Whether or not you plan on taking photos of it, it will be much prettier served in individual-sized cups! 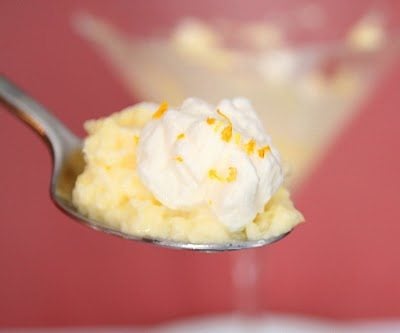 In a small saucepan, sprinkle gelatin over lemon juice and let sit.

Meanwhile, beat eggs, lemon zest, and erythritol in a large bowl until frothy. In another, medium bowl, beat cream with stevia until it holds stiff peaks.

Warm the gelatin mixture over low heat, stirring continuously, until the gelatin dissolves, about 2 minutes. Cool for 1 minute, then stir into egg mixture.

Stir whipped cream thoroughly into egg/gelatin mixture. Divide into 6 small ramekins or dessert cups and refrigerate until well chilled, about 1 hour. Garnish with extra whipped cream and slices of Meyer Lemon or zest.

Makes 6 servings. Each serving has a total of 11.16g of carbs, but only 3.16g if you subtract erythritol.