I don’t normally post a product review without a recipe to accompany it, but today I am going to make an exception. I think this product is good enough to warrant a stand-alone review, I really do. Plus I actually ate all of the product before I could bake anything with it, so that makes it kind of hard to post a recipe! 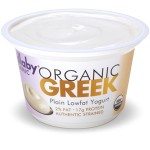 In case you haven’t noticed, I am a Greek yogurt devotee and I have been for quite some time. I had heard of it and even tried it a few times back in the day, but it wasn’t until I was diagnosed with gestational diabetes that I realized just what an amazing food it really is. Much higher in protein and lower in carbs than regular yogurt, it made the perfect snack for a hungry pregnant woman and I came to love the plain yogurt with a few berries and nuts sprinkled in. And once I realized that my blood sugar issues weren’t going to resolve themselves, I made a point of keeping Greek yogurt in my refrigerator at all times.

So you can see why I jumped at the chance to try the new Wallaby Organic Greek Yogurt. I’ve seen their products before, but have had to pass them over because they were regular yogurt and too carby for me. They sent a variety pack and I instantly claimed the plain as mine, and allowed my husband and kids to eat the flavoured varieties. And I am going to tell you right now that all varieties were a hit. This is really good Greek yogurt. I added a few chopped strawberries to mine, but I am being very honest when I say I could have eaten the plain yogurt without any sort of accompaniment at all. It was incredibly rich and creamy and I was impressed from the first bite.

It didn’t take me long to discover why I liked it so much. A quick look at the package and I saw that this is “Low-Fat” yogurt, not “Non-Fat” yogurt. And you know what? That is a VERY good thing and I know all the low-carbers out there will agree with me. Once again, I am going to say that fat is not the enemy in our diet. It’s a way of thinking that took me a while to accept, but it is very true. We would all do better with more fat (yes, even saturated!) and less carbs in our diet. I won’t proselytize here, but I do believe that eventually, conventional nutritional advice will catch up with this idea. Fat adds flavour and helps us feel satisfied by our foods, so that we aren’t reaching for another snack an hour later. So I say more power to Wallaby Organic Greek Yogurt for keeping some of the fat in their product to create a rich, creamy, satisfying treat.

I will definitely be on the lookout for this product in stores in the near future. If you like Greek yogurt, I can give this one my full recommendation.

*Disclosure: I received free samples of Wallaby Organic Greek Yogurt to try. However, all opinions are 100% mine and not influenced by this sponsorship.