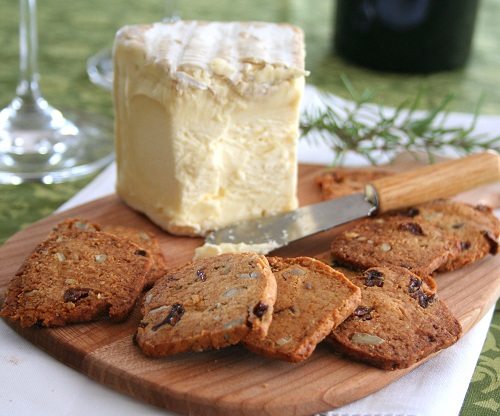 I have an intense love for all things Trader Joe’s.  I distinctly remember my first Trader Joe’s experience, out in Tempe, Arizona when I was a grad student.  After hearing much about this mecca of interesting, gourmet and relatively inexpensive foods, I finally coaxed a friend to take me along on her next Trader Joe’s run (she had a car, I did not).  Honestly, it was like walking into heaven.  I do believe I heard angels sing a little as I crossed the threshold.  But at the same time, I was completely and utterly overwhelmed.  There was so much to look at, so much to consider, so many wonderful smells and and tastes.  And all at such reasonable prices!  It was a tightwad foodie’s dream come true!  I could get lost in there for hours upon hours.  I still can.  I often feel the pull of the siren’s call, the lovely cheeses and meats, crackers and sweets, calling to me.  I can’t eat everything on offer anymore, but I’m always intrigued by their flavour combinations and sometimes I have to find a way to make my own version.  Hence, these delicious low carb Raisin Rosemary Crisps.  Delicious little rounds of savoury/sweet almond flour shortbread, upon which to rest your favourite cheeses.  Or just to munch plain, because they are that good. 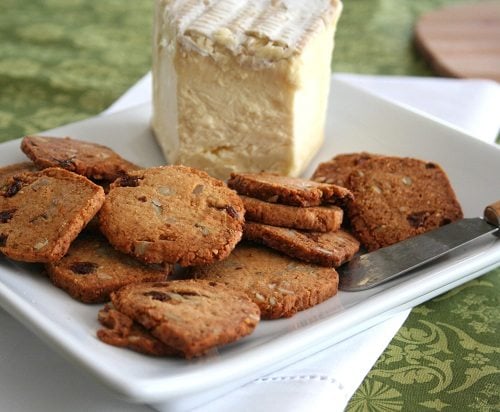 I first sampled the Raisin Rosemary Crisps when over at a friend’s house for dinner.  They had a cheese plate, and nothing to really put the cheese on except wheat-based crackers.  I am not at all hesitant about picking up chunks of cheese and popping them in my mouth – as far as I am concerned, good cheese needs no accompaniment.  But my friend mentioned that the Triple Cream Brie from Trader Joe’s was amazing when paired with the Raisin Rosemary Crisps so I had to give it a little sample.  And she was dead right.  There was something magical about the salty, tangy brie paired with the savoury but slightly sweet cracker.  I was in love, but held back from more samples for fear of a glucose spike.  Nevertheless, the flavours stayed on my mind and every time I saw that Triple Cream Brie (which is itself to die for), I thought about making my own gluten-free Raisin Rosemary Crisps.  It couldn’t be that hard, could it?

And then I was invited to be a California Raisins Ambassador and of course, the fate of the low carb, gluten-free raisin rosemary crisps was sealed!  It seemed like a perfect recipe in which to incorporate raisins in a healthy fashion.  Yes, raisins are high in carbs, but used sparingly, they make a wonderful, flavourful addition to low carb recipes.  And in these crisps, the raisins go along way, because they are chopped first and the crisps are so thinly sliced.  I was delighted by the results.  These had fantastic flavour and a crispy, buttery, shortbread texture. My kids loved them, and I had to shoo them away so I’d have enough to pair with my Triple Cream Brie! 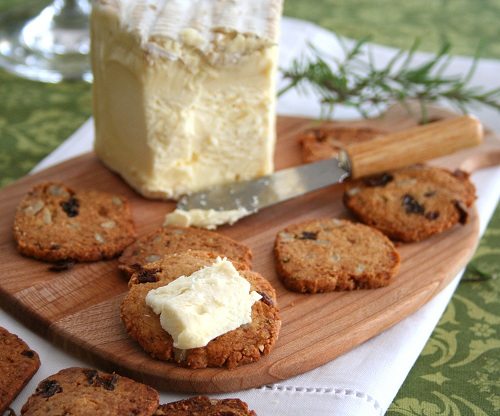 For those of you who love raisin recipes as much as I do, I wanted to alert you to the Simply Raisins Recipe Contest on Relish Magazine.  Relish is a national cooking magazine that comes as an insert in hundreds of newspapers all across the country.  It also has a fantastic online component.  This is your chance to get your recipes seen by thousands upon thousands of readers.  And you could win $1000 and a trip to visit the Relish Studios in Nashville.  For contest details, please see http://relish.com/simplyraisins/. 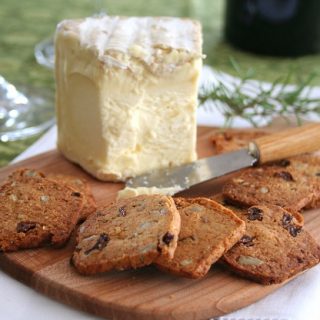