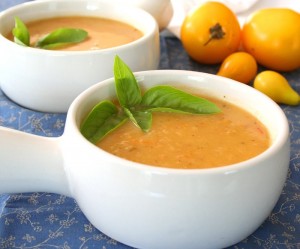 I’m about 4 years in to having my own backyard vegetable garden, and I have to say that each year has been wildly different and a huge learning experience.  Which really is to say that I have no clue what I am doing and it’s going to be a long time before I feel like I do.  The first year, we planted our garden in too shady a spot, which we only realized when the leaves were back on the trees.  The next year, we moved the garden a few feet forward but the trees had grown too and it didn’t help much.  Last year, we put in a raised bed smack in the sunniest part of the yard and had a little more success.  We had a decent amount of peppers, but most of our tomatoes got blossom end rot and we only got a single zucchini from four plants.  This year we thought we had it all worked out.  Three raised beds in the sunny part, beautiful rows of tomatoes, peppers and zucchini, and with pretty herbs in containers all over the patio.  With the warm weather starting in April, we just knew we were going to have a bountiful haul. 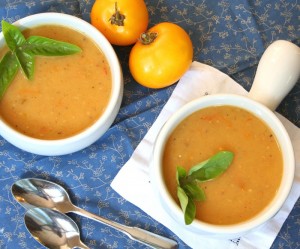 And we are having a bountiful haul…of tomatoes.  Our peppers are having a rough go of it and seem to be rotting from the inside out.  They look great, but just before they fully ripen, they start to get soft spots and then they rot and fall off.  Oh and we planted some jalapenos that have no heat whatsoever!  Our little serrano peppers are doing well, but that’s it.  And the zucchini seems unlikely to produce a single fruit this year.  There are plenty of male blossoms, but the female ones seem to shrivel up and die before they even get started.  I’ve researched that one a bit and we think we know the problem but it’s not something we can do anything about until next year.

So, back to the tomatoes, of which we have a gazillion and I am having a hard time keeping up.  I figured out that the blossom end rot from last year was from inconsistent watering, so I made sure to give them a little water every day this year.  And with the incredibly warm spring, we’ve had ripe tomatoes coming on since the middle of July.  I’ve already canned 7 pints of tomato sauce and have made numerous salsas, salads and soups.  I’ve given large bags of them to friends.  And right now on my counter sits a large bowl of tomatoes threatening to go bad before I can get to them.  I see another round of canning in my very near future! 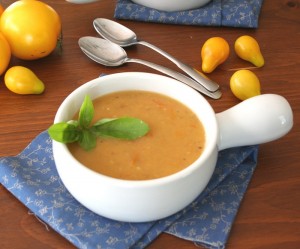 I planted several varieties of tomatoes, including some beautiful yellow ones.  I find that they actually have a little less flavour than the red varieties, but I just love the golden colour peaking out among the green leaves.  And the yellow grape tomatoes are seriously prolific, growing wildly out of control and spilling over the tomato cages and back over onto the ground.  They do have a tendency to split when we get some rain and then some hot weather, and they ripen so fast that I find myself with bowls upon bowls of them on the counter.  When I get too many, I roast them with a little olive oil, salt and pepper, and they taste like candy!  And although it isn’t exactly soup weather yet, I’ve already made several batches of this soup.  It’s heavenly!  I like to add a little hot pepper to give it a kick, but it tastes wonderful without as well. 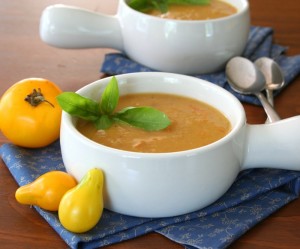 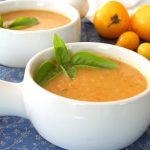 A delicious soup bursting with fresh, summery tomato flavor. Add a little hot pepper to give it a kick, or enjoy as is!