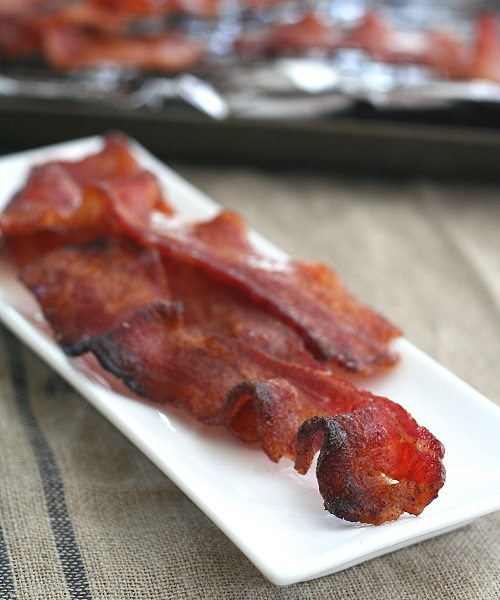 Sugar-free candied bacon with chipotle.  The tastiest snack in all the world.

Let’s face it, bacon is just about the best invention ever.  Whosoever thought to themselves “hey, let’s take this piece of fatty pork belly and slice it really thin, and smoke the hell out of it and make it super salty to preserve it, so then we can fry or broil it later” is brilliant.  Like, Einstein-level brilliant.  I’d like to shake this person’s hand.  I’d like to kiss this person’s feet.  Because bacon is the best.  Bacon makes me swoon.  There is no better smell in the world than frying bacon.  I should just stop here because there is no more to be said.  Bacon rules.  You cannot argue with bacon.

Can you improve on bacon?  No, absolutely not.  You can, however, come up with some interesting twists on bacon.  Bacon needs no embellishments, and yet it lends itself so readily to embellishment.  It can be dressed up or dressed down.  It can go sweet or savoury.  It can be the main character or it can play a supporting role.  Its versatility is endless, and if you keep any sort of eye on the foodie world, you will see people doing some pretty interesting things with bacon.  Things I never would have even dreamed of a few years ago.  But given my love of bacon, it all makes a great deal of sense to me now. 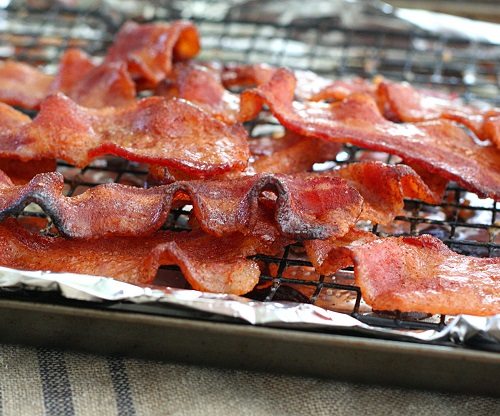 Bacon in sweet dishes was something of a revelation to me, because I’d always paired it with savory things growing up.  It took me a little while to wrap my mind around the idea, but I can say that I have now wholeheartedly embraced it.  That smoky saltiness turned sweet is powerful, make-you-weak-in-the-knees stuff!  So I decided it was time to try my hand at low carb candied bacon.  I modeled my version after the candied bacon recipe on Recipe Girl – if you don’t know Lori’s blog yet, you should! She’s got so many great recipes on there, and although they’re not low carb and gluten-free, they’re wonderful inspiration. And she’s a dear, so that helps too. I love Lori’s suggestion for making the bacon wavy by poking it through the slats in the baking rack.  The only problem is that my backing racks aren’t slats but filled in with cross-bars, so I couldn’t poke my bacon through. But I found that crimping the bacon into a wavy shape before baking did the trick just as well. 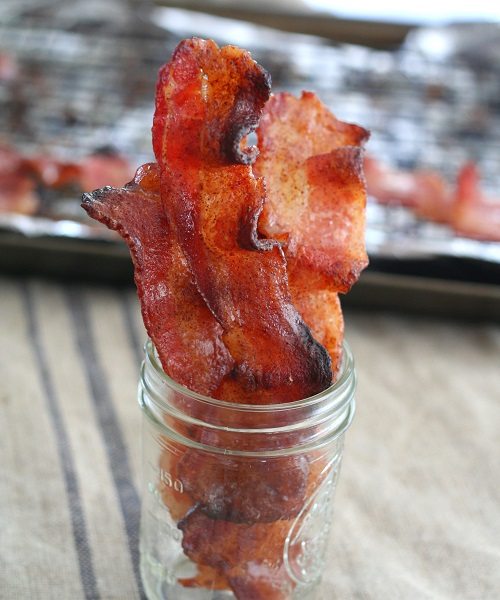 I did find I had to cook my candied for quite a bit longer. This may be due to the lack of real sugar, the heat of my oven or perhaps I just like my bacon a lot crispier than Lori does. Still, the final result was to die for. The bacon was both crisp and meltingly tender. And the sweet-salty-smokiness will blow your mind. I actually salivate as I write this. I can hardly wait to make it again! 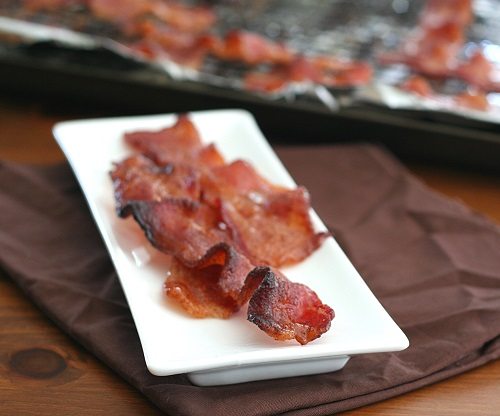 Serves 6. Net carbs are negligible (less than about 0.5 g per serving)