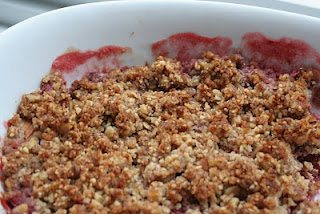 Yeah, yeah, I know. There have been hundreds of strawberry rhubarb crisp recipes lately in the food blogging world, each one more tasty than the last. So why would I dare post another and put myself up against so many talented bakers? Well, mine is specifically for the low carb/diabetic crowd. My strawberry rhubarb custard pie, although very good, just didn’t scratch the itch I had for an intensely rhubarb dessert. I wanted Rhubarb with a capital R. I wanted the dessert of my childhood, a true strawberry rhubarb crisp.

This was quite a challenge, considering how many crisp ingredients are off-limits to me now. Let’s see…no flour, no white sugar, no brown sugar, and little, if any, oats. Ouch! Oh, I can have butter aplenty, but I don’t think a crisp would get very crisp if it was topped just with butter! The one redeeming thing is that both strawberries and rhubarb are relatively low in carbs when it comes to fruit. I don’t quite know what I will do in late July and early August when peaches are in season. Cry, probably.

This was a real low carb makeover experiment. I pulled out a number of ingredients from my cupboard that I thought might work and just put a little of this and a little of that until I got the right “crumb” consistency. I actually ended up with a little too much of the topping and had to hold some back. Then I popped the whole thing in the oven and said a little prayer. 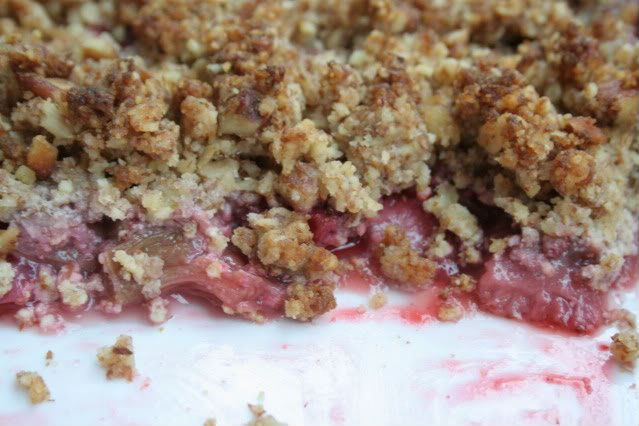 The Results: Maybe it was pure luck but this turned out better than I’d dared to hope. The crumb topping certainly looked the part during baking, and it all smelled very good when removed from the oven. I won’t pretend that it tasted exactly like the real thing, but it was close enough to satisfy my craving. The topping wasn’t quite as “crisp” as a traditional recipe (it would need real sugar for that), but it held up better on the next day, not getting soggy like a regular crisp topping sometimes does. I am very pleased and would happily recommend this to the low-carb crowd. With a little whipped cream on the side, it was a delicious low-carb dessert!

In a medium bowl, mix together rhubarb, strawberries and stevia. Sprinkle xanthan gum over and mix well. Spread filling in a 8×8 glass casserole dish or baking pan. If using a metal pan, grease bottom and sides prior to spreading the filling.

Bake for 30-40 minutes or until filling bubbles up and topping is golden brown. If topping appears to be browning too quickly, cover with foil until filling is done.

Remove from oven and let cool at least 10 minutes before serving.