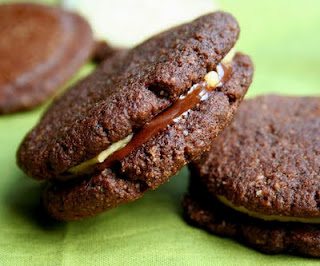 Summer is over, fall is here, and it is time for the September edition of The Secret Recipe Club. I couldn’t participate last month because of our family vacation, but I really do enjoy this monthly event. And The Secret Recipe Club has become so popular and has so many members that we’ve been split into three separate groups. I am part of Group A…obviously the best group of the bunch, being the first, the alpha, the top dog! And this month, I was charged with creating a recipe inspired by a blog called Parsley, Sage, Desserts and Line Drives. Now if that’s not an interesting blog name, I don’t know what is! It’s written by Lisa, and her tagline is “a whole lot of food with a side of baseball”. Well, doesn’t she sound like a nice, approachable sort of blogger?

And then I took a look at her recipes and I was floored. When it comes to pastries and desserts, this woman is good. And by that I mean CRAZY good. I have to confess, I was fairly intimidated by her creations, many of which are quite elaborate, with multiple steps and moving parts. Okay, I made that up about the moving parts, but her cakes are tremendous and have several layers, each with their own special texture and flavour. For example, in her recipe index I was immediately drawn to a recipe called Green Tea-Pistachio Mousse Cakes. But when I clicked on it, I knew instantly that I could never recreate such a gorgeous concoction. It had so many different elements and I’d never have the time or the patience to do them all. I considered just making the matcha-flavoured mousse, but compared to her creation, it just seemed so….boring. 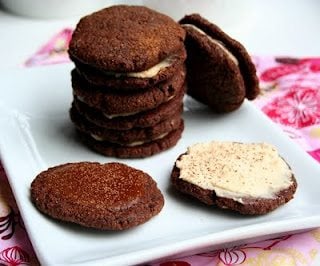 I rifled through her blog many a time, wondering what I could make that was a little simpler that I could also adapt into a low carb treat. Because although I do some conventional baking for the rest of my family, I do like to partake of the goodies too. And I kept coming back to a recipe that isn’t actually posted on her blog, although she did make it herself and linked to it. The original is from the Domino Sugar website. The name, and Lisa’s photos, sold me. Tiramisu cookies, a chocolate sandwich cookie with not one, but two fillings: mascarpone and chocolate, both with a hint of coffee in them. How could I resist? I was fairly certain that I could make a decent low carb version of the cookie and the chocolate filling, and thankfully mascarpone is low carb anyway. And the rules of the SRC are simply to make something from our assignee’s blog, with our own twists or adaptations as we see fit. For these cookies, I saw fit. 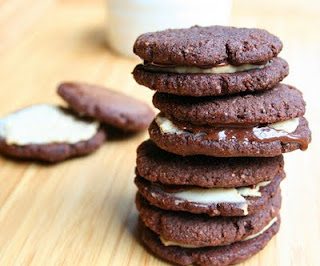 The Results: These were really, really good. But…there had to be a “but” in there, right? They just didn’t taste as much like real tiramisu as I had been hoping. Tiramisu is a lovely, light-textured dessert that tastes of coffee and mascarpone with a hint of chocolate. These cookies, although delicious, tasted mostly of chocolate. And I don’t think it was my low carb modifications that was the culprit here, as I tried to keep the proportions of flavours similar to the original recipe. The mascarpone, which has such a lovely sweet flavour on it’s own, was almost entirely lost and overtaken by the chocolate. And I really couldn’t get much of a sense of the coffee flavouring either. (Let me reiterate that although I found the inspiration on Lisa’s blog, this was not her recipe originally).

As my husband said, if he hadn’t known that they were supposed to be tiramisu-flavoured, he would have just thought that they were really delicious sandwich cookies. And my kids loved them, which is always a plus. So I can definitely recommend them overall. But here’s what I would do next time: Because there is chocolate in the cookie, I would skip the cocoa in chocolate filling and just flavour it with coffee. I also might consider increasing the mascarpone filling to allow it to come through a little more. But I will give you the recipe as is, and you can make the changes you see fit.

And can I recommend heading on over to Parsley, Sage, Desserts and Line Drives? You won’t regret it, she is a master at elaborate desserts! 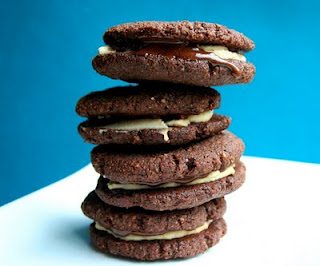 For the cookies, preheat the oven to 325F and line a baking sheet with parchment paper or a silpat.

In a medium bowl, whisk together the almond flour, coconut flour, cocoa powder, baking soda, salt and xanthan gum. Break up any clumps with the back of a fork.

In a large bowl, cream butter with erythritol until fluffy. Add the egg, vanilla and stevia and beat until just combined. Add almond flour mixture in two additions, beating after each.

Roll spoonfuls of dough into 3/4 inch balls and flatten with palms to 1/4 inch thickness. Bake cookies 10 minutes or until slightly puffed and firm to the touch. Remove from oven and let cool on pan.

For the mascarpone filling, stir coffee liqueur into cheese and whisk until thoroughly combined.

For the chocolate filling, combine ingredients and whisk until combined.

To assemble, spread the bottom of one chocolate cookie with the mascarpone filling and another with the chocolate filling. Press together to make a sandwich. Repeat with remaining cookies. Chill in refrigerator 2o minutes to set fillings.