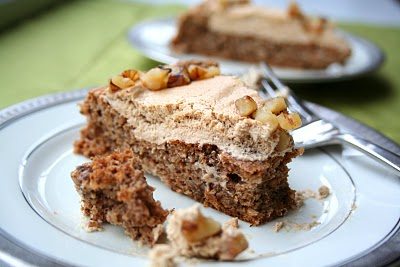 In this household, it’s not only holiday season, it’s also birthday season. We have a multitude of family members born in the late fall and early winter, so the usual hustle and bustle of the holidays is magnified with the hustle and bustle of birthdays. This is especially true when those family members are children. Although it means significantly more work for us parents, I feel that little kids need their own birthday celebration separate and apart from the holiday festivities. My beautiful Celia turned four this past weekend, and as my dad, who is also a December baby, was here with his wife, we had a little family celebration. There were cupcakes for the kids, and a low carb, gluten free walnut torte for the adults. 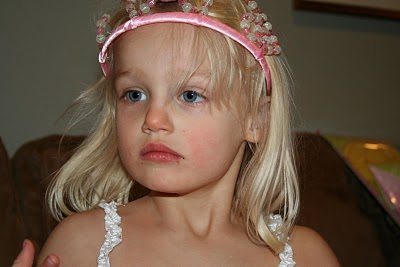 I may have mentioned my passion for walnuts on this blog a few times, so I will try to refrain from boring you with that again. Suffice it to say that when flipping through old back issues of Bon Appetit, a recipe for a flourless walnut torte stopped me dead in my tracks. A quick glance at the ingredient list confirmed what I already suspected – that I could make a sugar-free version of this that would be virtually indistinguishable from the original. The only change I needed to make was the sweetener. 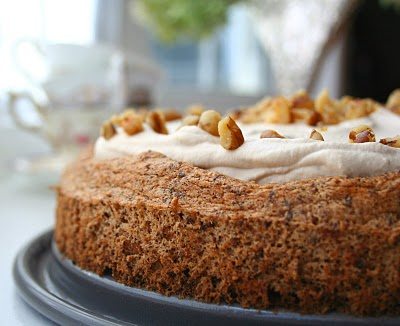 The Results: This really makes for a wonderful, elegant dessert. The texture is remarkably light, almost airy, from all the egg whites and whipped cream. And walnuts and coffee go surprisingly well together, it’s a flavour combination I wouldn’t think of on my own, but I won’t hesitate to make again. And if you are diabetic or a carb-counter, this is a dream dessert as each slice has only 2.9g of effective carbohydrate. Everyone agreed that you wouldn’t have a clue that this was a low carb version unless someone told you. 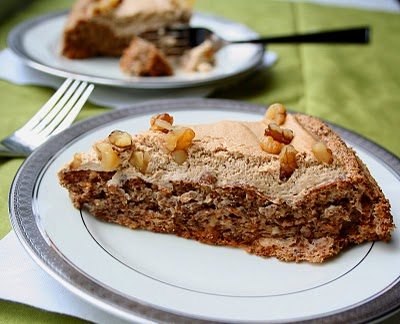 Preheat oven to 350F and butter the bottom of a 9-inch springform pan.

Process 1 cup of walnuts in a food processor until finely ground, but not clumping together. Do not overgrind as you will get walnut butter!

In a large bowl, beat egg yolks with an electric mixer until light and fluffy, about 4 minutes. Gradually add erythritol and then stevia extract, beating until well combined. Stir in ground walnuts.

Using clean, dry beaters, beat egg whites in another large bowl until stiff but not dry. Fold into nut mixture in two additions. Transfer batter to prepared baking pan and bake until a tester inserted in the middle comes out clean, about 40 minutes.

Cool for 5 minutes and then run a sharp knife between cake and pan sides to loosen. Remove pan sides and let cool completely on a wire rack. Cake will fall in center.

Makes 10 servings. 10.1g total carbs per serving but only 2.9g if you subtract erythritol.