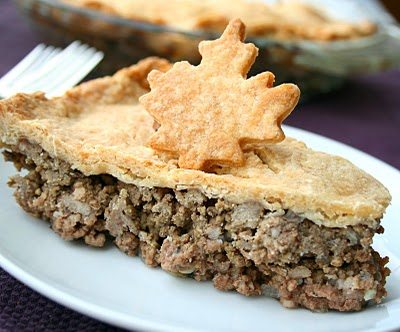 Growing up as I did in Canada, I took eight years of French, from Grade 4 through to Grade 12. The shameful thing is that I can hardly speak it at all anymore. Classroom french does not truly teach us how to speak the language, and my grasp on the vocabulary gets weaker with every passing year. And don’t even ask me about conjugation, I am all sorts of lost with my French verbs. This is made all the more shameful by the fact that some of my maternal family heritage is, in fact, French Canadian. I even have a distant ancestor, a great-great-grandfather or grand-uncle, who was mayor of Montreal. ‘Tis a sad business, then, that I fumble so badly with the French language. But I CAN make a mean tourtiere!

If you’ve never heard of it, tourtiere is a meat pie that is traditionally eaten at Christmas or New Year’s. It’s not made the same way in all places, but it usually consists of ground pork and beef, and is often spiced with cloves. This gives it a distinctive flavour, one I love and will always associate with Christmas. I began making tourtiere as a teenager, when I came across a lovely recipe for it in a holiday issue of Canadian Living magazine. I showed it to my mum and she agreed that we could make it for Christmas Eve dinner, and that was that. We made it every year afterwards, and I believe she still has a copy of this recipe, written out in my sloppy, teenage handwriting.

My husband and I have since started our own Christmas traditions, but we do try to have tourtiere some time around the holidays. This year, we actually had it on New Year’s Day. I found a simple recipe on the internet some years ago, when I was an overwhelmed, over-tired new mother, and it’s been the one I’ve followed ever since. Not to the letter, of course, because I never do. I always add more cloves and other spices than the recipe calls for, as I find it really amps up the flavour. I also only ever do a top crust, because I like the meat-to-pastry ratio better that way. And this year, I actually made two tourtieres…one with regular pie crust, and one with a low carb crust made with carbalose flour so that I could fully indulge. 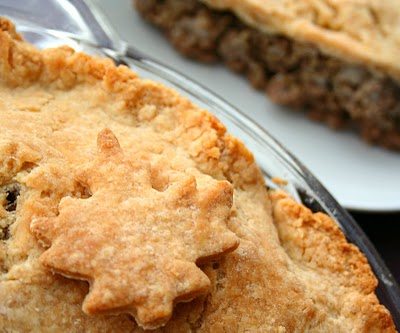 The Results: I’ve had this recipe many time before and love it, and this time was no different. For the lower carb version, I wasn’t sure how the carbalose flour would fare when made into pie crust, but I am pleased to say that it held up very well. I did have to add a little more ice water to get the dough to come together, but once it did, it acted just like regular pastry. My husband had a piece of both tourtieres and said that he could barely tell the difference in the crusts.

For the record, I have a fear of handling my pie crust dough too much, and thus I usually underhandle it. It results in a lovely, flakey crust that isn’t quite as nice and smooth as I’d like to to be. You can use your own favourite pie crust recipe here, but in case you don’t have one, I will provide you with mine. It’s a combination of a recipe King Arthur Flour and one from The America’s Test Kitchen Family Baking Book and it includes a half tablespoon of buttermilk powder. To make it more flakey, I use a combination of butter and vegetable shortening. It’s delicious! 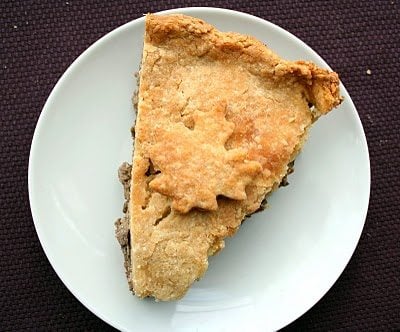 In a large, heavy skillet, brown beef and pork until almost fully cooked. Add onion and garlic and saute until onion is translucent, about 5 minutes.

Add water and spices and bring to a boil. Reduce heat to low and simmer until meat is fully cooked, about 5 minutes more.

Spoon meat and any jucies into a 9-inch pie pan. Roll out pastry into a 10-inch circle and lay over filling. Trim so that dough overhangs dish by about ½ inch, then tuck edges under so that they are flush with the lip of the dish. Flute edges with fingers. Using a sharp knife, cut 5-6 slits in top of crust to allow steam to escape.

Bake for 35-40 minutes, or until crust is golden brown. Let cool 10 minutes before serving.

Process the flour, salt, sugar and buttermilk powder together in a food processor utnil combined. Scatter butter and shortening over the top and pulse until the mixture forms coarse crumbs.

Thansfer mixture to a medium bowl. Sprinkle four tablespoons of ice water over the mixture. Stir in with a rubber spatula, pressing the dough together with the back of the spatula. If the dough is still crumbly and does not stick together, add more water, 1 tablespoon at a time until it does.

Form dough into a ball and flatten into a 4-inch disk. Wrap tightly in plastic wrap and chill for at least 30 minutes. Roll out as directed in recipe.

*For a low carb version, you can use the same amount of carbalose flour, and a sweetener like xylitol or erythritol in place of the sugar. You may find that you have to use more water to get the dough to come together.