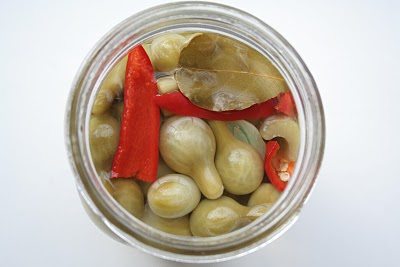 In the Northeast, waiting for green tomatoes to ripen in October is like waiting for Godot. I am impatient at the best of times, so you can imagine how poorly this exercise in futility sits with me. My husband has managed to convince me to leave a few little clusters of the fruit alone to see if we will get a warm spell, but for the most part, I have picked the stubborn little buggers to use as is. I have already made two rounds of my Spicy Green Tomato Soup with the bigger beefsteaks, but for the little grape tomatoes I wanted to try something different.

A few years ago on a visit, my father-in-law brought a jar of his homemade green tomato pickles. Up to that point, I had no idea you could pickle green tomatoes. Now, I realize that you can pickle a wide variety of foods, some of them more appetizing than others. But I was very taken with the green tomatoes at the time, and enjoyed them in my martinis as well as straight out of the jar. When I saw that we were going to have a lot of green grape tomatoes at the end of the season, I knew I wanted to try pickling them.

Most of the recipes I came across called for at least four or five pounds of tomatoes, and had you slicing, salting, and then boiling them. Since I only had about a quart of little tomatoes, I didn’t want to go through the whole labourious process of properly canning them. I finally came across this recipe for refrigerator pickles that also allowed me to keep my little tomatoes whole, just like the ones my father-in-law had made. It was incredibly simple and straightforward compared to all the other recipes, so I figured it was worth a try. 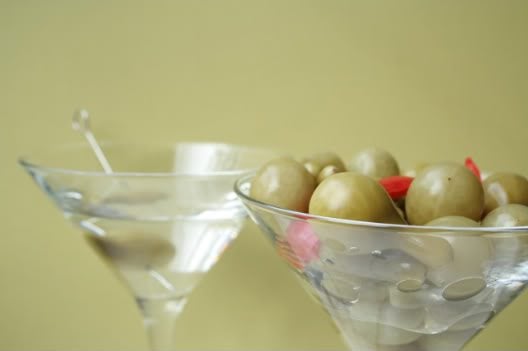 The Results: What a great way to use up small green tomatoes! These taste much like I remember my father-in-law’s tasting, and they were so simple to make, a caveman could do it. I’ve already eaten three, and I plan on having one in my martini tonight. They are salty and a bit spicy, and the actual tomato retains a little crunch to it, just like a good cucumber pickle. I don’t imagine this single quart jar is going to last very long. I am hopeful that we don’t actually get a warm spell after all, and that I can harvest another quart or so for a second round before the frosts hit.

I tweaked the original recipe a little bit, in that I added a fresh chili instead of dried and I quartered my garlic cloves to get more of a garlic flavour. I also couldn’t manage to wait the full three days to try them, I had to have a taste at two and a half days. Have I mentioned that I am impatient???

In a small saucepan, bring water, vinegar and salt to a boil. Add to jar. Seal tightly and let sit at room temperature for three days. After opening, store in refrigerator.

That is it. Really, truly, that is all there is to it!