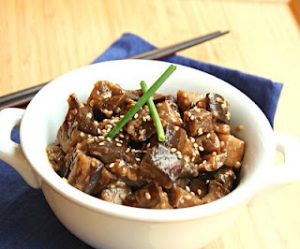 Today I have nothing for you.  Nothing!  Well, okay, I do have a recipe and it’s a tasty one.  But I have almost nothing new to tell you, no little story, no little anecdote.  I was going to write about Camp  Blogaway and tell you what a wonderful experience it was.  But since it was such a wonderful experience, I don’t want to short-change it and I simply didn’t have time to write all of that.  Besides, I have a recipe idea to go with the Camp Blogaway experience and I haven’t had time to execute that.  So that post will have to wait and instead I am bringing you a simple eggplant dish.

Eggplant is something I eat quite a bit of these days.  I know some people are not so fond of eggplant and I wonder why, since to me it’s one of those foods that doesn’t really have a distinctive flavour on its own, but instead takes on the flavours of the other foods you add to it.  It’s sort of a “filler” vegetable, in my mind, one that adds bulk to the dish but isn’t the main flavouring.  I cook many ways, but I often use it sautes and stir-fries, along with other vegetables and lots of seasoning.  Eggplant lends itself well to seasoning and spice, as it just sort of soaks up whatever flavours you want it to take on. 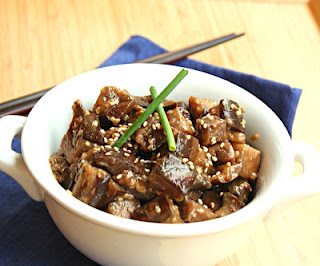 In this case, I wanted to come up with a thick, garlicky sauce that coated the eggplant.  But I wanted to keep the flavours simple and clean, so that the garlic and the sesame could shine through.  Eggplant can soak up a lot of oil during cooking, so I held back the toasted sesame oil during the cooking process and instead used it as a finishing oil at the end, drizzling it on to keep the flavour fresh.  I thought this was a wonderful side dish, easy to prepare and a perfect low-carb accompaniment to chicken or fish. 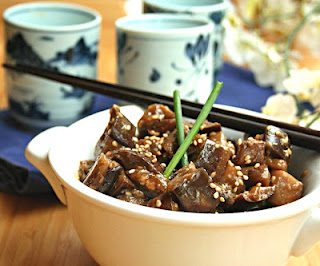 Cube eggplant into 1/2 inch cubes and place in large colander or sieve set over a large bowl.  Sprinkle eggplant generously with salt, mixing to combine, and let drain at least one hour.

Heat the butter in a large skillet over medium heat until melted and froth is beginning to subside.  Saute eggplant until soft, 5 to 7 minutes.  Add garlic and saute until fragrant, 30 seconds.

In a small bowl, whisk together water, soy sauce and ground ginger.  Add to skillet and stir until eggplant is well coated.  Sprinkle evenly with xanthan gum and stir quickly to combine.  Sauce should thicken very quickly.

Remove from heat and stir in sesame oil and toasted sesame seeds.