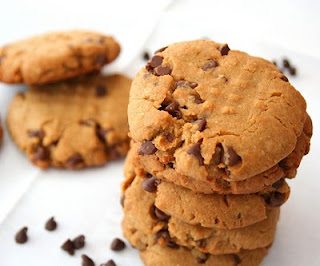 I was an exceptionally picky eater as a child. It’s hard to imagine now, but I just didn’t really like food much as a kid, and it was a huge battle of the wills between me and my mother to get me to eat. I often sat at the dinner table long after everyone else had finished, not being allowed to get up until I’d eaten more of my meal. Since I was a tiny child as it was, it worried my mum to see me turn up my nose at all this food. I grew out of it, of course, and as a parent myself now, I know firsthand the worry she faced having such a picky eater. My older two are pretty good eaters and for a while there, I thought I’d dodged a bullet. Then my third child came along(unexpectedly)and doing her best to make me grey before my time. Given that she, too, is a tiny child, I want to feed her and fatten her up, but she does her best to thwart my efforts.

One thing I can guarantee she will eat, any time of day or night, is peanut butter. To see her down half a peanut butter sandwich always feels like a small victory. But she started daycare this fall, and like many schools in the area, this one is nut-free. So peanut butter sandwiches are OUT for school lunch. On the advice of some other parents, I purchased a jar of Sunbutter, hoping to sneak this one past her. I tasted it myself and I found it rather intense, but like something I could get used to. So I made her a test sandwich with some Sunbutter and some jam and crossed my fingers. She took one bite and pushed the plate away. And my other two kids didn’t seem too enthusiastic either. They were all too used to the sweet/salty taste of peanut butter to be fooled by a sunflower seed imitation. 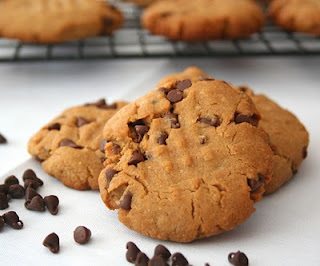 I stared at the jar of Sunbutter in dismay. What the heck was I going to do with a barely-touched jar of the stuff, which didn’t come cheap, if I couldn’t get my kids to eat it in sandwiches? Inspiration struck, as it often does, when I was poking around Foodgawker and saw a recipe for healthy, whole wheat Peanut Butter Chocolate Chip Cookies from The Faux Martha. She had, in turn, adapted the recipe from 101 Cookbooks. I thought that perhaps I could get my kids used to the distinct taste of Sunbutter if they first tried in a sweet cookie.

I knew from the start that I wasn’t going to follow the recipe as written at all. First, I was going to half the recipe, because if it didn’t work out, I didn’t want a whole lot of inedible cookies floating around. I also wanted these to be a school-friendly snack, so I added an egg to keep it from being too crumbly. I love crumbly cookies, but they don’t survive the lunchbox very well. I decided to use honey in place of the maple syrup, but I wanted to cut back on that too (honey, after all, is still a form of sugar), so I subbed in some Stevia in the Raw. And I just couldn’t stomach the idea of olive oil, so I went with melted coconut oil. 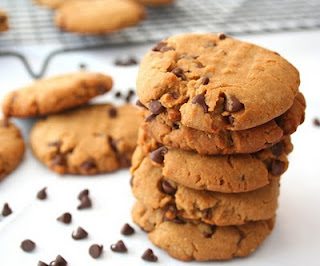 The Results: Victory! A healthy cookie that all three of my kids loved. This is no small feat, let me tell you. I tried a bit, and I have to say, if no one told me, I wouldn’t know they weren’t peanut butter cookies. They look the same, certainly, and had great flavour that was reminiscent of peanut butter, but that had it’s own sort of sunflower thing going on. I did notice that after the first two days, they became a bit drier, although they still tasted great. I suspect this is a result of the low sugar content, since sugar attracts moisture. So I would keep the batches no bigger than what I have in the recipe, unless you are sure they will get eaten within two days.

Want to hear something funny, though? Turns out my little one WILL eat Sunbutter sandwiches at school. I packed one in her lunch the first day and they told me she ate it right up. I guess when push comes to shove and that’s all you’re getting for lunch, you eat it. Or when your mother isn’t hovering over you, hoping you will eat something! 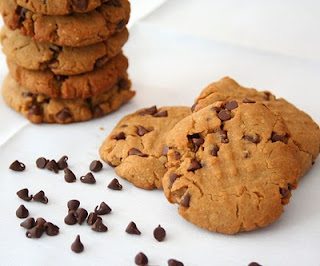 Preheat oven to 350F and line a baking sheet with parchment paper or a silicone mat.

In a medium bowl, combine the flour, baking soda and salt.

Form by hand into 1-inch diameter balls, then flatten by pressing down with palm of hand. Use a fork to create a hatched pattern. Bake 8 to 11 minutes, or until slightly puffed and lightly browned.

Let cool on pan for a few minutes, then transfer to a wire rack to cool completely.

*Stevia in the Raw is a stevia product that measures cup for cup like sugar. If you are using powdered or liquid stevia, you would use significantly less (more like ⅛ teaspoon). Sweeten to taste.

Linked these to the Lunchbox Project on Family Fresh Cooking!