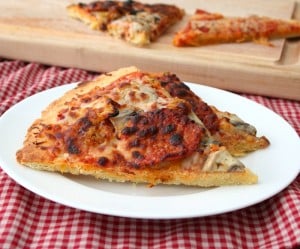 Ask many low carbers what they miss most about their old diet, and the vast majority of them will say pizza.  I often say pizza, and I was never that much of a pizza fanatic.  I was certainly not one of those people who ate pizza every day in university, although I liked it well enough.  I didn’t go out of my way to eat pizza, but I didn’t say no to it either.  But on a low carb diet, I often find myself wistful about it  It’s just that pizza is the whole package, you know?  It has the bread and carbohydrates that most people in Western society crave, it has a touch of sweetness from the pizza sauce, and it has meat and cheese and perhaps a few veggies.

So I’ve long been on a mission to make a really great bread-like pizza crust.  Yes, I know there are lots of interesting and healthy low carb “pizza crusts”, made with things like cauliflower or zucchini, and I think that’s all well and good.  But I wanted something I could serve to my kids and not see that eye-roll or that look of horror that I had so bastardized one of their favourite foods.  That meant that the crust had to be as close to the real thing as possible. 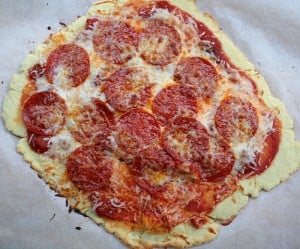 It definitely took a few tries to get this one right.  My first was good, but a touch on the soggy side.  It just didn’t quite stand up to the toppings well enough, although the flavour was fantastic.  So on the second go round, I added more oat fiber for dryness and structure, and a little less liquid.  I also baked it a little longer without the toppings, and a little less with them.  Broiling the pizza at the end helps melt the cheese and get it nice and browned.  The whole family loved both attempts, and the kids ate it without question, but the second try held together a little better.  It’s still on the fragile side compared to wheat dough, but it’s a fantastic stand-in!

If you have a pizza stone, I definitely recommend using it.  The pizza crust is good on a regular baking sheet but slightly crisper and better on the stone.  Let the stone heat up while you are preheating the oven, and then just transfer the piece of parchment paper with the crust on it to the stone. 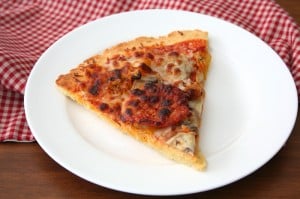 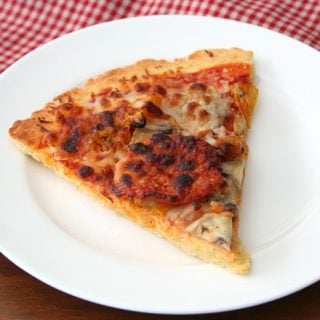