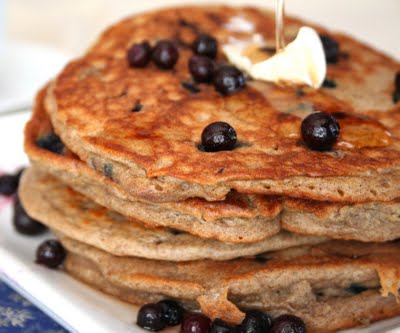 I know that Easter is this Sunday and is supposed to be a day of miracles, but I declare that last Sunday was a pretty miraculous day in our house. Miracle #1: I slept in until after 7 AM. I am usually awake before 6 AM so this counts as sleeping in in my world. Miracle #2: My two older children were already up, playing quietly downstairs. If you have young kids, you know how remarkable this is. When they wake up before me, they usually take it upon themselves to wake me up as well. They do not respect their parents’ need for sleep. Miracle #3: My two older children were playing quietly TOGETHER. You could have knocked me over with a feather, I was so surprised. These two are usually at each other’s throats (in fact, they are currently screaming at each other this very moment). Miracle #4: The little one was still asleep, and slept in until past 8 AM. This likely means she was partying in her crib at some point during the night, but it was a welcome change to have her still asleep when I woke up.

So, what to do on such a miraculously quiet, peaceful Sunday morning? Make pancakes, of course! My children love pancakes, but the effort and mess involved means that I don’t make them very often. Something about the peacefulness of the morning inspired me to reward everyone with a batch of fluffy, hearty pancakes. I will confess that a few years ago, I would have reached for the box of Bisquick or other pre-packaged pancake mix. It’s not that I didn’t know HOW to make pancakes from scratch, but since I don’t love them myself, I wouldn’t have been bothered. But a lot has changed since becoming a diabetic, and I have my eye on my whole family’s diet. We always ate fairly healthfully, but now whenever I can sub in a healthier version, I do. With the exception of some decadent desserts, of course! 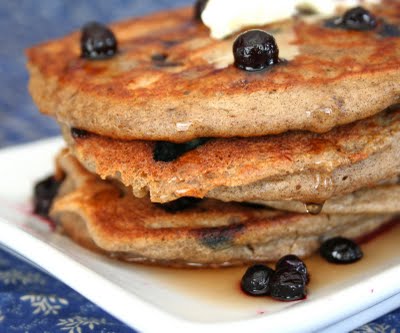 I’ve had a bag of buckwheat languishing in my cupboard for a while now. It’s not exactly low carb, but it is a good, high fiber, healthy alternative to wheat. In this case, I knew I wanted to combine it with whole wheat flour, so these are not gluten free pancakes but they are whole grain. I found a decent looking recipe from Ellie Krieger to follow as a guide, but I made a lot of changes. I did a recipe and a half, I added some whey protein powder, replaced the buttermilk with almond milk (but I did put in a tablespoon of buttermilk powder), and I didn’t mix the blueberries into the batter. Instead, I sprinkled them over batter as it was cooking on it’s first side. In the past, I’ve found that adding blueberries directly to the batter means that most of them sink to the bottom and your first pancakes have very few while your last pancakes have a lot. Adding them to the pancakes while they are cooking means a more even distribution and you don’t risk turning all of your batter blue when mixing. 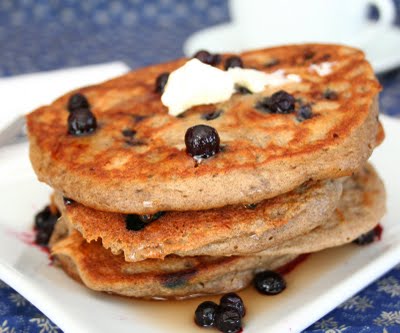 The Results: I was really impressed with these! I was concerned that the buckwheat and whole wheat would make them dense like pucks, but they were remarkably fluffy. I think this was in part due to the protein powder I added. And the buckwheat flavour, which is distinctive and rather rustic, was present but not overpowering. The kids didn’t bat an eye, as far as they were concerned these were regular pancakes and they were not at all put off by my healthificationn of their favourite breakfast. Everyone asked for seconds. I had one myself (with sugar-free syrup and a run after breakfast) and I loved them. They were so much more flavourful than regular white flour pancakes. And they were hearty enough to keep us all full for a good long while.

If you are looking for a healthier pancake option, look no further. Your whole family will love these. 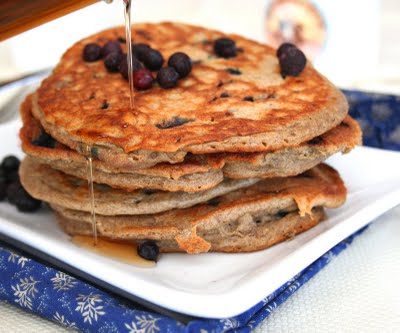 In another bowl or large measuring cup, beat eggs lightly and then stir in almond milk and canola oil. Add wet ingredients to dry and mix until just combined. Do not over mix.

Preheat a griddle or large skillet over medium heat and brush with oil or melted butter. Scoop batter onto skillet in ¼ cup amounts. Sprinkle each pancake with 1 to 2 tablespoon blueberries. Let pancakes cook until bubbles are forming on the top and the bottom is golden brown, and the flip carefully.

Cook on the other side until golden brown. Sprinkle each with remaining blueberries and serve with maple syrup.