These easy caramelized Brussels sprouts are tossed with brown butter for a truly delectable keto side dish. They take less than 15 minutes to make and will turn even the most diehard skeptic into a sprouts lover!

The best Brussels sprouts recipe ever, right here. Nothing you can say or do will change my mind on that score. Crispy but tender, not mushy in the least, they are Brussels sprouts perfection.

Truth be told, I love sprouts and have several delicious ways to prepare them. Air fryer Brussels sprouts are quick and easy, and my Brussels Sprouts Casserole with Bacon is so creamy and rich.

But caramelizing the sprouts in a hot pan and then drizzling them with that magical elixir, browned butter, takes them from really good to AH-MAZING.

And it’s this recipe that turned my husband from a hater to a lover. It’s just that good.

It’s ridiculously easy to make these caramelized Brussels sprouts, and that’s part of their appeal. There’s no oven to preheat, no special sauces to make, no simmering or fussing of any sort.

Just flash fry them in a hot skillet, sprinkle with a little salt and pepper, brown the butter in the same pan, and you’re done.

I created this recipe back in 2014 for A Sweet Life, and I haven’t changed a thing since then. We love it as is but one of my readers has a delicious little addition:

This is my favorite way to do Brussels sprouts–they are so lovely and sweet and a little bit crispy. I like to put some crushed garlic in the pan with them to caramelize as well.

This recipe takes only 3 basic ingredient, besides the salt and pepper:

Tips for making this recipe

And that, my friends, is all there is to make the best keto Brussels sprouts ever. Delicious! 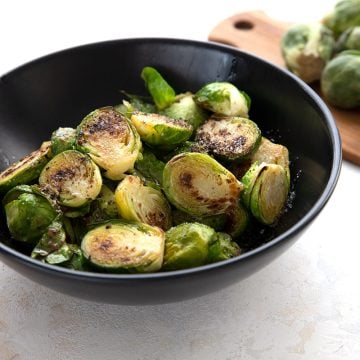