If you are attempting to go sugar free, chances are that you are going to run into recipes made with stevia. Sooner rather than later. You simply won’t be able to avoid it. Fortunately, it’s now a fairly easy-to-obtain ingredient, sold in supermarkets, health food stores and all across the web under various guises. Sometimes it’s in liquid form, sometimes it’s powdered. Sometimes it’s mixed with other alternative sweeteners, sometimes it comes on its own. But WHAT is it? I mean really, what do you know about stevia? I will tell you, I knew next to nothing before becoming a diabetic. I knew it was supposed to be all-natural, I knew it was supposed to be sweet. Beyond that, it was barely a blip on my radar.

Here’s what I know now…stevia comes from the leaves of a plant called Stevia rebaudiana, native to Paraguay. The compound that comes from the leaves is much, much sweeter than sugar (up to 30 times more sweet, according to some). Stevia has been used as a sweetener by native Paraguayans for centuries, and is popular as a sugar substitute in Asia. But in the US, Canada and Europe, it was only recently approved by the FDA as a sugar substitute. Prior to a few years ago, stevia could only be sold as a dietary supplement, since the FDA has little control over supplements (a rather scary thought, no?). In 2008, the FDA approved rebaudioside A, a very refined stevia extract, and now it’s popping up all over the place in diet foods, drinks and sweeteners like Truvia (a combination of erythritol and stevia). 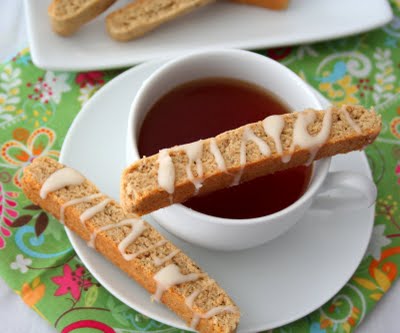 I’ve been using stevia for a while now, almost exclusively in its liquid form. But I had a chance to try Stevia in the Raw recently, a product I’ve been eyeing in magazine ads and on grocery store shelves. Because stevia extract is so sweet, it can be hard to figure out how to cook and bake with it. It takes a little getting used to, and I’ve learned from experimenting with it. But Stevia in the Raw takes the guesswork out of it, by producing a product that can replace sugar, cup for cup. To make it so, it is combined with maltodextrin, a food additive made from starch and found in many foods and drinks. 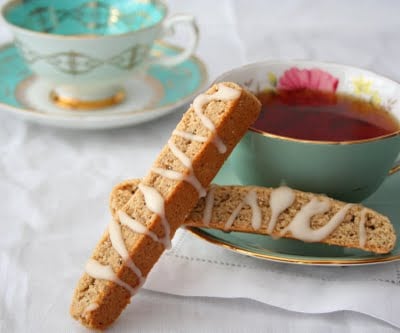 I’ve gotten so used to my own methods of sweetening my goodies, I almost don’t know how to use anything that can be substituted for sugar cup for cup anymore! But I decided I had to give it a try and biscotti seemed like an ideal trial recipe. I was craving some to go with my morning coffee and I had the idea to flavour them with the spices that give Chai tea its flavour. I have fallen in love with cardamom lately, using it in cakes and cookies to give them an exotic flair. I keep the seeds whole and grind them as I need them. And it’s a spice with a lot of presence, so a little goes a long way. 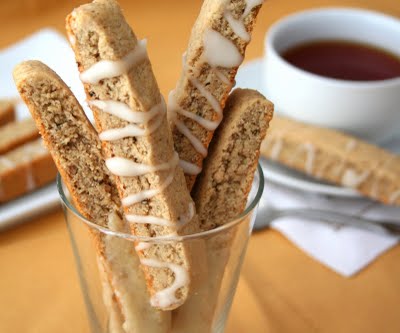 The Results: What can I say about biscotti that hasn’t already been said? It’s crunchy and hard but softens up so perfectly when dipped in coffee (or tea, if you are a tea drinker). The chai spices are wonderful in it, and the cardamom is present without being overwhelming. And the Stevia in the Raw performed very well! I put in ¾ cup and it was definitely sweet enough. I could almost cut back to ½ and be happy, but my tastebuds have changed and tend not to like things very sweet anymore. I certainly wouldn’t put more than 1 cup in this recipe.

I like this product quite a bit and will definitely continue to use it. There is no powdered form (yet), so the glaze for these biscotti is made with powdered erythritol. I certainly won’t give up on my other sweeteners, like erythritol, xylitol and liquid stevia, but it’s good to be able to add another reliable product to the mix. I can see using it to sub out some of the sugar in treats for my kids, like cookies and cakes, to help cut down on their sugar consumption.

One small note: the glaze on these biscotti is almost purely decorative. It doesn’t really add or detract from the flavour, it’s just to make them a little more visually interesting. So I won’t be offended if you leave it out! 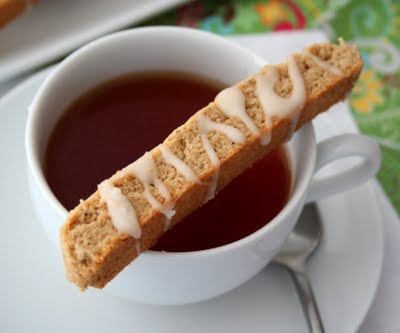 Preheat oven to 325F and line a baking sheet with parchment paper.

Turn dough out onto baking sheet and form into low, flat log, 10 x 4 inches. Bake 22 to 24 minutes, or until lightly browned and firm to the touch. Remove from oven and let cool 15 minutes. Reduce oven temperature to 250F.

With a sharp knife, gently cut into 15 even slices. Place slices back onto baking sheet cut-side down and bake for 15 minutes, then flip each slice and continue to bake for another 15 minutes. Turn off oven and let sit inside until cool.

For the glaze, whisk together the powdered erythritol and the tea until smooth. Drizzle over cooled biscotti and let set.

Serves 15. Each biscotti has a total of 5g of carbs and 2g of fiber.