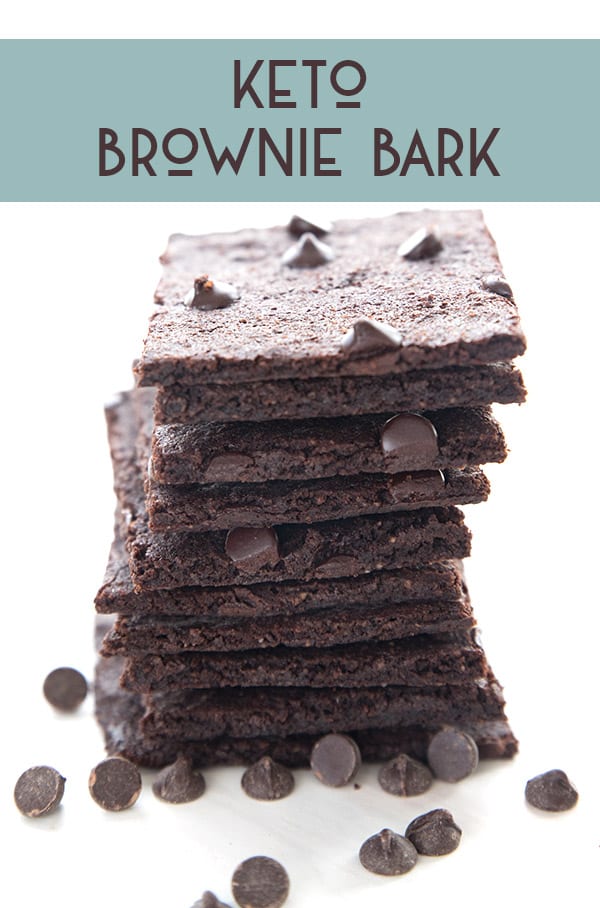 Well, this keto version of the famed Brownie Brittle is like the last kind of brownie. All crispy chocolate deliciousness, from start to finish.

I have a deep and abiding affection for my fudgy keto brownies and usually, the fudgier, the better. But I have to say, that this crispy keto brownie bark is such a delicious treat.

This low carb brownie bark recipe has been on my blog since 2013. Back then, I was doing something I called Makeover Monday, where readers would send in requests of high carb treats they loved, and I would take a stab at making a low carb, sugar-free version. Someone told me that they adored the Brownie Brittle from Sheila’s and need a healthier replacement.

Since it was a commercial product, I had my work cut out for me. I have never even tasted the original Brownie Brittle, so making it over was a bit of a challenge. Thankfully, I found a few homemade brownie bark recipes and I set about modifying them to suit my low carb ingredients. 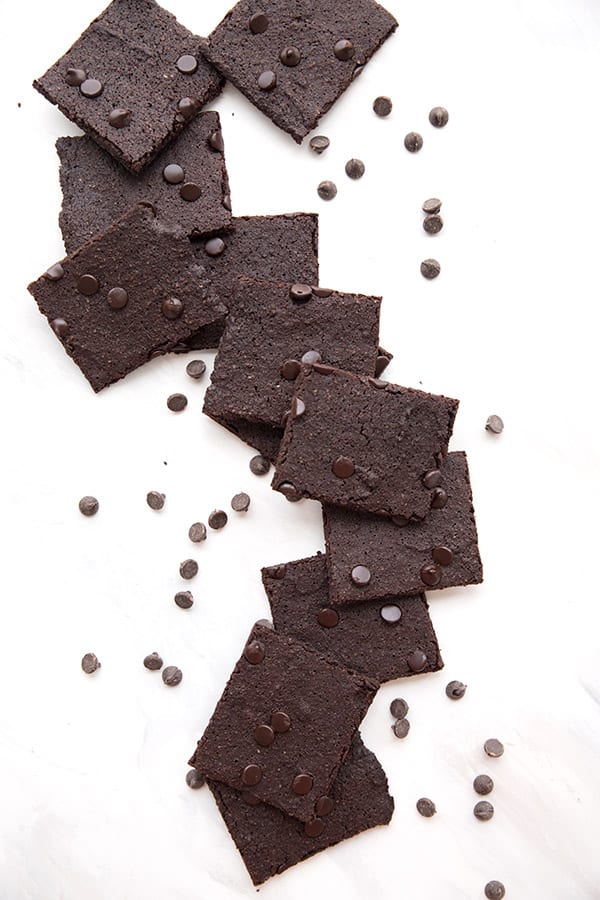 I was absolutely thrilled with the results. A rich chocolatey crisp that has all the flavor of a real brownie. And it’s a kid-pleaser, this one. I recently served it at a get together and it disappeared so fast, I only wished I’d made more.

What’s in a name?

Brownie Brittle is actually a trademarked term so I cannot officially call my recipe by that name. I know one blogger who used the term and actually received legal notices from the company. That seems a bit excessive to me, but I respect copyright and so am calling mine Keto Brownie Bark.

Or Keto Brownie Crisps? Keto Crispy Brownies? You tell me. What works best here? Whatever you call them, they are delicious! 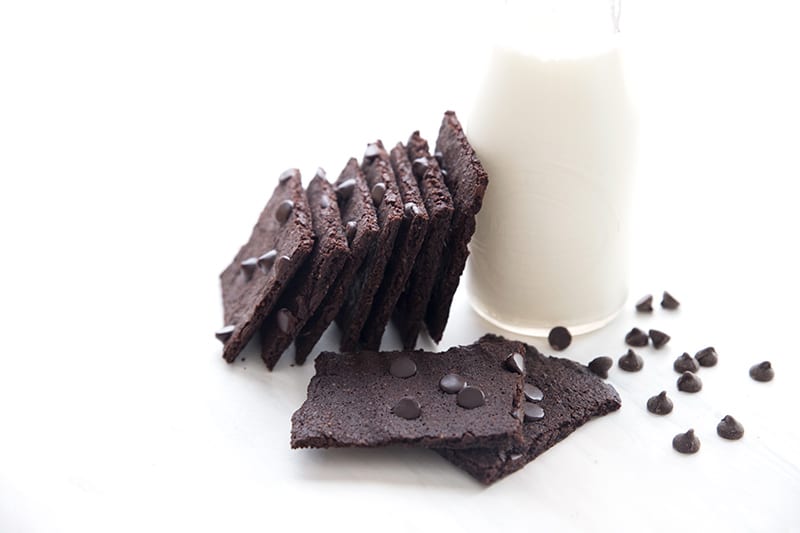 How to make Keto Brownie Bark

So as with anything made with alternative low carb ingredients, there are some tricks to getting this one right. Here are my best tips for getting perfect results:

1. Use a finely ground almond flour like Bob’s Red Mill. It really needs to be blanched and fine, to mimic the texture of the real brownie brittle. Coarse meals will produce a grainy batter, and you may have trouble getting the brownie bark to crisp up properly.

2. Use an erythritol based sweetener, and I recommend Swerve. This might be the most important factor here. Whenever someone tells me that the brownie bark didn’t crisp up properly, it usually turns out that they were using something else. Bocha Sweet, allulose, and xylitol all produce more cakey, less crispy results.

3. In the original version of this recipe, many people found it a bit too sweet. So I cut back the sweetener in this updated version to a ½ cup.

4. Use only egg whites, not the whole egg. Egg yolks contain a lot more fat and can make the brownie crisps too soft.

5. Bake them twice. Just like biscotti, this copycat brownie brittle is soft after the first baking but continues to crisp up in a warm oven.

6. And if you are still having trouble getting them to crisp up, you can keep returning them to the warm oven until they do. Don’t set your oven any higher than 175F, or they may overcook and become burnt.

7. And don’t feel that you are limited to my chocolate chip brownie bark version. There are plenty of tasty things to sprinkle on, like chopped pecans or walnuts, or some of the new sugar-free white chocolate chips. 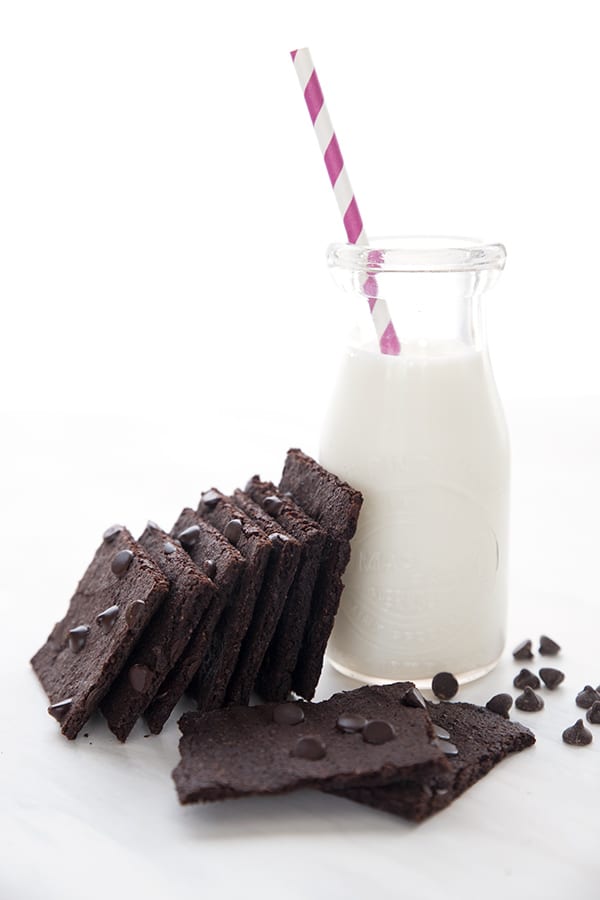 Can you make Keto Brownie Bark ahead?

Indeed you can. Unless you live in a particularly humid environment, these delicious brownie crisps can be made several days in advance.

I recommend letting them cool completely and then simply storing in a container on your counter. Dry crisp recipes like this don’t do as well in the fridge, as it’s a more humid environment and they can take on the moisture and become soft.

These should be good on your counter for up to 5 days, possibly longer.

And they make fabulous keto holiday cookies for sharing! 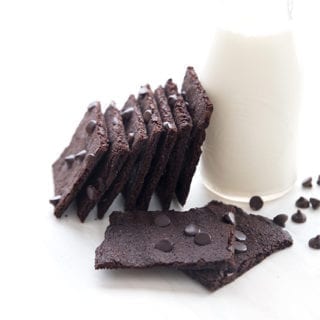