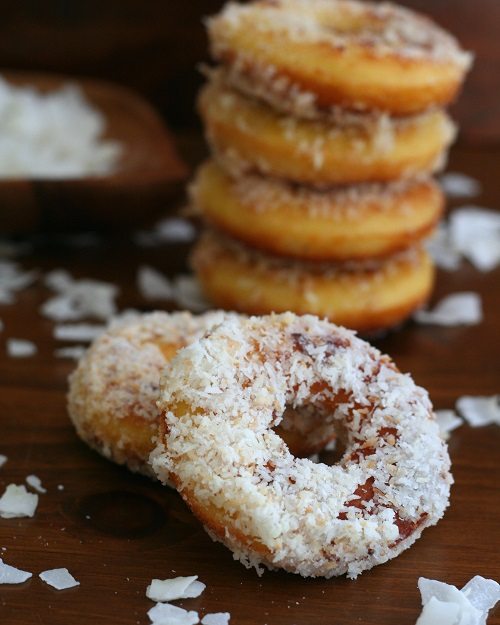 I am about to toot my own horn here.  You ready for this?  You might want to stand back, it’s going to be a bit loud.  Cover your ears!

YIPPEE, I MADE FRIED COCONUT FLOUR DONUTS!  Sorry about the all caps, but it needed to be done.  I needed to shout a little bit, because coconut flour is such a tricky ingredient and getting it to fry up without disintegrating in the oil is a sweet little accomplishment for me.  And by sweet, I  mean sweet with that real fried donut flavour.  Baked donuts are all very well and good and I love them, but this homemade fried donuts recipe is everything a donut should be.

And I am very thankful for whoever invented the donut pan, as it allows us home cooks to easily whip up baked donuts for breakfast.  But let’s face it…baked donuts are really donut-shaped muffins or cupcakes. As a general rule, I am okay with that. It’s really a lovely thing to have another shape for my muffins and my cupcakes, especially since they delight my kids so much.  Somehow, being circular with a hole in the middle makes those donut muffins that much more exciting to my kids. 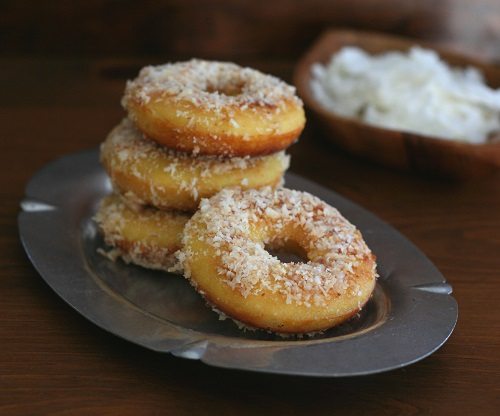 But fried donuts are another creature altogether.  They have an intensity that is unrivaled by other baked goods, by virtue of the fact that they are fried. In fat. And in my world, that’s a very good thing.  A healthy thing, assuming you are using quality oils and not yucky processed or hydrogenated stuff. Quality oils will soak beautifully into fried donuts, giving them a deeper, more satisfying flavour.  And they will be good for you too, as long as they are not full of sugar and other carbs. They will keep you full longer, give you more energy and increase your good cholesterol.  All that from a fried donuts recipe?  You bet.

But here’s the tricky part.  Almond flour and coconut flour don’t really lend themselves well to being cooked in oil.  Lacking the magical binding properties of gluten, things made with almond or coconut flour tend to simply disintegrate when subjected to hot oil.  I’ve tried it before, and ended up with a pan of oil and a lot of little bits floating around. Fried coconut flour crumbs don’t quite have the caché of fried coconut donuts, do they?  Plus I wasn’t ever sure how to get a nice round donut with a hole in the middle without special equipment. But my solution to this was rather brilliant, if I do say so myself. 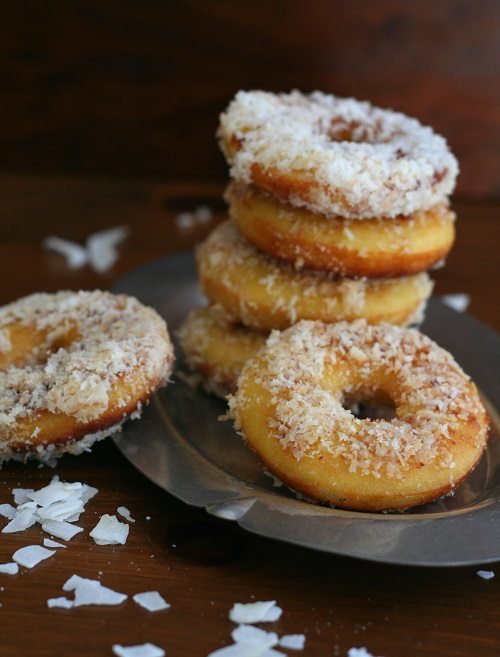 I baked them first and THEN I fried them.  Yup. These coconut flour donuts are baked and fried, and they’re awesome. This way, they hold their round, lovely shape, they soak in some lovely, healthy oil, and they taste phenomenal.  It’s an extra step, but it’s so worth it!

PS – I highly recommend using the Wilton Non-stick Donut Pan. I had a cheaper one, with smaller cavities, and it’s non-stick ability wore off quite quickly.  My kids bought the Wilton version for me for Mother’s Day and it’s been a treat to use. Treat it kindly so it keeps non-sticking for a while! I help my donuts release by inserting a thin rubber spatula between the donuts and the pan, and I always clean it with a soft cloth.

Looking for more tasty donut recipes? These Gluten-Free Cinnamon Sugar Donuts from Gluten-Free Palate and these maple-bacon doughnuts from It’s Yummi look amazing. They are not low carb, but I bet the recipes could be adapted! 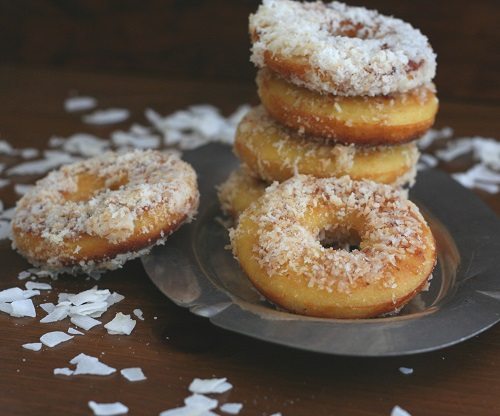 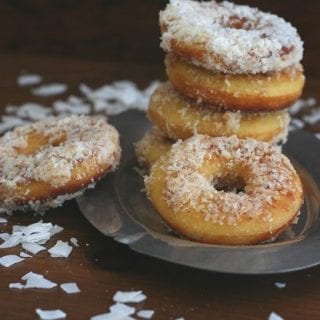