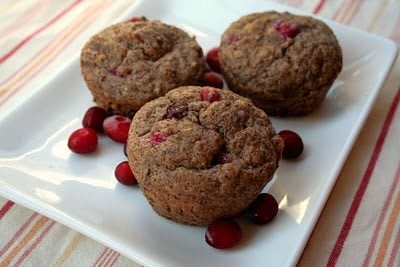 The last of the muffin recipes for a while. Well, perhaps I shouldn’t make promises that I can’t keep. I love muffins and since I’ve discovered some great ways to make them low carb, they are very much a staple in my household. They make for quick breakfasts and easy, satisfying snacks. And as long as you have some nuts or nut flours at hand, they are fast and easy to make too. The nice thing about muffins made without wheat flour is that you don’t have to be so careful in the mixing process. You could probably stir the batter for several hours and you would still end up with tender, soft muffins. No instructions not to “overmix” here!

I have made these muffins a few times and have learned some things in the process. They were originally conceived as a variation on low carb muffins made with almond flour. I wondered how other nuts would fair as the base ingredient and settled on pecans because I love them, and because I had a big bag in the freezer. But pecans are much oilier than almonds and they don’t grind up as nicely into a flour-like substance. This became clear to me as they began to clump together before they were finely ground. I stopped short of grinding them to a paste and ended up with something between a flour and a butter. I used this substance with trepidation, worried that I would end up with a melty gooey mess in my muffin tins, but the muffins came together better than I expected and even rose some. They were a bit crumbly, but they were delicious!

On the second go-round, I added some flax meal for its nutritional content and for its binding abilities. I also added a bit of xanthan gum, and reduced the number of eggs. Nut flour recipes often rely on quite a few eggs, to act as both a binder and a leavener in the absence of gluten. However, this can result in an “eggy”, slightly rubbery texture. Some people object to xanthan gum for a number of reasons, not least of which is that it is derived from bacteria, but I have found it very useful in my low carb/gluten free baking. Bob’s Red Mill Xanthan Gum is fairly expensive, but since most recipes call for only half a teaspoon or so, it lasts a long time. And Bob’s is completely gluten-free, whereas some xanthan gums are not.

The Results: I love these muffins, and they will definitely be a staple in my repertoire. Pecans have such an intense, sweet flavour that not much sugar substitute is needed. And the cranberries provide a tart foil to the sweet pecan flavour. The flax and xanthan gum helped to hold the muffins together better without changing the flavour, and there was no rubbery texture on the second batch. I highly recommend these to anyone in search of a great low carb muffin!

In a food processor, grind pecans until they begin to clump together and resemble a fine meal. Be sure not to over-process or they may become pecan butter.

Add butter, eggs and water and mix until thoroughly combined. Stir in cranberries.

Divide batter among muffin cups and bake 12-15 minutes or until top is set. Let cool in pan for 5-10 minutes. Run a sharp knife around each muffin and lift gently from tin (they stick a little bit but come up with a little gentle prodding).