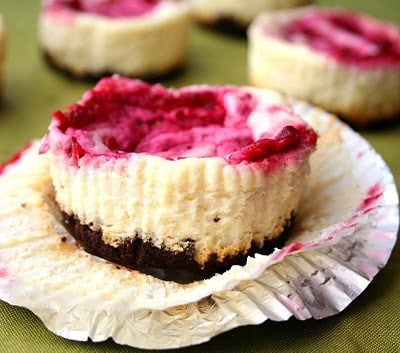 It was about a month ago, as I was standing in line at the grocery store check-out, that I saw exactly what I wanted to have for dessert on Christmas Day. There it was, staring out at me from the front cover of a cooking magazine, I hardly even know which one. A beautiful vanilla cheesecake, swirled through with what appeared to be cranberry, and with a gorgeous chocolate crumb crust. I didn’t buy the magazine, I didn’t even pick it up and thumb through it, I just took the image home in my head and started thinking about how I would recreate the dessert to be low carb and gluten free. Because dessert is important, particularly on special days like Christmas, and I was hardly going to skip it in deference to my blood sugar.

I also knew that I wanted to make the cheesecake in miniature. Growing up, dessert on Christmas always consisted of a platter of all the little cookies and cakes we’d been making, along with those given to us by friends and neighbours. As a child, I found it so exciting to be able to pick two or three sweets, my hand hovering over the plate as I tried to decide which one to taste first. It’s a tradition I have carried over into my own family and I love watching my children’s faces as they pick and choose. So my version of the magazine-cover dessert had to be small enough to share space with the caramel nut bars and gingerbread biscotti on the dessert platter.

The other requirement of my low-carb Christmas dessert was that it not be obvious that it was low carb. We were having friends over for Christmas dinner, and I wanted to make something that we could all enjoy. Cheesecake truly is one of the simplest desserts to make low carb and have it still be really, really good. The crust is the only part that takes much thought, but as I discovered with my Pumpkin Bourbon Cheesecake, nut-based crusts are as good as, or perhaps better than, graham cracker crusts. Beyond that, it simply requires substituting alternative sweeteners for the sugar, and which sweetener you use is really just a matter of taste. 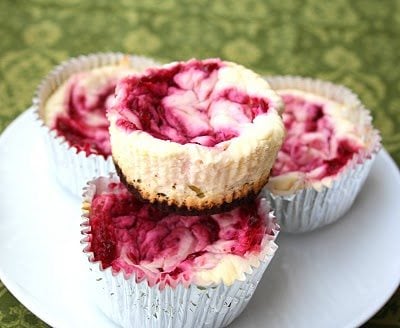 The Results: After telling you how important dessert is on Christmas, I have to confess that I didn’t even try my little cheesecakes on the actual day. I was too full from all the other wonderful food we’d had. But my husband and our guests tried them and gave them the thumbs up, saying they never would have known it was low carb if I hadn’t told them. And when I tried one the next day, I was more than pleased. The combination of chocolate, vanilla and cranberry is lovely, without any one part dominating the whole. And they weren’t overly sweet and cloying, as some cheesecake can be, just nice and creamy. 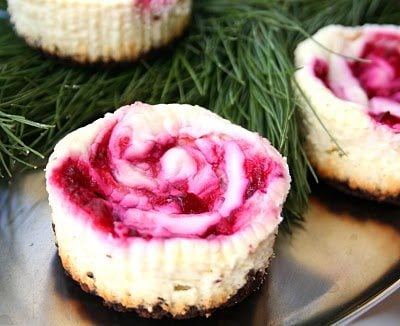 For the cranberry sauce, combine cranberries, water and erythritol in a heavy saucepan over medium heat. Bring to a boil and cook until berries pop and mixture thickens, about 8 minutes. Add stevia and mash berries with the back of a fork. Set aside and let cool.

For the crust, line a 12 muffin pan with paper liners and preheat oven to 350F. Mix almond meal, cocoa, sweetener and butter in a medium bowl until mixture begins to clump together. Divide evenly among prepared muffin tins and press down into bottom of paper liners to form a crust. Bake 8 minutes. Set aside and reduce oven temperature to 325F.

For the filling, beat cream cheese until smooth. Beat in erythritol, then egg and egg white, until each is incorporated. Beat in cream, vanilla and stevia until fully combined and mixture is smooth and pourable.

Divide filling among muffin tins, smoothing carefully with the back of a spoon. Dab one or two teaspoons of cranberry sauce over the top of each cheesecake and swirl with a toothpick to create a marbled effect. Bake until cheesecakes are puffed and set, 25-30 minutes.

Remove from oven and let cool completely, then transfer to refrigerator to chill for at least 3 hours. Remove paper muffin liners before serving.

Makes 12. Each cheesecake has a total of 10g of carbs, but only 3.6g if you subtract erythritol.