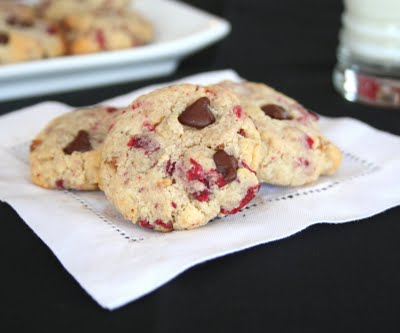 And here I thought I knew almond flour. Early on in this diabetes thing, I bought a bag of almond meal from Trader Joe’s, and used it in a couple of recipes. It performed admirably and so I thought I was all set. I knew there were other brands out there, some made with blanched almonds, and all of them more expensive. But I figured that there couldn’t be that much of a difference. A finely ground almond is a finely ground almond, after all. I even sometimes went so far as to make my own at home by grinding them in a food processor. Sure, my baked goods were not of as fine a texture as those made with wheat flour, but I figured that was just par for the course, something I’d have to live with as a low carb baker. I made my peace with it and went on my merry way.

And then I received some lovely samples from Oh! Nuts. You may remember the Cashew Ginger Granola Bars I made with their gorgeous cashews. Well, they also sent me a bag of their blanched almond flour and when I finished off the last of my Trader Joe’s almond meal, I opened it up. I instantly noticed a difference. It was much, much finer and since it was ground without the skins, it was paler in colour. And when I baked with it, I was more than a little impressed. It baked differently and the final product had a much finer, more flour-like texture. Since it doesn’t have gluten, I still had to compensate for that and add more binders and leaveners, but ultimately, it made a huge difference to the quality of my baked goods. 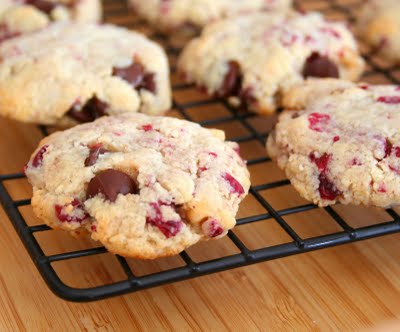 Now that I finally see the difference, I decided to tackle chocolate chip cookies again. The thing about baking without sugar is that it is difficult to mimic some of sugar’s qualities. Replicating the sweetness is the easy part. In that holy trinity of baking, flour, sugar and butter, there is something magical that happens that allows cookies to spread and become crispy and chewy at the same time. I just haven’t found a way to to make anything low carb and gluten free that even compares. Until now.

These were originally conceived to be breakfast cookies, and I thought that the dried cranberries and walnuts would make them more hearty. But I tasted the batter partway through and it was wonderful but rich, so I thought I should make them smaller and more dessert-sized. This is not to say that you couldn’t eat them for breakfast, because I will confess that I did. It’s just that they seemed more like dessert to me. I also used some grain-sweetened chocolate chips I found at the grocery store as I didn’t have the time or the patience to make my own low carb chocolate chips and these had about half the carbs of regular semisweet chips. And at the last minute, I decided to make them with coconut oil in place of the butter. 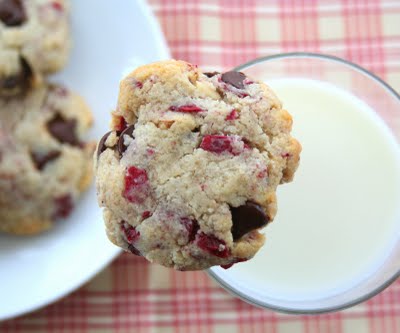 The Results: These cookies are phenomonal (or were phenomenal, because they didn’t last long). I would be lying if I said they were just like conventional flour-and-sugar chocolate chip cookies. They don’t have the same texture at all, and they don’t spread and get all crispy/chewy. But they are rockin’ their own special thang and it is a very delicious thang indeed. Because of the coconut oil, they almost melt away in your mouth as you bite into them. And the cranberries give a sharp little tartness that offsets the richness of the almond flour, walnuts and chocolate.

If I had more than two thumbs, I would give these more than two thumbs up. They aren’t just great low carb cookies – they are great cookies all around! I will be making these again for certain. Now, the tough part is that unsweetened dried cranberries are hard to come by. You can make your own, as I did before Christmas, with the recipe HERE. And I had some left over, which is what I used in these cookies. But in place of that, consider using fresh cranberries chopped in small pieces. The juice may run a little but I think it would work just as well. 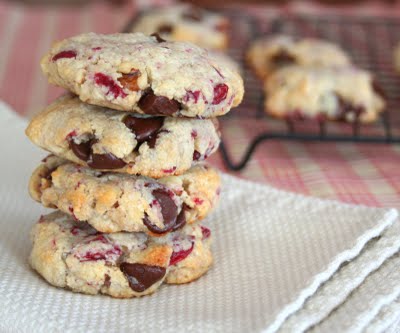 Preheat oven to 350F and line a baking sheet with parchment paper.

Form by hand into 1-inch balls, and place on baking sheet. Flatten with palm. Bake 7 to 10 minutes or until just starting to brown on top.

Let cool on pan for 5 minutes, then transfer to a wire rack to cool completely.