A deep dish Chicago-style pizza made low carb and gluten-free. This is the low carb pizza recipe you’ve been looking for! This post is sponsored by Jones Dairy Farm. 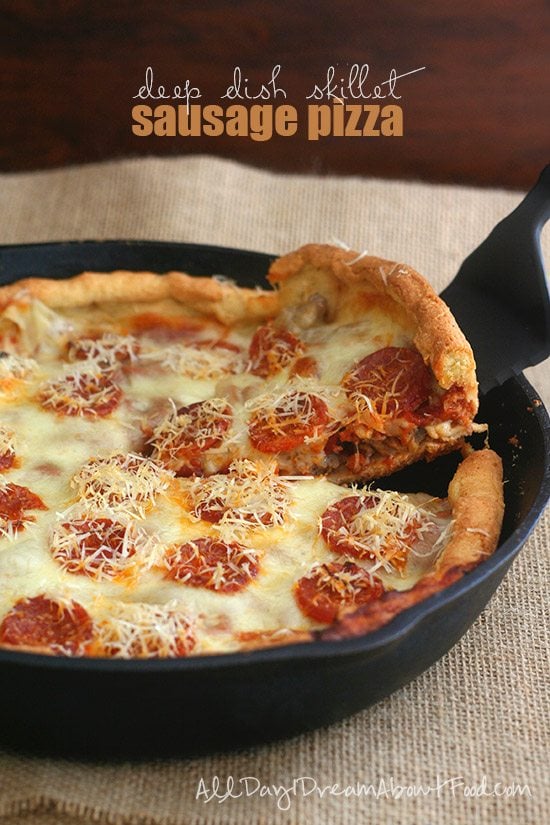 Ask most people who have recently begun low carb diet what they miss most and a huge percentage of them will say pizza. And can you blame them? Really, who can resist the smell and taste of ooey, gooey melted cheese atop a tender, bready crust, preferably dotted with plenty of meats and other delicious toppings? There’s so much to love about pizza and so much to mourn if you think you can never have it again. I am now an old-hand at the low carb game and I can resist a lot of temptation. I can smile politely to my server at a restaurant and decline the bread or the offers of dessert. I will happily ask for my burger to be served without a bun, because it’s the meat I’ve always liked best anyway. I can pass up the pancakes and waffles at a breakfast buffet in favour of the eggs and bacon. I am pretty good at this low carb thing, but pizza admittedly tests my strength of character. It smells so darn good and although it’s the toppings I like best, eating the toppings without the crust is kind of anticlimactic.

Now, I’ve made some really great pizza alternatives, as have other low carb and paleo food bloggers, and I have been pleased with my efforts heretofore. But this low carb deep dish pizza takes the cake. Or rather, it takes the pie. This is truly a “pizza pie”, with a tender-crisp crust and filled to the brim with goodies. It’s Chicago-style, of sorts, because of course I didn’t even attempt to make a flour-and-yeast based crust – that would be breaking the low carb code of ethics. But it’s definitely Chicago-Style deep dish pizza in spirit and I think you will love it. And what I loved about it is the way the toppings take precedence over the crust, because there’s just so much of them, but the crust still has great flavour and plays its part in keeping the whole thing together. You can eat this with a knife and fork, certainly, but if you let it cool a bit before serving, you can also pick it up with your hands. 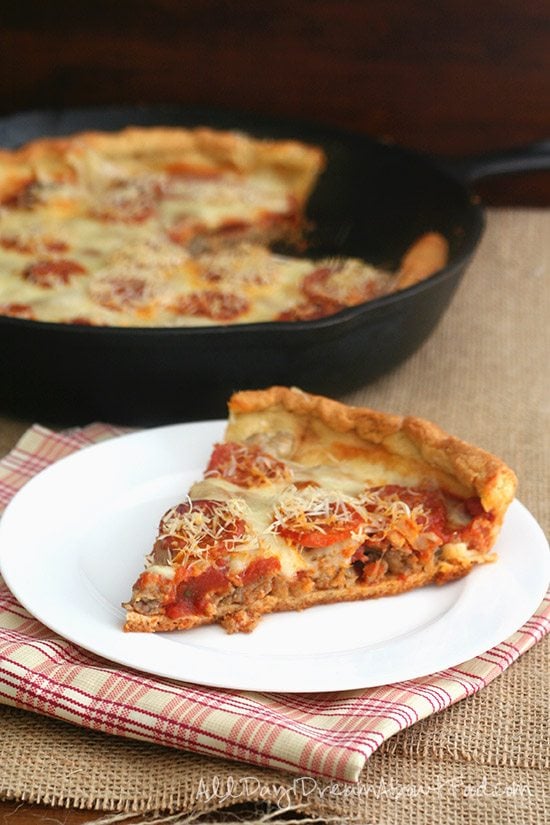 I made this delightful thing because the folks at Jones Dairy Farm reached out and asked if I wanted to partner with them and showcase some of their pork products. I’ve started noticing their white and green packaging in some of my local grocery stores, giving other brands of sausage and bacon a little competition. And good competition it is too, because Jones Dairy Farm is made without many the icky additives of other brands. Their all-natural pork sausage roll, which I featured in this recipe, contains 4 ingredients: pork, water, salt and spices. No high-fructose corn syrup, no MSG, and many of their products are certified Gluten-Free, making it a much healthier choice.

I’ve had this recipe in my head for a while now, so armed with a few rolls of Jones Dairy Farm sausage, I got to work. Originally I thought it might be fun to use my Cheesy Drop Biscuits as the crust. But the more I thought about it, the more I wanted the sausage, mozzarella and other fillings to take center stage. So I opted for an adaptation of the crust from my Mini Brie and Bacon Tartlets and I am so glad I did. With a little pre-baking, it crisped up nicely and it held up admirably to the fillings. Unlike flat pizza, the trick to deep dish is to layer your cheese and meat at the bottom, so the sauce doesn’t make your crust a soggy mess. And sliced mozzarella instead of shredded helps you create a good barrier between sauce and crust. I decided to throw a few slices of pepperoni on ours, to appeal to my kids, but another layer of sausage would be great too! 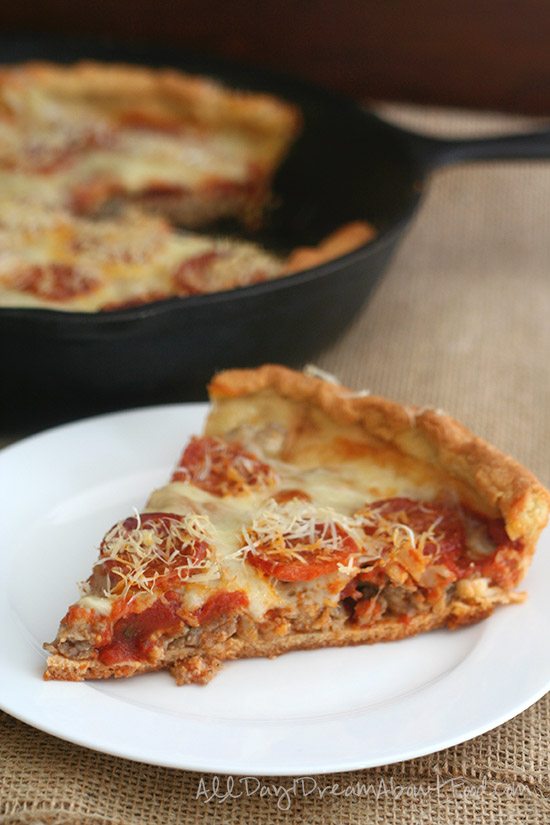 This post was sponsored by Jones Dairy Farm. All thoughts, opinions, recipes, photography, random tangents and incoherent ramblings are my own.