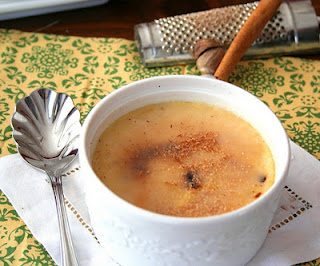 Okay, time to fess up…who’s afraid of homemade eggnog? Last year was my first ever attempt at making homemade eggnog and it turned out beautifully. I made it partly with almond milk, and was thrilled that it turned out as thick and delicious as regular ‘nog. But I also received a number of responses from readers about the fear of bacteria from the only partially-cooked eggs. And I get that, I really do. It’s hard to feel completely comfortable ingesting eggs that haven’t been fully cooked, especially after the huge salmonella outbreak of a few years ago. I know all of this in my head, and yet I often take the risk anyway, because I love eggnog and pastry cream and raw cookie dough. I simply can’t help myself.

This year, however, I am making my homemade eggnog worry-free, because I am making it with Safest Choice Eggs. You may have heard me mention them before, they are eggs that are pasteurized in their shell, so you can use them like any other egg. I got a chance to work with Safest Choice on another assignment back in May when I made Smoked Salmon Salad with Bearnaise Dressing, and really liked the idea of being able to make things with raw eggs and not having to worry. So I was delighted when they asked me to be a part of their 12 Days of Eggnog campaign this December. My task was simply to make some of their Classic Eggnog, and then to create a recipe using the eggnog to be highlighted on their website. Mine will be posted there tomorrow and other great bloggers have participated as well and have some wonderful recipes on there. Be sure to check them out! 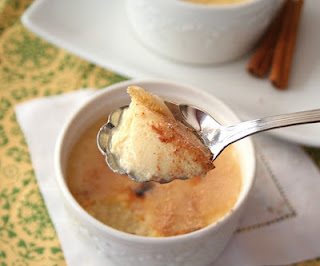 Making the Safest Choice Eggnog recipe was incredibly simple; much simpler than my homemade version last year. Because the eggs are pasteurized, there’s no need of even the small amount of cooking used in traditional eggnog recipes. You simply beat the eggs with the sweetener, milk, and cream, and away you go. You can bet I will be making all my eggnog this way with Safest Choice from now on, even if it’s just from sheer laziness! I made mine with almond milk and erythritol, to save on carbs, and again it turned out perfectly. But because I know not all my readers are low carbers, and because my recipe will be posted on their site, I wrote up a version that used whole milk and sugar as well.

Making creme brulee out of it was easy as well. I simply followed the eggnog recipe, but skipped putting in the whipped egg whites at the end. Then I heated the mixture to just steaming and poured it into the ramekins to be baked in a water bath. Because of the added rum and nutmeg, the final product had that distinctive eggnog flavour, in the form of one of my favourite desserts ever. It’s really a lovely dessert for the holidays. 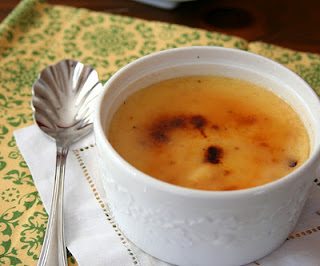 This post is sponsored and paid for by Safest Choice™ Eggs. All opinions expressed are mine. 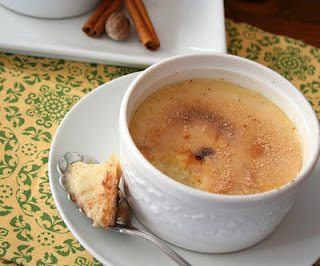 In a large bowl, beat yolks until combined.Gradually beat in erythritol or sugar until mixture becomes pale yellow and thickened.

Stir in cream and almond milk or whole milk.

Pour mixture into a medium saucepan and heat over medium-low until steam begins to rise and mixture is slightly thickened.Do not let it simmer.Offheat, stir in alcohol, vanilla and ground nutmeg.

Divide mixture between 8 small ramekins.Set ramekins into a larger glass or ceramic baking dish and pour hot water to within 1 inch from top of ramekins.

Bake until custard is just set but still wobbles when ramekin is shaken gently, about 40 to 50 minutes.Remove ramekins from pan and let cool, then wrap each tightly in plastic and chill for at least 2 hours.

Just before serving, divide remaining erythritol or sugar between ramekins, sprinkling evenly across the top of each.Heat with a kitchen torch until it bubbles and browns.Let sit for a few minutes to allow topping to harden.(You can also brown the topping under your broiler, watching carefully and turning the cups to ensure even browning).

Serves 8. For the low carb version with almond milk and erythritol, each serving has a total of 3g of carbs.