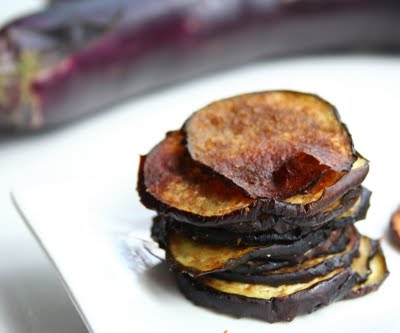 It’s no secret that I tend to become mildly obsessed with certain flavours and flavour combinations at any given moment. I daresay that this is an occupational hazard for food bloggers. We see something delicious on someone else’s blog, or in a cooking magazine or a cookbook. We test it out, perhaps with our own little twist. It’s delicious and we can’t stop thinking about it, our minds wandering to ever more elaborate creations containing this flavour. We want to put it in, on or under everything. And so we do, until the obsession passes. Or doesn’t pass, but sticks with us, in the backs of our minds, waiting for the next opportunity to assert itself. We may become mildly obsessed with something else for a little while, but we never quite forget our previous infatuation.

Such is the case for me right now with garam masala, that wonderful Indian spice blend. Garam masala isn’t one flavour really, but about a zillion little flavours coming together in one amazing combination. And there are about a zillion ways to make it, with everyone having their own specific recipe. For my part, I buy the commercial versions because I am not sure I can find some of the ingredients in my little corner of suburbia. Garam masala is not new to me, I’ve had it in many dishes before, some prepared by me and some prepared by other people. So why the sudden obsession? 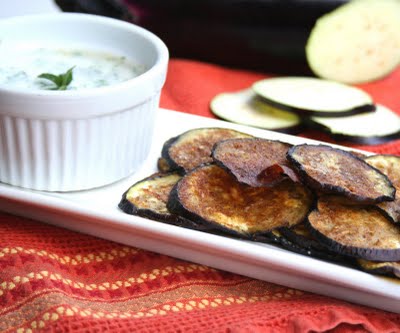 Well, a few months ago I saw a recipe for garam masala cookies. Yes, cookies. Don’t believe me? Check it out for yourself! I was, and still am, very intrigued and it’s definitely something I’d like to try. Then I saw a recipe for authentic homemade garam masala which brought it to my attention again. So I suddenly had garam masala on the brain and I knew I needed to do something with it. Something snacky, to fill that void between lunch and dinner when I inevitably find myself hungry for something really flavourful. 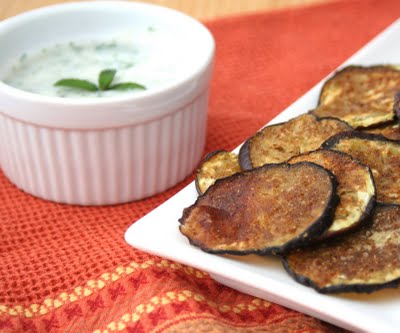 I also wanted to try making eggplant chips. I had noticed several times that if I sliced eggplant really thinly, it got quite crispy when oven-baked. And I saw a great post about that very thing on What’s Gaby Cooking, so I knew I was onto something. When I saw some beautiful Japanese eggplant at our local farmer’s market, it all came together. Eggplant and Indian spices are a match made in heaven, and it didn’t take long for the idea spicing up my eggplant chips with garam masala to take hold. 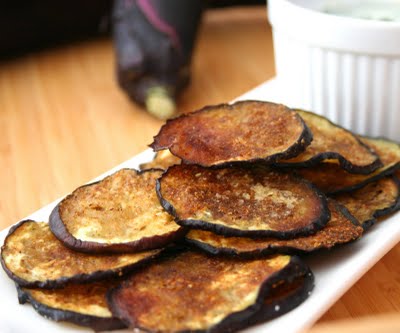 The Results: I may have officially found a snack food to rival my love of nuts. Oh my, but these were delicious. Crispy and salty and bursting with flavour. I had a hard time photographing them because I kept eating my subject matter. I snacked on them for the better part of the afternoon and I am pretty sure that when you eat a whole eggplant, it can no longer be considered low carb. I need to save these for the next time we have company because I cannot be trusted around them. But I suppose it’s a far sight better than me eating a bag of potato chips.

The raita is a nice touch, especially if serving them to company, as the creamy yogurt offsets the chips. But it’s really just window dressing, I liked the chips as they were.

One word of warning…have a light hand with the salt shaker until you’ve tasted them. Some garam masala mixes have a good amount of salt in them so you may not need to add much more. 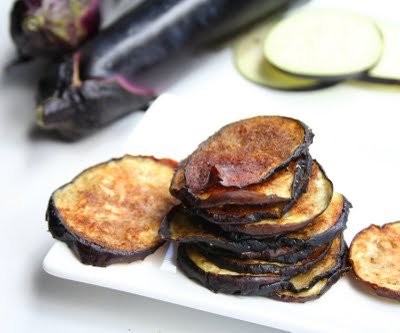 salt and pepper to taste

Cut eggplant into ¼ inch slices and lie in a single layer on a large parchment-lined baking sheet (you may need two baking sheets). Sprinkle with salt and let sit for an hour to remove some moisture. Blot dry with a paper towel.

In a small bowl, combine olive oil and garam masala. Brush both sides of each eggplant slice with the oil mixture and place back on baking sheets. Bake 20 to 30 minutes, or until slices are crisp and browned but not burnt. Remove from oven and sprinkle with additional salt to taste. Serve warm.

For the raita, whisk yogurt, cilantro, mint and cumin together in a small bowl. Season to taste with salt and pepper. Serve alongside eggplant chips.