Creamy and rich, this Keto Peanut Butter Pie can be made dairy-free or with full dairy. It’s a classic dessert for peanut butter lovers.

So you want to hear something a little crazy? I just created a totally vegan keto dessert by accident.

Yup, by accident. This Keto Peanut Butter Pie is dairy-free, egg-free, and completely free of any animal products. And I didn’t even mean to.

The reality is that I am not vegan in any way, shape or form. I believe eating animals is what humans are supposed to do. I believe it’s better for our health and our planet.

That said, I love playing around with my keto desserts and creating delicious treats for any number of allergies and intolerances. I have been making any number of dairy free treats lately and now have a full keto dairy free recipes category.

So I intended for this keto peanut butter pie to be dairy-free, and only later did I realize that it’s also vegan. But in case you prefer the full dairy version, I have included that too.

Whichever version you make, this is one spectacular keto dessert!

Keto peanut butter pie is nothing new – it’s utterly ubiquitous in the keto world. Almost everyone has a recipe for it, and they tend to be slight variations on the same theme: a low carb chocolate crust filled with cheesecake based peanut butter filling.

I actually have the filling part already covered in my Easy Keto Peanut Butter Mousse. And it’s delicious and comes to together in 5 minutes flat.

But all that cream cheese and whipped cream can make things not so friendly for the dairy-free crowd.

One thing that inspired this dairy free version is stumbling upon a new vegan cream cheese alternative from Violife. It’s surprisingly good and probably tastes the most like real cream cheese of any I’ve tried. It’s made primarily with coconut oil, but also contains potato starch. Don’t be alarmed, as the total carb count per serving is only 2g.

Another good option is Kite Hill, an almond milk based cream cheese alternative. Those two are the best dairy-free versions I’ve had.

With the cream cheese part of the recipe covered, I set about filling in the gaps for the other ingredients.

The crust was easy, as I simply used melted coconut oil to replace the melted butter. And instead of whipping cream in the filling, I used coconut cream and just a touch of coconut milk to help thin it out.

I created a little dairy free chocolate ganache with some additional coconut cream, and drizzled that over top of the chilled pie.

And to really take it over the top, I chopped up a few keto peanut butter cups for decoration. I used dark chocolate to keep with the dairy free theme. Either Lily’s or ChocZero would work well here.

It was so creamy and rich, and it was only as I was taking my first bite that I realized I had created a vegan keto dessert. I was amazed at how good it was, with no strange overpowering “fake cream cheese” flavor.

This is such a straightforward no bake pie, and it really doesn’t take much to put together. It takes less than 30 minutes to make, although you do need some patience to let it set properly!

Here are my best tips for getting the most out of your keto peanut butter pie:

This is a keto dessert that needs to be kept cold at all times, so store in the fridge and serve cold.

Wrap the leftovers up tightly with plastic wrap. Since this has no eggs or dairy, it can be refrigerated for quite a while. Up to two weeks… if it can last that long!

It can also be frozen for several months, tightly wrapped. I recommend not putting on any topping until you are ready to serve.

With just a few minor adjustments, you can easily make this pie with dairy.

Crust: Use melted butter in the crust, rather than coconut oil.

Filling: Use 6 ounces of softened cream cheese, and beat with the peanut butter and sweetener. Beat in the vanilla. If the mixture is very thick, add 2 tablespoons heavy whipping cream.

Replace the coconut cream with ¾ cup heavy whipping cream, whipped until stiff peaks. Fold the whipped cream into the peanut butter mixture and spread in the crust. 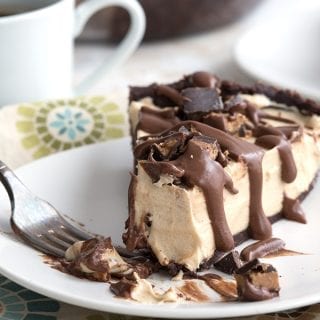