Homemade sugar free sprinkles are a fun zero carb way to jazz up all your keto cakes and cookies. Easy and fun to make, they take your keto baking to a whole new level. 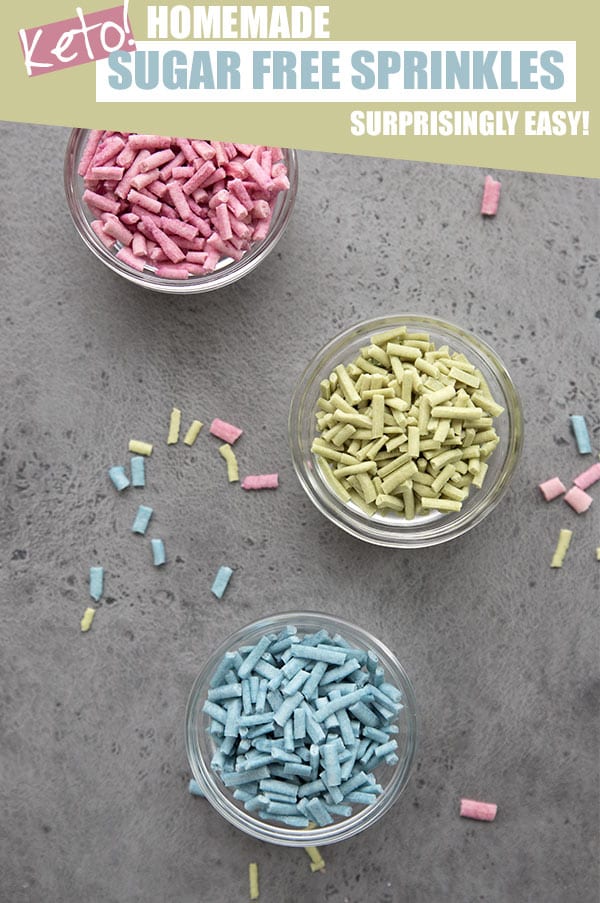 Sugar free sprinkles are a total game changer for the keto baker. And it never even occurred to me to try to make my own until a few months ago.

I don’t really love sprinkles myself and I never have. Pretty, yes, but essentially flavorless and I always used even them in really small quantities, even back when I was making high carb treats. Nice to jazz up a cake or a cookie but not something I really cared about that much. If I could decorate with chocolate chips or chocolate ganache, or maybe some citrus zest, I generally preferred to do that.

But kids love sprinkles and they do certainly do make for eye-catching sweets and desserts. And having three young children whose eyes tend to be caught be bright and colorful things, I have begun to understand the appeal. 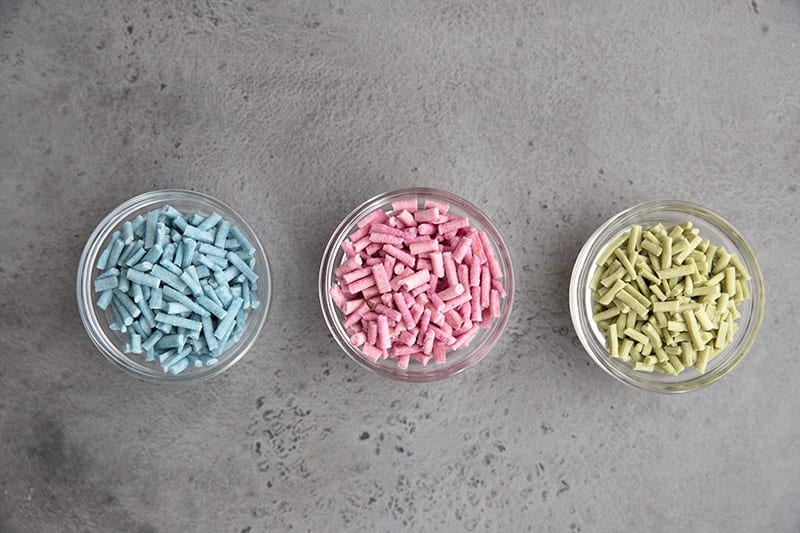 Do sugar free sprinkles even exist?

Sugar free sprinkles weren’t even close to a thing until just a little while ago. I sometimes would put a few teaspoons of regular sprinkles on some of my cakes and cookies, in order to please the masses.

It never even occurred to me to try a homemade version.

Then I saw one day on Instagram that you could actually purchase sugar-free sprinkles from a company aptly named The Sprinkle Company. I was in the middle of creating recipes for The Ultimate Guide to Keto Baking (due out in December!) and I got pretty excited about the possibility of using a few sprinkles on my baked goods.

So I reached out and lo and behold, the person behind these genius sprinkles was my keto blogging friend Nicole from Oh My Keto. She started selling her adorable sprinkles on Etsy and I was so delighted to give them a try.

She has so many fun colors and combos, and I’ve purchased them several times already. They aren’t cheap (because I am sure they take a lot of time and effort to make and ship!) but they are definitely worth the splurge for some fun recipes.

And apparently now Good Dee’s is making sprinkles too! I’ve got to check those out some time. 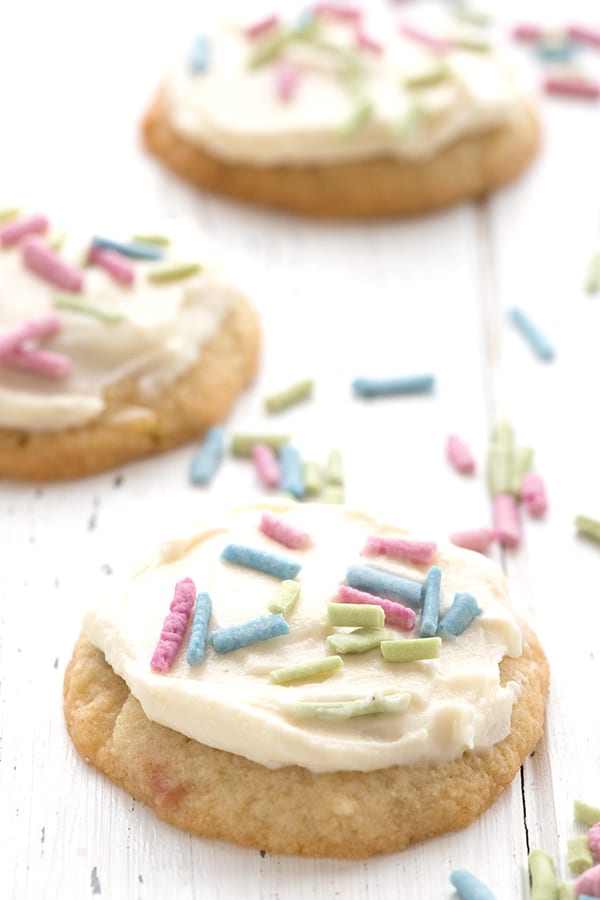 But then that crazy brain of mine started whirring and I wondered how you might make your own sugar free sprinkles at home. So I started doing some research and I came across quite a few homemade sprinkles recipes, including some for keto and sugar free versions.

A lot of the high carb versions took icky ingredients like corn syrup, but this recipe from Saveur seemed like it was ripe for a keto makeover. It took only powdered sugar, egg white powder, vanilla, water, and of course food coloring.

I read it wrong, though, and I thought it used liquid egg whites, so I grabbed a carton of organic egg whites and set about trying it out. Turns out my mistake was a good one and once I started playing with it, I realized I was on to something.

My first attempt created a colorful sugar dough, not unlike traditional fondant. I thought it would be cool to roll it super thin and cut out tiny circles for confetti style sprinkles. It worked but it was a hugely time consuming process and I gave up pretty early on.

So I added some water to turn it into a thick paste and did the regular skinny sprinkle thing, where you pipe thin lines onto waxed paper and let them dry, then chopped them up. Worked like a charm!

Then I had the rather inspired idea to spread the paste into a honeycomb silicone trivet similar to this one. This is how I used to make my sugar free chocolate chips. That way, I could have some confetti style sprinkles too. 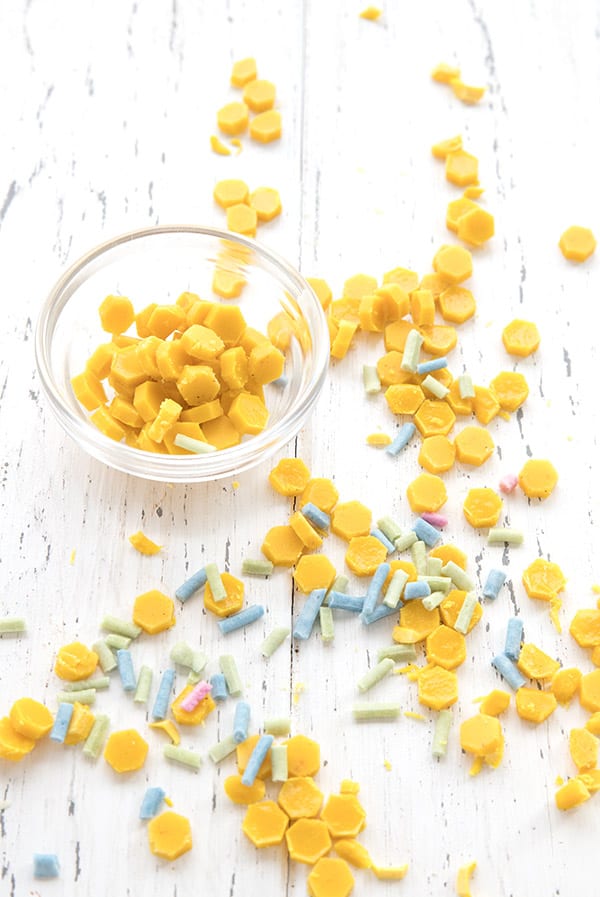 How to Make Sugar Free Sprinkles

They really aren’t that hard to make but they are very time consuming. So set aside a morning and plan on making a bunch so you can have them for multiple recipes.

The sweetener: You really need a powdered erythritol sweetener such as Swerve, because the sprinkles have to harden completely before you cut them up. Other sweeteners, such as Bocha Sweet, won’t harden properly and you will be left with some very pretty colorful goo. For once, the hardening property of erythritol is a bonus!

Egg whites: Similar to royal icing, the egg white in these sugar free sprinkles helps them harden and helps them keep their shape. Carton egg whites are pasteurized and easy to pour so they are the best choice here.

Food coloring: I like to use the vegetable dye powders from Color Kitchen. They are intense but as the sprinkles dry, they lighten to a pastel color. You can add more if you want more vibrant colors. The package tells you to add the whole envelope but that’s far too much. Just add a little at time, working it into the mixture, until you like the color.

A little water: You need just enough water to make the paste soft enough to squeeze through the opening of a piping bag. How much water can depend on what sweetener you use, how humid your environment is, and what kind of food coloring you use. Start with 1 tablespoon and add 1 teaspoon at a time after that.

Use ziplock bags for piping: You can totally use a piping bag and piping tips if you want but I found the Ziploc bags much more versatile. I would have had to wash out my piping tip between colors and this way, I could do them all at once. Just add the mixture to the bag, seal, and snip off the tiniest bit of one corner.

Don’t worry about being perfect: At times, my lines got wiggly and wonky. And some parts were a bit thick while others were super thin. In the end, once I chopped up the lines into sprinkles, it didn’t matter. They looked great as they were.

Let them dry completely! This takes at least 24 hours so have some patience. Put the baking sheet in a cool dry place and wait until they are rock hard. Then you can simply break them with your fingers or chop them up with a sharp knife.

Confetti Sprinkles: These take even longer to dry because the mixture is a little thicker in the honeycomb trivet. But once they are completely dry, you can easily just pop them right out. 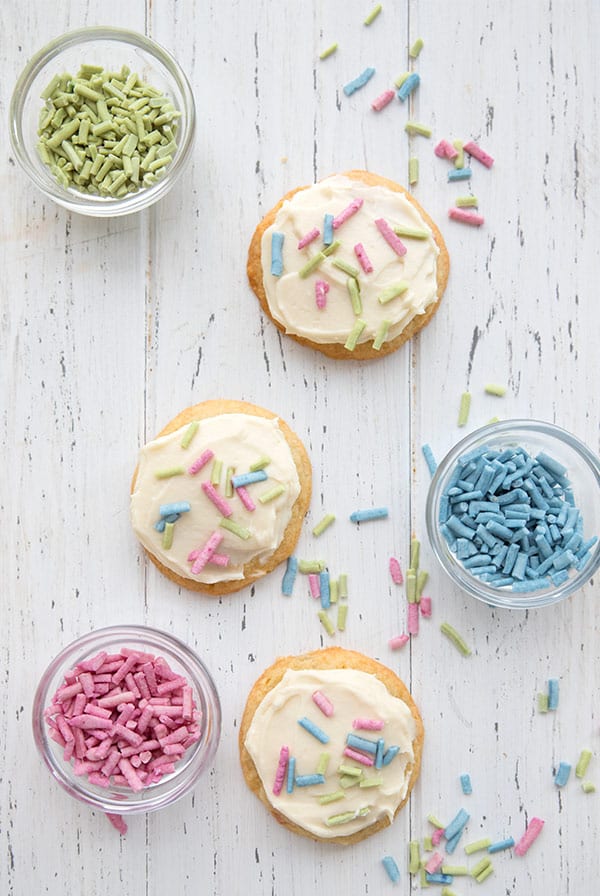 How to store sugar free sprinkles

These really don’t go bad and can last up for two weeks. Mine have lasted longer without issue but for safety recommendations, Saveur suggests 2 weeks.

Store in an airtight container at room temperature.

You are going to have so much fun with these homemade sugar free sprinkles. I have made several recipes with them already, one of which you see in these photos… Keto Funfetti Cookies are coming soon!

And seriously these homemade sprinkles have zero carbs and almost no calories. But they are so great for decorating all your favorite keto desserts. 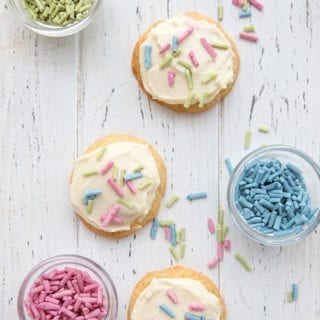 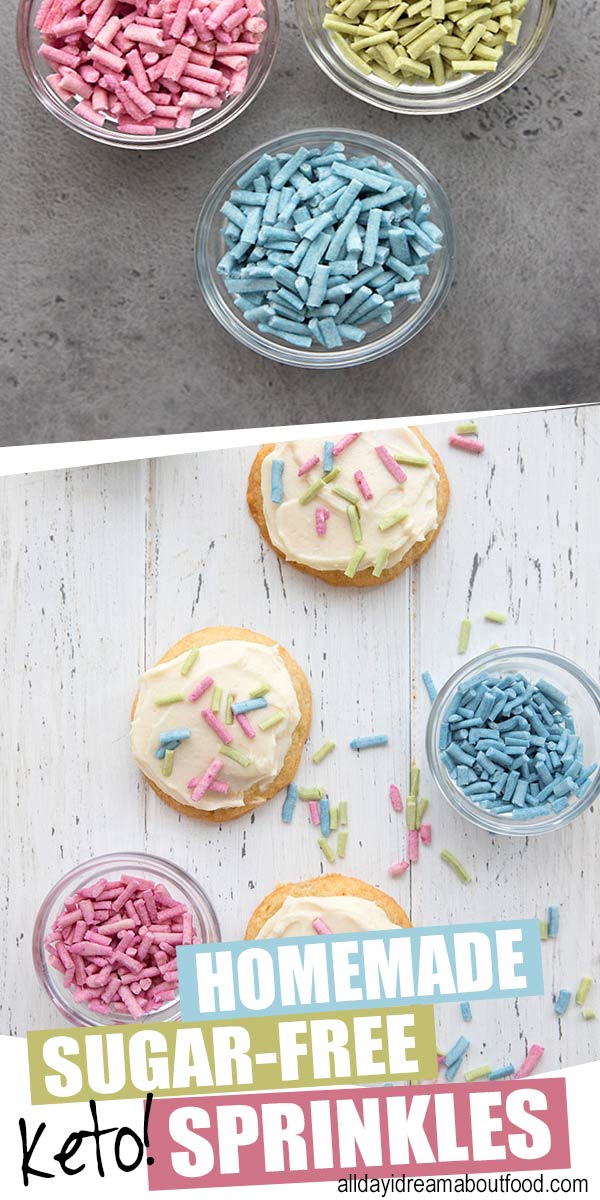