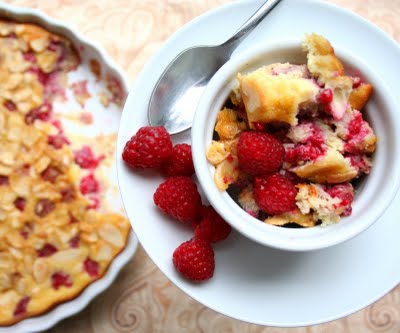 It would seem that I am now officially in the business of taking special requests on my blog. I love this fact. When I started this blog, I had no idea or expectation of where it would go. It is beyond thrilling that it would connect me to so many wonderful people. And to have readers who have faith enough in my baking abilities to make special requests? Well, let’s just say that the word “flattered” doesn’t even begin to describe it. I have had two special requests in the past few weeks. The first, from Diane, was for a low carb copy cat version of The Olive Garden’s Lemon Cake. Diane, I am working on this, I promise. It’s just a very large cake so I am saving it for a time when I have company to help us eat it! 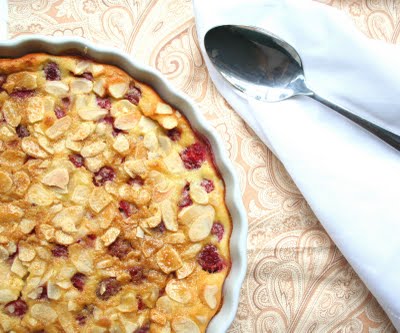 The second request I received came through the All Day I Dream About Food Facebook page, from Kay. She wanted to see a really creamy low carb clafoutis recipe. Never one to back down from a challenge, I knew I had to take this on. It certainly didn’t hurt that I’d been thinking of making clafoutis for quite some time. Not only had I never made clafoutis before, I am fairly certain I’ve never even tasted it, but I always loved the look of it on other blogs. And it seemed like a simple enough dessert to make, somewhere between a custard and a cake. Since it doesn’t contain a lot of flour to begin with, it seemed perfect for a gluten free, low carb makeover. 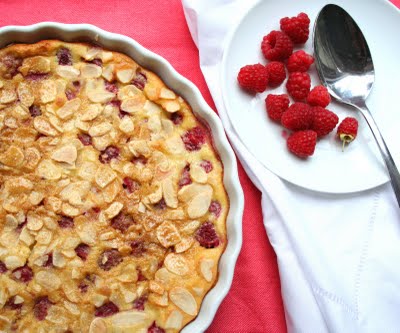 Sadly, the first thing that had to go were the cherries. The typical clafoutis is a cherry clafoutis, and I adore sweet, ripe cherries. But they aren’t particularly diabetic or low carb friendly. Thank goodness that my beloved raspberry, which is relatively low in carbs and high in fiber, was willing to play the roll of the cherries in my version. I knew I would be replacing the wheat flour with almond flour, and I thought it would be nice to bring the almond flavour to the forefront, as almonds and raspberries go so well together. I sprinkled the top with sliced almonds and a little additional erythritol. And since clafoutis strikes me as a rather “grown up” dessert, I thought I would throw a little Amaretto in there to really play it up. 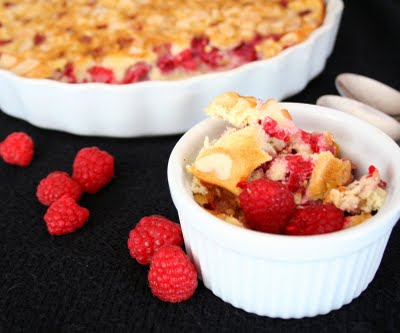 I consulted quite a number of clafoutis recipes online, and what struck me most is how much they all varied. Some contained quite a bit of flour and less eggs, making the dessert more cakey, and some were heavy on the eggs and light on the flour, making more of a custard. Kay requested a creamy clafoutis, so I opted to lean more towards a custard, heavy on the eggs and cream. But knowing that almond flour behaves very differently than wheat flour, I also opted to add a bit more of it to give the dessert some structure (i.e. so it didn’t sink too much in the middle after being baked!). All of this was really a shot in the dark, because I really had no idea how it would turn out. 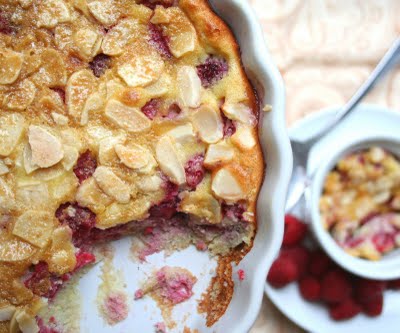 The Results: Having never made or tasted clafoutis, I really have nothing to compare this to, and I have no idea whether it will live up to Kay’s expectations. What I can tell you is that it’s delicious, with a perfect balance of raspberry and almond flavours. It was definitely more custard than cake, very moist and dense and studded with fresh berries. It wasn’t exactly “creamy” in texture, the way a creme brulee or a pudding would be. It was thicker than that, but it also didn’t have the crumby texture of a cake. From all the descriptions I have read of clafoutis, it seemed about right to me! And the sliced almonds on top became almost crisp, adding a nice textural difference to the rest of the dessert.

Perhaps Kay will do me the honour of giving it a go and letting me know what she thinks! Or if she tinkers with it and makes some modifications, she can suggest them to me. But I do love this as is and can definitely recommend it as a delicious dessert and a fabulous use of fresh raspberries. It’s actually really great for breakfast too. I should know, I had it two mornings in a row. 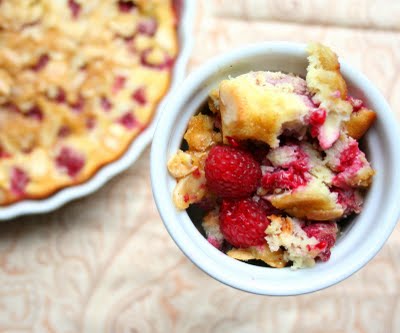 Preheat the oven to 325F and butter a ceramic or glass pie or tart pan.

Whisk almond flour and 1/4 cup granulated erythritol together in a small bowl, breaking up any clumps with the back of a fork.

If you have time, let mixture rest at least half an hour.

Arrange raspberries over the bottom of prepared pan and pour batter over. Sprinkle with sliced almonds and remaining 2 tablespoons of erythritol.

Bake 30 to 35 minutes or until set and top is light golden brown.