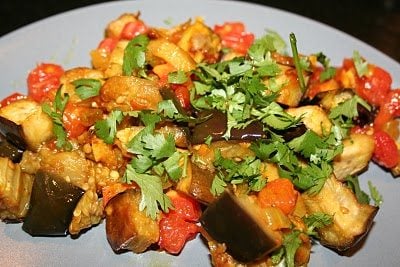 I don’t dare actually call this by the real name for the authentic Indian dish, Baingan ka Bhartha. If we’re talking about authenticity here, then I did this all shades of wrong. Lucky for me, it turned out all shades of right, as far as our tastebuds were concerned! One of those happy accidents in the kitchen, it would seem. I didn’t get many pictures because it was dinner time and we gobbled the whole thing up in one sitting.

Let’s start at the beginning. I had an eggplant and I wanted to do something with it. I didn’t know what. I typed “eggplant recipes” into my browser. I got lots of hits. The recipe that sounded most appealing came from Yahoo Answers, of all places – Indian Roasted Eggplant. But I was short a few of the ingredients. Did I feel like hauling all three kids to the store just to get some ginger root and a few fresh chilis? Nope. So I figured I would cheat with ground ginger and some jarred pickled jalapenos. After all, no one would have to know, right?

That’s when I made my biggest mistake. I had one of those moments where I figured I knew what I was doing before I had read the instructions carefully enough. This is not all that unusual for me; I am often so eager to start in on something that I rarely read instructions from start to finish before I am working on the first step. Being something of a quick study, it normally works in my favour. I am a whiz at ready-to-assemble furniture! But there are those times where I jump headlong in, only to discover I’ve made some irrecoverable error. My poor eggplant was the victim of my haste.

The Results: For all of my mistakes and substitutions, this dish rocked. Really. I would make it exactly this way again and I would recommend it because I think it was probably a little easier and less messy to prepare than the original. I am certain that the real Baingan ka Bhartha is an excellent dish and perhaps I will try it sometime. The taste of my version was probably quite similar to the real one, since the spices were mostly the same and my substitutions were minor. Eggplant is one of those versatile veggies that doesn’t have a ton of flavour on its own, so the spices are front and center.

The one thing I might do differently is to make a double batch. I bet it would make excellent leftovers!