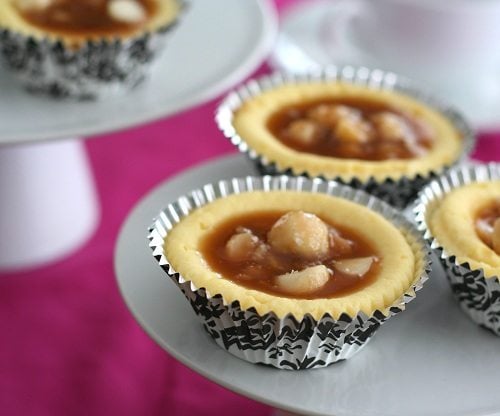 I am beginning to believe that almost anything is possible with low carb ingredients.  I suppose I shouldn’t say that until I have achieved the perfect yeast sandwich bread.  But the truth is that I haven’t even tried as my focus has been elsewhere.  I’ve been working on perfecting a few other items, things that I thought were lost to me for good after discovering my pre-diabetes.  One of those things that captured my attention is low carb white chocolate and white chocolate flavoured desserts.  I do love my dark, dark, dark chocolate, but sometimes that pale confection, which really doesn’t deserve the name chocolate at all, is what I crave.  And since white chocolate is really just cocoa butter, sugar and vanilla (and other fillers and stabilizers, for most commercial versions), I’ve learned you can skip the middle man.  If you are after white chocolate flavour in a sugar-free dessert, you don’t necessarily have to go all the way and make low carb white chocolate first.  You can get the flavour simply by adding the ingredients separately into the mix. 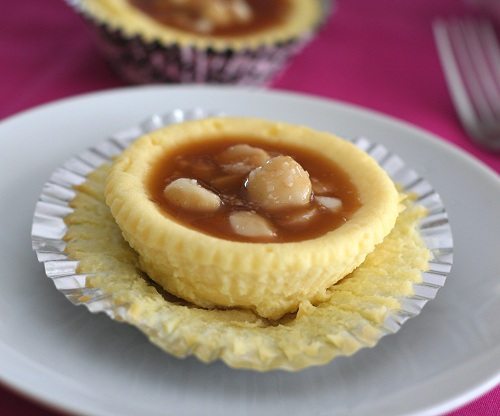 This white chocolate cheesecake recipe also uses another of the things I’ve been trying to perfect; sugar-free caramel sauce.  This one has been tricky, and I don’t think I am perfectly there yet, but I am close.  The problem with caramel sauce made with erythritol or xylitol is that neither of these sweeteners likes to stay in solution after being melted and caramelized, so they harden as they cool.  They taste like the real thing, but they don’t stay soft and gooey.  My preference would be to use erythritol because of it’s zero net carb effect on my blood glucose, but xylitol does maintain a softness for longer when in solution.  So I’ve been playing around with it and I tried a little xanthan gum in there, as xanthan inhibits crystallization.  But just adding xanthan gum can make the caramel sauce become really thick and gloppy, so a little more liquid is required to make it behave like true caramel. 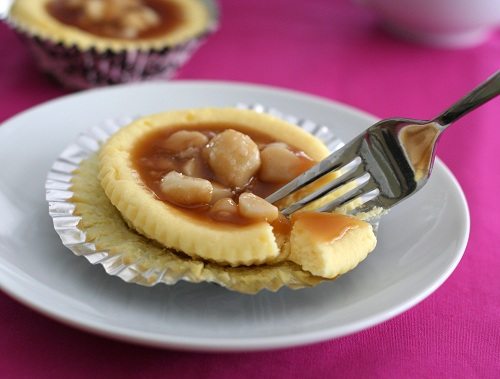 I am not sure I have the ratio exactly to my liking just yet, but I used my xylitol-based caramel sauce to fill these white chocolate cheesecakes and was mightily pleased with the results.  I dreamed up this recipe while munching on a handful of macadamias I’d bought from Trader Joe’s.  I just started imagining macadamias in a rich caramel sauce, drizzled over some sort of cake.  And what goes better with macadamia nuts than white chocolate?  I’d love to tell you that the way my individual white chocolate cheesecakes rose and then fell, creating a little well in the center, was by design.  The truth is that this unintended result dismayed me at first, but then I realized that it created the perfect way to hold the nuts and caramel!  And I was so delighted to see that my caramel stayed soft and gooey, even after chilling in the refrigerator for several hours.  Some re-crystallization did occur eventually from the xylitol, giving it a touch of grittiness, but it’s still a big step ahead from other low carb caramels I’ve made thus far.  And I will continue to work on it! 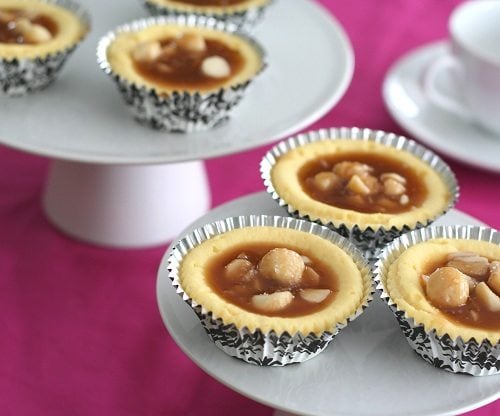 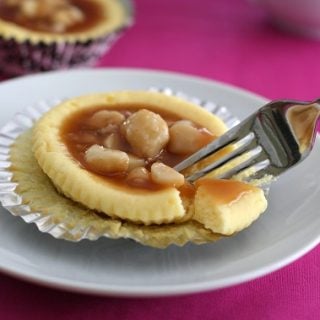