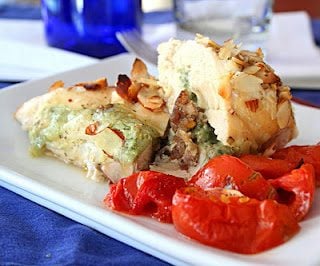 I am showing my age again by telling you this, but back when I was in high school, Ontario still had Grade 13. They were the only province that still had it, and they phased it out about a decade after I graduated. It was an interesting system, because you could actually graduate from high school by the end of Grade 12, as long as you had 30 or more high school credits. But you couldn’t go to university unless you had 6 or more Ontario Academic Credits, or OACs as we called them. By the time I finished Grade 13, I had 9 OACs, mostly in the liberal arts like English and the Social Sciences. But I did have a Chemistry OAC as well. It wasn’t my most spectacular grade, but it wasn’t my worst either (that dubious honour belonged to Calculus). As the sciences went, I enjoyed Chemistry, the mixing of several ingredients with known properties and expecting a certain result. I suppose it’s why I also like cooking, although cooking has the added advantage of producing something edible, and presumably delicious, at the end. 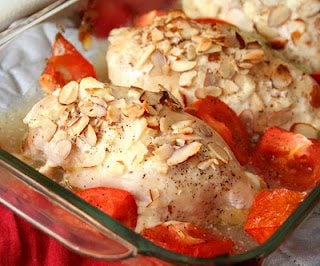 Apparently this view is shared by my assignee for this month’s Secret Recipe Club, whose blog is aptly named The Cookin’ Chemist. I couldn’t find her real name anywhere on her blog, so for the purposes of this post, she will forthwith known as The Chemist. Or perhaps the Pharmacist, as that is her listed occupation. Whatever she is called, she has a great blog, with lots of wonderful recipes to choose from. When I found out my assignment, I poked around a little and had tons of ideas from that first foray. I was very tempted by these Stacked Roasted Vegetable Enchiladas, and was scheming how to sub in thinly sliced eggplant for the tortillas. But then I made a return visit, and the minute I saw this recipe, I knew it was the one. Chicken breasts stuffed with cheese and basil…easy to put together, delicious, and something the whole family would love.

But you know I couldn’t leave well enough alone, I had to change up the recipe in a few ways. First of all, the bread crumb topping had to go, being neither low carb nor gluten free. I considered replacing it simply with almond flour or other ground nuts, but then the idea of sliced almonds popped into my head, and I knew that would do very well. The idea of adding sausage to the filling was just plain old fashioned last-minute inspiration. And although cherry tomatoes would have been lovely, I couldn’t justify buying a pint when I had some of the last of my summer tomatoes ripening on my counter. So I quartered and seeded those to use instead. 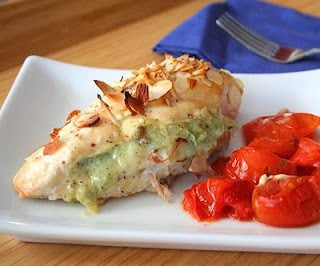 The Results: I am so glad I took the time to go back to The Cookin’ Chemist before I decided what to make! Because if I hadn’t, I would have missed this little gem entirely. It is so, so good, and it’s a basic enough recipe that many people have the ingredients on hand at any given moment. It’s pretty easy to throw together, too, so it makes for a great weeknight meal.

Although it’s not part of the original recipe, I highly recommend brining the chicken breasts beforehand and have added that step into the instructions. This recipe may be very good regardless, but I guarantee you it is a little better with this step included. I’ve made a lot of chicken in my day, and breasts baked in the oven can get dry, no matter what goodies they are stuffed with. Brining the breasts for an hour makes them juicy and tender, every time. But don’t brine too long…they can get too salty if you leave them for more than an hour or so. 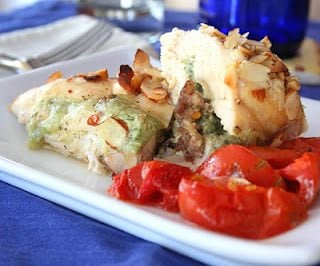 To brine the chicken, fill a large bowl halfway with water and add the kosher salt. Stir until most of the salt has dissolved. Add chicken breasts and refrigerate for one hour (don’t let it sit too much longer, the chicken will get really salty).

Preheat the oven to 425 degrees F. In a medium bowl, combine the shredded cheese, sausage, basil, cream, lemon juice, garlic, and salt and pepper to taste.

Remove each breast from the brine and pat dry with paper towels. Cut a pocket in the thickest part of each breast. Stuff with cheese/sausage mixture and seal using a toothpick to help keep the slit closed (I found I had to use two toothpicks per breast). Transfer the stuffed breasts to a 9×13 inch baking dish.

Spread mayonnaise evenly over the tops and sides of the prepared breasts, then sprinkle with sliced almonds, salt and pepper.

Toss the tomatoes with the olive oil, 1/2 teaspoon of salt, and pepper to taste. Arrange the tomatoes in the baking dish in and around the chicken. Bake until sliced almonds are light golden brown and chicken is cooked through (165F in thickest part of breast).

Serves 4. Each serving has 5 g of carbs (including the tomatoes).

Check out all the great posts for this month’s Secret Recipe Club!